1v1.LOL from JustPlay.LOL is a 3PS mobile multiplayer in the battle royale category. The essence is to defeat your opponent, while you can use not only firearms, grenades and various blades, but also fast craft. Create shelters, impede the advance of the enemy, go around or use an elevation. You decide what the battlefield will be like. At the same time, you do not need to get materials. Just look for equipment all over the map. The game emphasis focuses precisely on active battles. In fact, the project is analogous to games such as Fortnite and PUBG Mobile, but designed for weak devices. Focus exclusively on multiplayer, so you will need a stable high-speed Internet channel to access it.

1v1.LOL focuses exclusively on online battles. Each user controls a robot. If you are interested in this kind of gameplay, then read our review.

The main feature of the project is the ability to quickly craft right during the battle. You can create almost anything here, including floors, walls, doors, windows, and more. Nothing prevents you from erecting a whole shelter, but be prepared for the fact that it can be broken in just a few blows. It is best to use this mechanic in order to gain an advantage over your opponent. This way you can go around it, hit from above or run away. 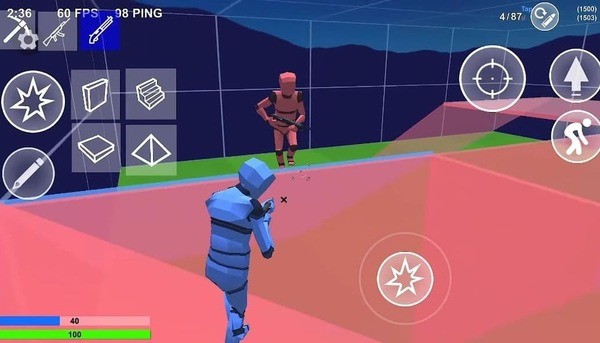 Each character appears on the map with unlimited ammo and building materials, two weapons and a pickaxe. The construction in the game is implemented as simple and intuitive as possible. Any object consists of several walls that you can edit by simply tapping on them.

Quick selection of the enemy

1v1.LOL is designed for online battles only. There are no tasks other than daily quests, which can bring you a small reward. There is no story-mode, that is, a single-player campaign with a single story. This makes the project friendlier to beginners and those who are just getting acquainted with the genre, but also less interesting from the point of view of experienced gamers. In any case, the application fully meets the declared category. You should definitely not count on an interesting and well-developed plot in it. At the same time, you will be pleased with the almost instant search for opponents. The game is still quite popular, so you will not have any problems with users.

Everyone can play free

To make it easier for everyone to navigate during the game, the creators have made simple and convenient controls. Even if you have never played projects like this, you will quickly learn. More importantly, the project is provided completely free of charge, and you will not have to invest at all. The developers regularly release updates and additions, which makes the gameplay more interesting and entertaining.

As for ammunition, players gets a standard set of ASR, a shotgun and melee weapons, such as an ax or a pickaxe. It is not worth using sniper rifles on such small maps. There are also tons of customization. All guns are available for upgrades, but this will not affect their characteristics. At the same time, the possibilities for customization in 1v1.LOL are rather scarce in general. 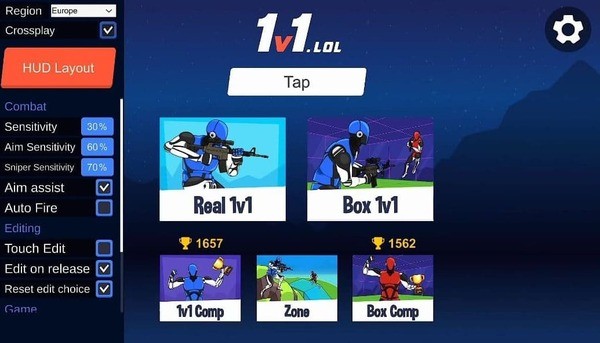 Generally speaking, 1v1.LOL in question is an excellent option for a pleasant pastime. The developers have introduced high-quality three-dimensional graphics, simple and convenient controls, as well as pleasant musical accompaniment.

As mentioned above, there are not so many skins here, but they are still there. To differentiate yourself from your opponents, we suggest you download a mod that unlocks all skins. In addition, we removed all ads from the game.

1v1.LOL is a construction simulator and an amazing sandbox, in which all fans of creative shooters will find a lot of interesting and inimitable. Choose his hero from several dozen proposed and dive into clashes with online enemies and AI bots. All battles will take place on all sorts of three-dimensional maps filled with resources, shelters, structures and terrain. Battles will delight in woodlands and villages, bases and bunkers. Player have to use tactics and all kinds of weapons and equipment, but also traps, fortifications and other calculations. Various building materials are suitable. Use them to quickly build a redoubt, build a bridge for a crossing or even an aircraft. Install 1v1.LOL on your mobile device and try to defeat enemies in the initial stages. Run around the map and navigate around, noticing all opponents and resources for construction. Try to craft and design various buildings. Use rifles, pistols and machine guns, cold weapons, create all kinds of traps and traps. Use different tactics, try to join forces with your friends on the network and take part in amazing team competitions.

1v1.LOL is great entertainment for the evening, a great way to have fun with friends, and a good choice for those with a weak enough device. The application does not depend on donation, which is already a big advantage.