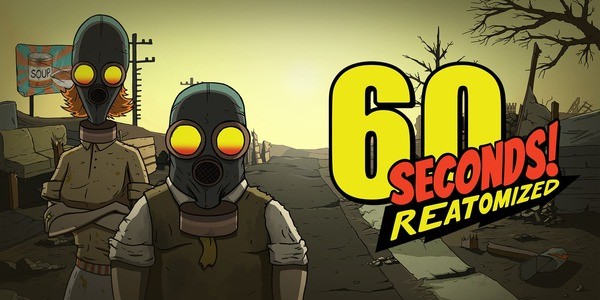 60 Seconds! Reatomized is a new part of the popular game from Robot Gentleman. Initially, the project release was on PC and PlayStation and its port appeared on Android in May 2021. The game takes place in the near future, where the Third World War broke out. You play as the head of Ted family. You and your family need to have time to hide in the bunker, while taking along the essentials. Only one minute is given to get ready! Try to survive several months in a bomb shelter with only a meager supply of food. Make forays to the surface, complete tasks, heal and feed your family members. It will definitely not be boring. The game ending literally depends on every decision you make, so you determine where the application script takes you. We also advise you to download Fury Survivor: Pixel Z and Unholy Adventure.

Previous games in 60 Seconds! Franchise enjoyed great popularity with the audience. The project under consideration has every chance of even surpassing the success of its predecessors.

Be in time in a minute!

60 Seconds! Reatomized begins with the fact that you heard an alarm siren, being in your house. The countdown begins from this moment and you have only a minute to have time to run into the basement. Not everything is so simple, because the main character also has a wife, as well as a son and a daughter. It is necessary to have time to run up to them, take them by the hand and take them to the basement. It would also be nice to take the essentials. You have only 60 seconds for all this! However, if you suddenly do not have time to pick up someone from the family members, then nothing cardinally terrible will happen. The further plot will develop without this character, changing the game ending. In our case, we did not take our daughter with us to the bunker – she was terribly annoying by playing the trumpet!

The countdown of the days spent in the bunker begins after all family members get there. There is special diary entry in 60 Seconds! Reatomized, which tells about the state of health of each character, whether he is hungry, and so on. Periodically you need to complete tasks. For example, one day you need to go to the surface for supplies. Players have to choose one of the heroes and send him there, starting from his state of health at the current time. The fact is that any character can get sick and simply cannot bear the influence of radiation.

By the way, you have a limited supply of tomato soup and water. Every day you need to distribute food between relatives, but keep in mind that stocks are strictly limited. Keep track of who wants what and try to save as much as possible. You will find a little supplies in the story, but this does not happen often enough. One of heroes may require medicines in case of illness, which are available only on the street. Sometimes the game prompts you to make a choice. For example, you find a mysterious suitcase at the entrance to the hideout. Should you open it or not? Suddenly you heard a pungent smell of rotten stuff in the wall. You can pull out a couple of bricks and find out the source of this smell, but on the other hand, maybe it is better not to risk it?

While Apocalypse is the main mode of 60 Seconds! Reatomized, the developers have prepared other interesting points. It all starts with training, where you need to follow the commands of your assistant. It is necessary to learn the basics of management and prepare for evacuation. There is also “Survival” mode, where you need to carefully distribute supplies between the survivors and always choose the least unpleasant option for you. The challenge is ideal when restarting a campaign. Mistakes are not forgiven here, so you have to act decisively.

The application features mainly in two-dimensional graphics, except for initial locations. However, it is noticeable that the developers were attentive to project creation and put whole soul into it. Each object on the map has detailed drawning, so 60 Seconds! Reatomized will give you a lot of fun while playing.

60 Seconds! Reatomized is a very high quality game, and such projects are rarely free. It happened this time too, because in official sources you have to pay a little more than three dollars for the application. However, you can download the game free using our version.

However, that is not all! We also suggest you to download a game with a mod for unlimited resources – water and food. Now you do not need to puzzle over which family member to feed. Nevertheless, the game may lose interest with this mod, so let everyone decide for himself to use it or not.

60 Seconds! Reatomized has nine different endings, both positive and tragic. These endings depend on the items in your inventory at the end of the game, as well as on actions performed during the adventure. Your family can be saved by the military, men in black or mysterious twins. There are also two neutral endings. As for the bad scenario, you may die, lost the bunker or tortured by the Inquisition.

Keep your sanity in order, as it is the main criterion for the survival of family members in 60 Seconds! Reatomized. There are several ways to support it: talking to the heroes, letting children run around the bunker, listening to the radio. There are also moments that negatively affect the mind: not enough food or starvation, loneliness.

Survive at any cost and do not disdain robberies. Occasionally, the game throws you children/schoolchildren, elderly people, whom you can rob and get precious loot from them. Sometimes you can run into stronger rivals. They, in turn, will cripple you.

Exchange provisions wisely. When you have the opportunity to play cards or trade products in 60 Seconds! Reatomized, think with your head. For example, gambling is a rather controversial way of replenishing food, since you risk losing your last food supplies if you play to the last. It makes sense to trade when you have an excess of one product (as an option, water) and a shortage of another (food). In other matters, when playing cards, you need to follow the commandment “If you have resources that you do not mind losing, then play. However, never take risks”.

60 Seconds! Reatomized is a great game with almost no analogues. If you value humor in applications, and love survival simulators, then do not pass by this project.