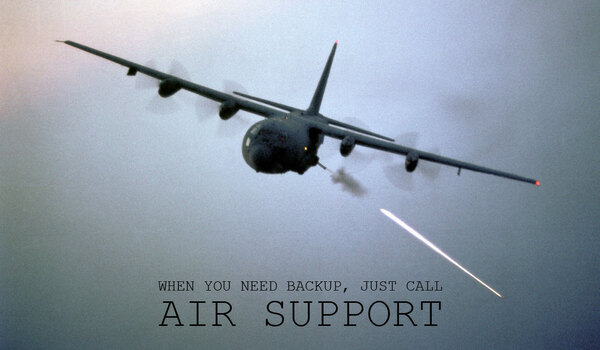 Air support! – Action from Supersonic studio. The game is a massive action shooting game. Destroy enemy units in every possible way. You will be able to build and fortify the base along the perimeter in order to hold the defense. Sit at the helm of a combat helicopter to rain bullets on enemies. Command troops that face numerous opponents face to face. This game features elements of strategy, so now the gamer not only goes through levels with destruction of zombies, but also protects his base from attacks and also begins to attack enemy fortifications. Upgrade some used weapons significantly with the help of earned in-game currency, which you can obtain by completing tasks. Also, download Awesome Tanks and Zombie Gunship Survival.

If you want to know all the details about Air Support!, then read our review.

Pass a difficult and dangerous test, protecting your life in a zombie apocalypse. It offers you to sit at the helm of an attack aircraft to clear the city from bloodthirsty creatures. You have to look at the world through the sight of the weapon installed on the plane.

The first victories associated with the successful completion of missions are also inspiring, so this game is great for gaining confidence in your abilities. The gamer can study the area using a night vision device and shoot at the monsters that are in sight. Shooting is automatic, so you only need to aim at the enemy.

First mission will send you to the cruise ship where the infection occurred. It is necessary to help the Special Forces detachment, providing air support. You have a powerful machine gun in your hands, so aim, trying not to hurt your own. A machine gun can destroy not only enemies, but also clear the path.

Missiles can destroy iron gates, stalls, abandoned cars and more. Specific task awaits you at each level, completing which you will earn money and experience points. Use currency to upgrade the control system, sight, as well as build up firepower

After you and your team return to the base, you can start pumping. Strengthen your fortress and make it impregnable for the dead. Build various structures and much more to help you survive. Do not forget about your plane, which needs improvement in the same way.

Unlock various types of weapons and install them on board. Buy various power-ups, because each new flight will only become more dangerous and more difficult. Get ready for new flights and cover your squad again to complete the next mission.

The mod that we offer you to download allows the player to make purchases even with an insufficient account balance. We also removed all ads from the game.

Air support! is a very interesting game that provides gamers with ample opportunities to win. Gamers who have installed the new application will be able to fight against aggressive evil spirits at the helm of a powerful fighter. Control a combat aircraft equipped with deadly weapons, a sea of ​​adrenaline, a dynamic fight process and excellent rewards are waiting for you. Fans of spectacular adventures can put aside fears and doubts in order to become a real hero who can stop the monstrous catastrophe that threatens humanity.

Armament in Air Support! is also as close to reality as possible, which contributes to the maximum drive of the struggle process and acquisition of interesting experience. The game focuses on the principles of authenticity and realism, thanks to which participation will become even more exciting. Gamers can enjoy the process of struggle, associated with many unforeseen situations and poignant moments. The fierce confrontation with bloodthirsty creatures must end in victory, so the main task of the pilot is to demonstrate unsurpassed skill.

Air support! is an exciting project in which you need to become a combat pilot and shoot enemies from the air. Strengthen your base, achieve success and win.