ALTER EGO is an interesting adventure project that contains both elements of a work of art and a set of psychological tests. This allows you not only to have fun, but also to learn a lot of frank and new about yourself. Questions and answers, negotiations with strange characters, a selection system await you here. Interesting story and non-linearity coupled with an attention-grabbing style of graphics in the spirit of manga will make any fan of cool original games happy. In its vastness, it will be possible to act correctly, observing all the rules, or to surrender to the will of your emotions and see what will come of it in the end. If you are interested in adventure, we also recommend downloading Rob Riches and Very Little Nightmares.

The game appeared in Play Market at the end of 2018 and has more than two million times downloads. 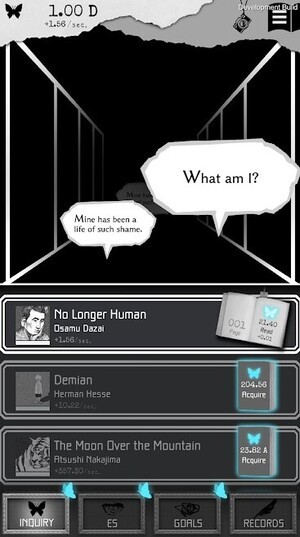 Interpretation changes the nature of the game world

After researching the gameplay, it becomes clear that ALTER EGO is not only a clicker with buttons stylized as psychological works. Here you have to pass tests, talk to a huge stone bas-relief and help a cute girl. Quite quickly, the main plot will make itself felt. Ego is a local currency that opens plot doors. You will have to tap on the clouds with thoughts – obtained from the test results. In addition, you need to read books to accumulate currency. Each book has a small description. For those who like depth – a quote after a certain number of pages.

The narrative element is too small to call ALTER EGO itself a novel, but not to say that the semantic load is not enough. The plot comes down to interaction of three main persons – Façade/EgoRex – that two-faced stone foundation that meets you at the very beginning, Es – the Girl, irritably reacting to your presence, and the traveler – the player himself. Every conversation with Es offers you a choice, while all dialogues look harmonious and appropriate. Each choice can greatly affect the further fate of the hero, but you should not attach too much importance to them.

The overall plot leads to three main endings. First, if the choice of impulse prevailed over restraint. Second, if Façade convinced you of the need for logic in actions. After receiving the first two – in something that satisfies both parties. Depending on the choices made, the state of Es and its relation to the player will change. You can generally talk to her every three hours after getting the correct ending. That is, she will really offer you to choose one of three books and then she will give her assessment of the work. Well, just about something cute once a day. 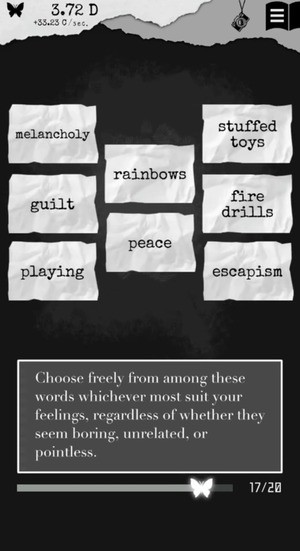 ALTER EGO features many static pictures, made in black and white. This is not to say that the graphics in the game stand out from the competitors, but the unique style of the developers is noticeable.

ALTER EGO mod for free shopping allows you to take advantage of all the possibilities of the game. We offer you to download it. Install the game using SAI (Split APKs Installer). You also need to use Lucky Patcher for the mod to work correctly.

ALTER EGO gameplay consists of two parts. At first, you find your hero in a dark place, where the walls and ceiling move directly towards the protagonist. Clumps of clouds begin to appear from the darkness with certain philosophical thoughts and statements depicted there. You need to click on these clouds and thereby replenish the game currency, which will be useful to you in the second, main part of the gameplay. 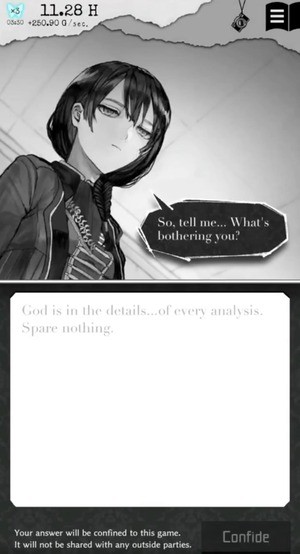 Spend money on various improvements, which ultimately allow you to earn additional currency. When there is a lot of it, then you can get to a new location, where you need to pass the test and get a kind of psychological portrait based on the answers received. The tests are simple. You will see an image that characterizes this or that action, attitude towards people and so on. See a question, which says what you think about this, and how you could describe what you saw. Choose the answer you are interested in and click on it.

After answering the tests, you will return to the clicker and earn points for passing new tests. At the same time, you need to act not on speed in this mode, but on attentiveness. Click on the clouds with thoughts exactly at the moment of its displaying and nothing earlier.

ALTER EGO is a very unusual game with a rather unconventional gameplay and features that may appeal to everyone who is tired of the usual clickers and wants something new.