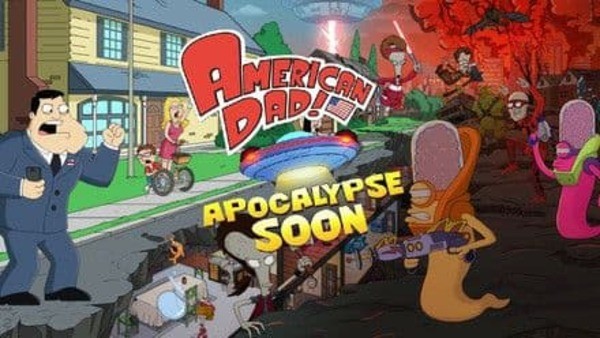 American Dad! Apocalypse Soon is a vibrant game that can grab the player’s attention for days and months! It allows you to plunge into a fascinating world of adventures that bring pleasure from a well-spent time and penetrating the world of your favorite animated series. Take on the role of Stan, who must save his entire family from alien captivity. During the game, your character builds a shelter, clones aliens, creates an army and frees his city. Good play and great humor guaranteed! By the way, there are other games based on famous TV series on our website. For example, The Simpsons: Tapped Out and South Park: Phone Destroyer.

American Dad! Apocalypse Soon appeared in 2019. The app has over 5 million downloads and has a 4.2 rating from live players. The age limit for players is +7 years, although some official resources require 12 years old to start playing.

American Dad! Apocalypse Soon begins with a story told by an alien living in the Smith family. Take control of this character and use him during the whole game. Find out more about the capture of Stan family members, how to save them and create the necessary equipment and buildings. One of the main Roger advantages is a skill in creating technology. He was that person who created a cloning machine, thanks to which it is possible to create an entire army of aliens to fight the invaders. Moreover, you can perform minor household chores that Stan did not have time to do. 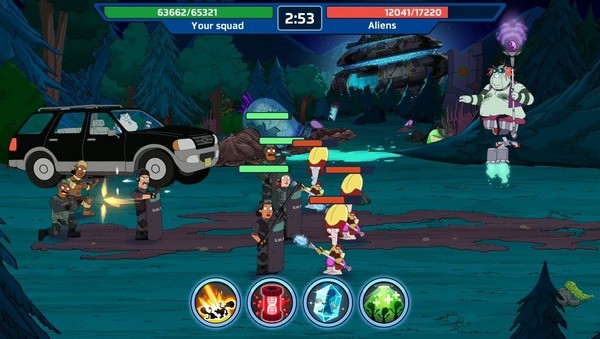 Creating an army in American Dad! Apocalypse Soon requires not only a special device from alien Roger. You have to equip a secret base underground and provide Smith with everything he needs. The player has to create production, training and support facilities to provide resources for defeating evil invaders from another planet.

Only the Smiths go into battle

The main protagonist of American Dad! Apocalypse Soon has a lot of battles ahead. Initially, you have to fight only with aliens. Battles take place as part of tasks received by the player. Defeating one alien or boss brings you reward in form of in-game currency or necessary items. Another battle option appears after the destruction of ten enemies in different locations. For winning such battles, the player can get a reward in form of alien junk that will definitely come in handy. You can also fight in tournaments or simply compete in the power of your own Smith with other real players.

Graphic design of American Dad! Apocalypse Soon has bright colors. The general graphics style coincides with the original series and copies the characters of famous cartoon saga. We can say that the developers tried their best in drawing all game elements. Such an approach creates a special game aesthetics – everything looks very colorful and entertaining. Sounds and music also complement the picture to create the unique atmosphere of the cartoon on the screens of android devices. 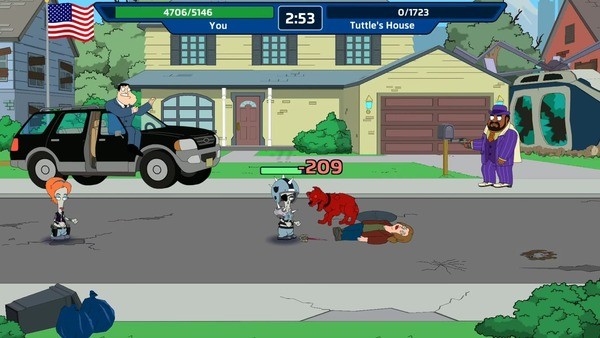 Great results require a lot of money, which you may not have enough when playing the regular version. To ensure yourself an easy and quick fight against alien invaders, we offer to download American Dad! Apocalypse Soon with a mod for unlimited money. With its help, you can easily establish the production of clones at the highest level and recapture your city from the invaders as early as possible.

We have tested the game and its performance. Our team also tested the app for safety. We can guarantee absence of viruses and malware, as the game is completely safe. At the same time, our mod may not work on some devices due to constant game updates by developers. We try to solve this problem to offer you optimal version that can suit all users without exception.

Your main task in American Dad! Apocalypse Soon is to save your family from aliens who have captured the entire city with Smiths! In order to cope with this task, Stan has to turn his home into a defensive outpost that can give rise to a resistance movement throughout the country! In addition, the player has to create a powerful shelter in his basement, as well as a laboratory for creation of clone army.

The storyline campaign is a sequence of levels, each of which can immerse you in a serious battle. However, all battles take place automatically. Your main task is to prepare the detachment in order to repulse the enemy. Meet not only aliens, but also Satanists, distraught citizens, marauders and so on. The main indicator of the detachment is its overall power, which is perfectly visible in numbers. 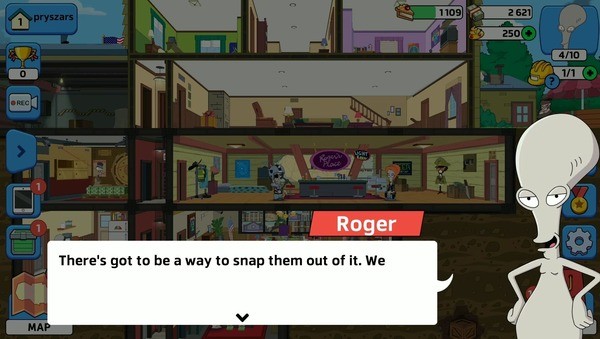 Your main force in American Dad! Apocalypse Soon is Roger and his army of clones. Every fighter has set of skills and abilities. You can easily put a new clone not in the garrison, but in generate electricity. Clone types open as you progress through the campaign and get special containers. Therefore, you always have the opportunity to find equipment for your fighters.

Try this excellent game, as it allows you to laugh heartily at the main character, his adventures and mistakes. Moreover, players get an opportunity to develop strategic thinking and have high-quality fun!

Delete the original version of American Dad! Apocalypse Soon before installing our modified version to prevent errors during installation process.