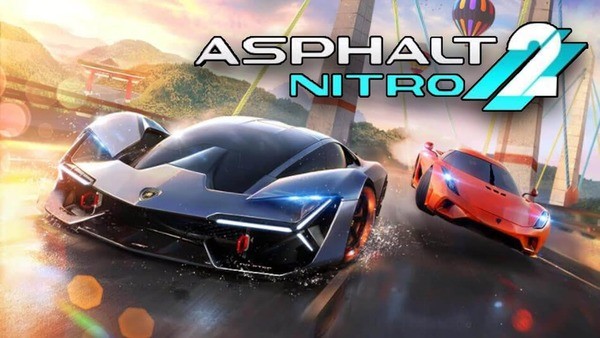 Asphalt Nitro 2 is the continuation of the legendary racing series from the Gameloft SE studio, where players can enjoy high-quality 3D graphics, high speeds, good selection of cars and tracks. If you prefer speed and the gas pedal to conventional projects, then here you will find many interesting features and fun modes. You have the opportunity to compete with both real users and artificial intelligence. At the same time, the developers have added a large number of visual effects and a good soundtrack. The application has a whole collection of real licensed cars. Enjoy famous brands such as Ferrari, Lamborghini or Porsche, go on high-speed trips to the most beautiful places from all over the planet, complete exciting tasks along the way and perform cool mind-blowing stunts. Do you like racing? Download also Crash Drive 3 and Bridge Race.

Read on to find out all the details about this game.

For greater dynamics in Asphalt Nitro 2, you will find a huge number of different tracks equipped with jumps, high slides, as well as sharp turns. Use them to make virtuoso jumps or go into a skid like a real street racer.

Fly into the air on numerous jumps, perform breathtaking stunts and be on top. All tracks have own characteristics and secret areas, where various trampolines are conveniently located. Accelerate and take off. Some roads have multiple landing tiers. Fly over the bridge or try to get straight on it, skillfully using all the features of the road.

Gather a collection of the best cars

All cars in Asphalt Nitro 2 are divided into classes – A, B, C and D. Open your fleet and replenish it with new acquisitions. Unlock the most exotic sports cars and customize them in your favorite style. Maximize their power and show off a huge selection of cars for any game mode.

Adjust each car to a specific track, so you can choose which car you will drive the next race at any time. Unlock all categories from slowest to fastest like the wind! Set records, unlock rare rewards and in-game currency. Compete with other players and take the leading positions in the rating.

Having accumulated enough in-game currency that you earn after the races, you can purchase many different cars of famous brands. Renault, Chevrolet, Nissan, Ford, Mercedes, Jaguar, BMW, as well as the famous kings of the roads Ferrari, Bugatti, Lamborghini, and many other incredible cars await you.

There are three game modes in Asphalt Nitro 2: Career, Quick Race, and Multiplayer. In a fast race, you just have to set up the track and immediately go to an exciting race. The same will happen in online mode, because the race does not take place in live mode, but with real people.

When you want to start your racing career, you will have several seasons waiting for you, each opening after the number of stars gained in the previous season. The tracks pass through the vastness of Africa, America and Europe, which you can find in real life. There are enough types of races for a variety: classic, elimination, knockdown, duel, slalom, infection, capture, escape. It is worth noting that you can even play as a police officer, cleverly trying to catch all criminals who violate the speed limit.

The most amazing thing about Asphalt Nitro 2 is that the developers somehow miraculously managed to create a racing arcade that does not take up much space, but at the same time is a full-fledged project. It may seem that the matter is in graphics, but no, the graphics component of 3D is at the highest level. They just came up with a new algorithm for generating tracks and locations when loading each race. This allows you to avoid permanent storage of hundreds of megabytes on the device.

The graphics in Asphalt Nitro 2 boast of high-quality elaboration of car textures. All textures fit perfectly into the environment, but have smaller polygons than the drawn sports cars. While driving along the track at the highest speeds, you do not even have time to see the surrounding objects. The race takes place at a frantic pace thanks to the use of nitro, the cylinders of which are scattered throughout the map.

Asphalt Nitro 2 has only one in-game currency – credits. It is necessary for pumping cars and purchasing new models. So that you can make your car the fastest, we suggest downloading a mod for unlimited amount of money.

The gameplay in the application is similar to most existing races and is almost an exact copy of Asphalt 9. Here players can enjoy a nice menu, several modes and the possibility of improving cars. You have a choice: compete in speed with other players, challenge your friends online or complete the storyline, which includes dozens of tasks and bosses.

For victories in Asphalt Nitro 2 races, you receive rating points, as well as earn credits, which are necessary for pumping and buying new cars. Now, the developers have implemented more than ten available sports cars, each of which has its own characteristics and driving characteristics. You can pump the parameters manually. There is also the possibility of temporary enhancement due to special boosts that you can buy for in-game money. Interesting feature of the gameplay is that if on the track you crash into your opponent or push him at full speed to the side of the road, he crashes and leaves the race for a while.

Asphalt Nitro 2 turned out to be fascinating and at the same time innovative, because all the maps and textures that the players see are generated automatically at each race. Thanks to this technology, the developers were able to minimize the size of the game, so it takes a little more than 50 megabytes, but with it possesses three-dimensional decorations and cars. If you are a fan of this series of games, then you definitely need to download this project.