AXES.io is a cool blocky style action game that offers a huge selection of modes and incredibly epic battles. In addition to cool graphics, the developers of CASUAL AZUR GAMES studio have prepared a large selection of locations, characters and melee weapons. The main feature of the project is that you can fight using only swords, spears, shurikens, axes and more than 40 varieties of ancient weapons. Go to huge arenas where dangerous opponents and bosses are waiting for you. Destroy everyone you see in real time with cool soundtrack. If you are a fan of battle royale then we can also offer PUBG Mobile Lite and Bullet Echo.

The more you are in thought, the more your future rivals upgrades, so quickly look at the main game advantages.

AXES.io gives you the opportunity to watch live gladiator fights. Be prepared as only the most concentrated, agile and attentive fighters are able to survive. Your actions must be accurate and correct so that you do not have to suffer because of mistakes made. The developers did not add the usual duels, but simply added the countless arsenal of available weapons. Use different items that bring variety to the gameplay. Users note that the game is very different from competitors, which favorably distinguishes it from the rest. 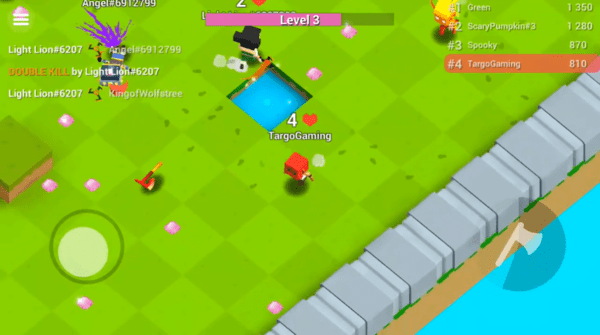 The more you kill opponents, the higher you climb in the rating. Each new level in AXES.io opens up tremendous opportunities for you. Already from level 2 you can take with you as many as two axes instead of one. Moreover, the more enemies are defeated, the more weapons you have. Next, an ax and a shield become your arsenal – to protect yourself from enemy attacks. This is important when fighting off an attack aimed at you. Then you can control sword, no longer throwing axes, but plunging enemies in this way. With each next stage, you unlock new element: a second shield or sword, a dagger and more. However, there is a minus – if you were defeated, the level starts from the very beginning.

The main direction of AXES.io is multiplayer mode. You just need to kill all your enemies, take weapons and money. Do not be afraid, you won’t get tired of endless action, as the number of enemies constantly grows along with defeated opponents. Every game battle lasts no more than 3 minutes. If you have real money in your gaming account, you can extend your life. However, keep in mind that this is less fun than just starting from scratch and fixing your mistake.

The graphic design of AXES.io corresponds to all the canons of arcade projects. Blocky characters are a nod to everyone’s beloved pixel art projects that Minecraft has set in fashion. The graphics are top notch, so users can immerse fully in what is happening on the screen. The game can run even on outdated devices. In addition, the soundtrack perfectly complements the interesting gameplay. 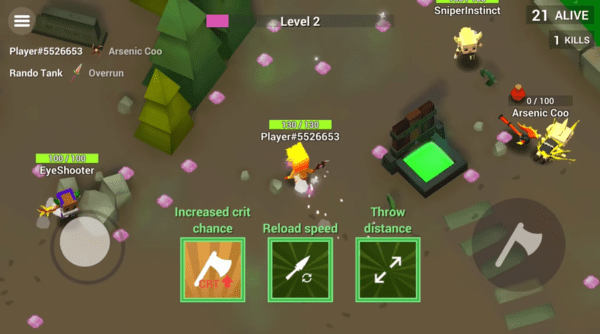 We present to your attention a mod for free purchases and unlimited money for AXES.io. With its help, you can freely open chests with rare weapons and armor. Moreover, you can unlock almost any character. It is worth noting that the higher the level of your character, the more unique skills he has. Another feature is the possibility of using unlimited amount of money for respawn right during the battle. Using this technique, you can easily win any battle.

We tested the mod for free shopping and unlimited money for AXES.io. Based on the test results, we can guarantee its full functionality and performance. After the first launch, you get access to above advantages. The only thing that is required of you is to undergo training. After completing, you can start upgrading your character the way you want. Please also note that some weapons and armor unlock only after reaching a certain level. Therefore, do not forget to participate in battles to expand your arsenal.

You have to show all your skills to achieve your goals. AXES.io has several modes with many different features. The gameplay of each mode is very familiar to everyone who starts it. Appear in different places, find scattered weapons, and methodically destroy each enemy. If you die, the fight ends. However, if you become the last survivor, you receive the title of winner and great rewards.

The battles in AXES.io differ in dynamics and a short time interval. The creators made the maps small so that you don’t have to spend a lot of time looking for the right weapon. As soon as you kill the enemy, you get the necessary experience. After leveling up, players get access to special abilities that help make the hero more powerful. The maximum level of is 10. At first, it seems that this is too little, but soon you realize that it is very difficult to get to it. 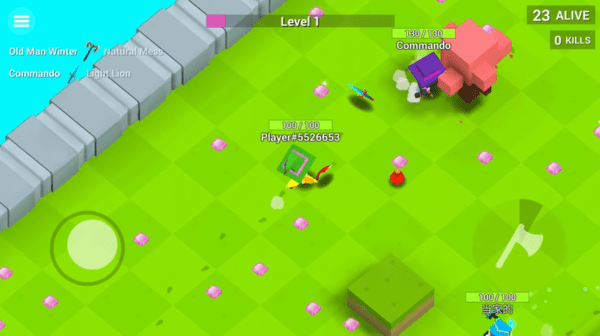 Before starting the battle, you must choose the appearance of your hero. The developers of AXES.io have added many types of weapons to make it more interesting to choose the right one. It is not only purely visual in nature, but also has several amazing bonuses. You receive them every time you use a certain type of weapon. Some of them provide high reload speed, others add ammo, and still others add speed to movement and much more.

AXES.io is an excellent game that can delight all lovers of action and multiplayer mode. Here you can enjoy the easy and interesting gameplay with simple and intuitive controls. Meet new comrades and opponents, which you can send to Valhalla using your own strong hatchet and accurate eye. Feel like a real Viking who knows no mercy towards his enemies. Reveal different types of characters that differ not only in appearance, but also have unique abilities. We recommend all users to download AXES.io.

How to Install AXES.io Mod?

Don’t forget to delete the original version of AXES.io before installing our modified version to prevent errors during installation process.