Bad Piggies is a mobile puzzle game from Rovio. In fact, the app is part of the Angry Birds franchise, but displays the gameplay from the perspective of pigs. Take on the role of an egg thief, show ingenuity and tactical genius in solving various problems, and get breakfast for king. As part of the gameplay, you will construct various mechanisms with which the pigs can cross obstacles on the way to the nest. Meet old friends, Angry Birds, who will interfere with your task in every possible way. On the way to the nest, various difficulties and dangers await you like any other engineer. Calculate everything so as not to damage your green team on the way to the bird’s treasures and do not let the evil birds frustrate your plans. Also, download Garden Balls and Age of Caves: Idle Primitive. 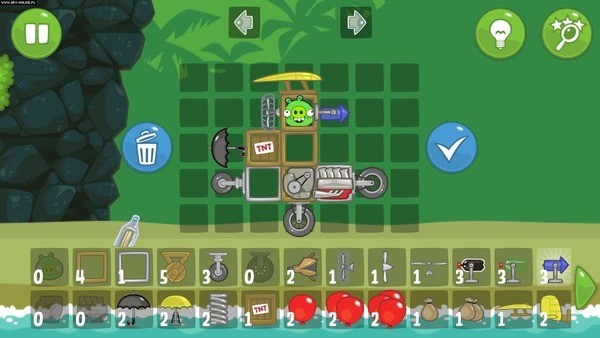 The cunning pigs want to get to the eggs again. They have the necessary materials, but they need your help to build the perfect vehicle. Build a flying, crawling, rolling device and help get to the cherished eggs.

Bad Piggies’ gameplay is a mirror copy of Angry Birds project. If you had to destroy the fortifications of pigs, invaders and recover the stolen eggs, then everything is exactly the opposite. You will be designing. Before the start, you receive a drawing of that transport, or just an object to obtain from the blocks at hand. Then you need to design the finished boxes so that you get the desired design. If you fail, you will have to start over.

From simple to complex

The first stages of Bad Piggies greet you with the simplest puzzles there are. From planks and wheels, you make flimsy vehicles that hardly stick together. The number of attempts per level is not limited, which allows you to feel the entire flight of your imagination. Later stages offer you many parts from which you need to make either a transport, an aircraft, or even a large robot. The most interesting thing is that you are not obliged to use all the details allocated to you for the level. However, the developers thought about the possibility of such extraordinary solutions, so you always have to think carefully.

To complete the stage with excellent marks, you need not only to reach the finish line, but also to fulfill several conditions. For example, the levels may contain boxes with stars to collect. In addition, Bad Piggies can limit you in time, giving you only 5-10 seconds to complete the stage. Well, the most important condition may be the integrity of the cherished egg. Don’t worry, each stage has its own set of conditions for passing three stars. An important condition is that you can earn stars in several approaches. 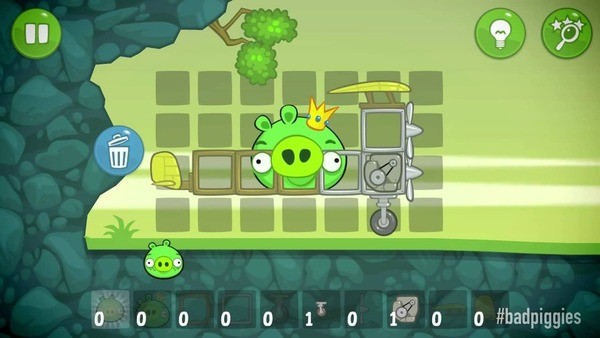 There is not only a story campaign in Bad Piggies, but also various challenges. This mode requires an understanding of most of the game’s mechanics, so it may seem rather difficult for beginners. The game also invites you to take part in festive events where you can earn rewards. Now here you can find, for example, a cupcake race, where you will be the pilot of a helicopter parody.

The release of Bad Piggies is great news for all Angry Birds fans who have won the hearts of millions of users around the world. Although the developers completely changed the gameplay, they were able to preserve the graphics and the atmosphere itself. Everything has the same bright style with a lot of animation and appropriate soundtrack.

We suggest you download Bad Piggies mod, which gives you unlimited money and power-ups. In addition, you will get access to all levels and sandboxes. Play without any restrictions!

In order to build a vehicle, you need parts that you can obtain by collecting various boxes on the levels. Any device has options for assembly. Your car can be on tracks, wheels or fly with a propeller. Thus, you can create in the game flying, crawling, and rotating in addition to the chariot transport. 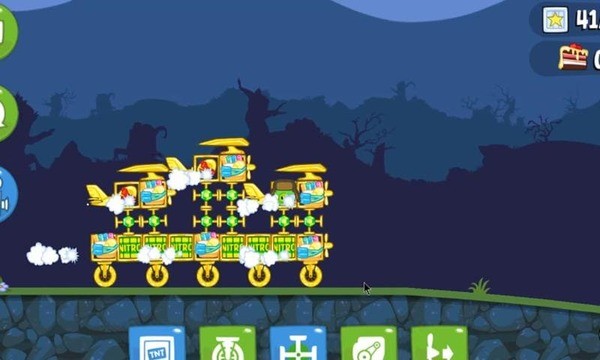 That very Ross will be your pilot. Minion Pig is not a playable character. In addition, you cannot place it in transport, but on the surface. In some scenarios, this will be the right decision if there is a slope at the level and Ross himself will roll to the finish line.

To pass difficult enough levels, developers introduced various bonuses, for example, PowerUps. At some levels you will be helped by the Pig Mechanic, the same ordinary minion, but with a wrench, and even difficult. The mechanic helps you build the perfect vehicle, thanks to which you can complete the level without unnecessary movements.

Everyone knows that any game based on the Angry Birds franchise has every chance of success. However, this does not relax the developers at all, and every time they are more confidently managing to please the fans. If you are a fan of the series and have a love for cute green pigs, then be sure to download Bad Piggies.