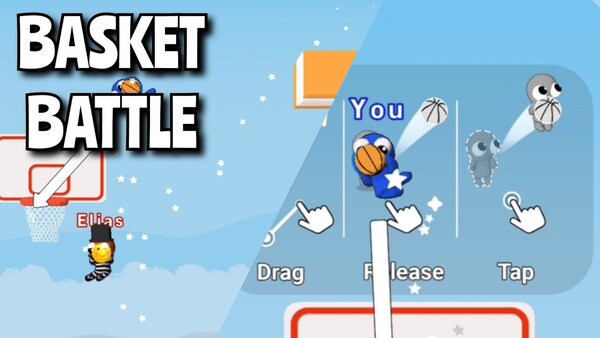 Basket Battle is an entertaining project in which the user needs to take the ball from his opponent and throw it into the basket. The game itself takes place in a 1v1 format, as your task is to seize the initiative. Get the ball, make as many accurate hits as possible and win on points. Controlling the character is very simple, as there are buttons for moving to the sides on the left and buttons responsible for the jump on the right side. Win tournaments to get money and buy new players with different characteristics for your team. In addition to playing against a virtual opponent, developers must add a match with a friend on the same device. If you are into arcades, then download also Jackal Retro and Runner Coaster.

We recommend reading our review for a more detailed acquaintance with the application. 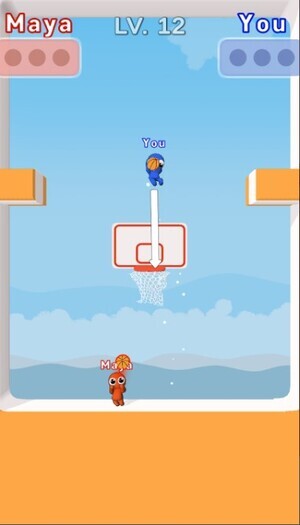 Throw more balls than your opponent

Basket Battle is a very exciting and interesting game in which you have to become a basketball player, and rather small in stature – a kind of stickman. Your goal is to fight against another player on the basketball court. There is no need to play as a team. Just you and one other player. Try to take the ball away and throw it into the opponent’s basket.

Choose one of the available characters and take part in basketball matches in cool arenas. You need to move around the court from one part to another. Deceive your opponent, make accurate throws and earn points. In addition, you need to defend your own ring, jump and prevent your opponent from throwing balls into the basket.

The advantage of Basket Battle is a very simple and convenient control system. There is a button on the left side of the screen for moving the player around the playing field. In addition, there is a button on the right side for jumping. If you press the right button and hold it, you can easily make a throw into the ring. Thanks to this control, you can literally play with one hand, which is another indisputable plus of the project. 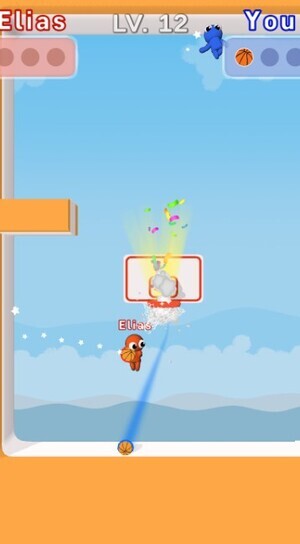 During the next match, you need to monitor the status of your player (bar at the top of the screen). You cannot load him heavily, constantly accelerate and jump a lot, otherwise he will get tired and there will simply be no strength left for the final maneuver.

You can change characters during the match, without forgetting about the set of their unique abilities and skills. Each user has the opportunity to win, but do not forget that excessive arrogance has not benefited anyone yet. Therefore, do not neglect pumping, but it is better to do everything consistently and correctly.

We advise you to download unlimited money mod so that you do not need anything during Basket Battle gameplay.

Basket Battle – exciting sports competitions in which every gamer has a chance to become a professional sports star. You no longer have to envy the rare lucky ones who have reached heights and built a sports career. Role of a coach in a virtual project compensates for the lack of adrenaline and helps to gain self-confidence. 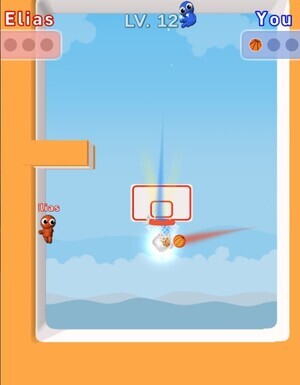 This game takes into account the main principles of gambling entertainment: simple control, dynamic gameplay and many exciting levels that provide a rich and vibrant process of fighting. The project requires you to be prudent and accurate. You need time to guess when to intercept the ball from an opponent and aim accurately at the basket. Players who strive to succeed and are willing to work to improve their skills are sure to become champions.

Basket Battle is a very simple game with clear mechanics. Defeat your opponent on the floor by scoring more balls and thus earning more points.