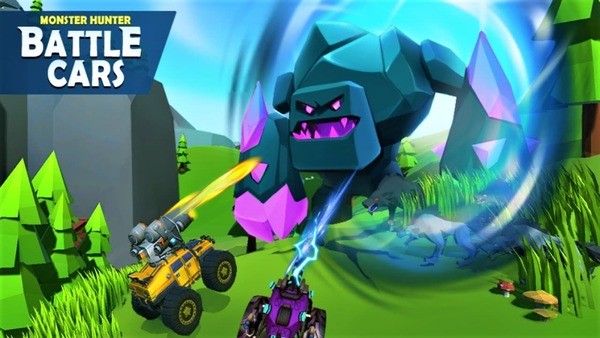 Battle Cars: Monster Hunter is an action game with elements of a racing project from the renowned developer ONESOFT. Find many exciting locations, battles with monsters and bosses. Your main task is to control a combat vehicle by setting its direction of movement. Everything else (driving and shooting) happens automatically. At each level, the hero has several monsters waiting for destruction before they kill you. In addition, the application provides many active and passive skills and improvements for the car (weapons, powerful body and so on). Use the terrain to gain an advantage in unequal 1v8 combat. By the way, you can also fight in multiplayer mode, which will surely appeal to most users. If you are interested in similar applications, then download also MECHA and Dude Theft Wars.

Battle Cars: Monster Hunter begins by asking the user to choose the game difficulty. Moreover, there is no easy level here, as the simplest is the average. There is also a difficult level and a hellish one. At any time during the game, you can change the level at your discretion. The very same gameplay focuses on the battles of main hero and monsters. You have a car with a certain amount of vitality. The car shoos automatically, you only need to direct the car in the right direction. Do it by using the joystick on the screen.

There are several monsters in each level. It is necessary to kill all of them to complete the location. Do not forget that your lives are not endless, so try not to get close to enemies and do not forget to maneuver. However, one shouldn’t be too far away, because the car has a certain radius of destruction. If monsters do not enter this radius, then you will not be able to hit them. The entire campaign mode consists of several stories, divided into dozens of levels.

Many skills and abilities

To make Battle Cars: Monster Hunter more interesting, the developers applied a standard skill improvement system. After some levels, you can choose to learn one of three skills or improve the old one. It can be a multishot, a diagonal shot with several rounds, an increase in vitality, a ricochet and more. The higher the skill level, the more bullets fly out and the more powerful they are.

There are also passive skills. You can purchase them with in-game currency. In this case, the skill will be random, affecting all cars at once. Increase the power of your cars, strength and speed. Form an additional shield around the cars or install a special booster so that the car can jump high.

If there was only one car available in Battle Cars: Monster Hunter, it would be very boring. That is why the project has a variety of cars with different characteristics. Some of these cars are unlocked when the user reaches a certain level. Others are available for in-game currency and still others – only for donation. Each vehicle has a starter set of three skills, as well as vitality, armor and attack indicators.

To make your transport more powerful and maneuverable, you need to install additional parts and body kits on it. Start with weapons, picking up the deadliest. Get cool engines for higher speeds and don’t forget to upgrade the body to increase vehicle protection. Complete all levels and purchase the latest ATV model that will allow you to destroy everyone.

Battle Cars: Monster Hunter is a top-down game. Battles take place in a variety of locations with different landscapes and buildings. During the gameplay, you can listen to driving music, as well as many cool sound effects.

Every time the game prompts players to learn a new skill. There is an opportunity to improve again, but for watching ads. The video lasts more than 30 seconds, which is why many users do not watch it and lose the opportunity to get an additional boost. To make it more convenient for you, we suggest using a mod that allows receiving all bonuses without watching annoying videos.

However, that is not all! As stated earlier, some vehicles in Battle Cars: Monster Hunter are only available for real money. However, you can download a mod, which enables free shopping. Therefore, you do not need to spend anything for numerous improvements.

Battle Cars: Monster Hunter is a survival game where you need to drive an armored car quickly and agilely, shooting monsters along the way. In addition, pumping your car and skills of main hero also plays important role.

Now, the campaign is the main mode of the project. There is also a challenge mode, which is available after completing first 16 chapters of the game. We should also dwell on multiplayer. It is unlocked after the user reaches the second chapter. Now, 1v1, 1vs3, and survival modes are active. Several combat pilots take the start, but there will be only one winner. It is an analogue of the well-known Battle Royale.

Enemies in the game are diverse. Both creeping creatures and very fast opponents are waiting for you. From time to time, users will have to fight a boss who has a lot of vitality and energy. Show all your skills to kill him, earning appropriate reward.

Battle Cars: Monster Hunter is an exciting project that may appeal to players through its campaign and multiplayer. The possibilities for upgrading the car are almost endless and the monsters have completely lost their fear. Only you can put things in order here.