Numerous locations of the Battle Cats Quest are waiting for their feline hero, roll across the field, avoiding obstacles and crash into rivals, pushing them into the water. The last survivor will be the winner of competition with option to advance to the next level. Unlock and use interesting skills based on the capabilities of opponents, their size, weight and speed. Move your finger, setting the direction of the hero, throwing enemies from the arena. Complete missions and get valuable prizes and unique rewards to become even more powerful. Do not give enemies a chance to knock you down behind a circle. Collect funny skins with characters, open each one and enjoy gorgeous 3D graphics and real physics as your cat moves across the battlefield, crashing and knocking out competitors. Become a legend and the king of cats, being the most agile and brave, easily destroying characters who dare to challenge you. Also download Clicker Cats: RPG Idle Heroes and Burger Cats.

Battle Cats Quest is a new game from the renowned developer PONOS Corporation. If you are interested in the details, then read our review.

Throw everyone into the abyss

Main goal of Battle Cats Quest character is to push all opponents from the arena into the abyss. Controls in the game require only one finger. You just need to accelerate well and hit the enemy using simple swipes. It is necessary to observe the amplitude of the oscillations, because it will not be so easy to push the enemies together. Be careful! You can very easily fly out of the location yourself. In this case, you will have to start all over again (or watch an ad to prevent this from happening). After completing the level, you will no longer be able to break down. In general, the application is divided into levels. It is necessary to complete certain tasks in order to achieve success at each of them.

Battle Cats Quest invites you to play as a round cat that rolls around the court dashingly. Oppose you will be the same round creatures, but of very different origins. You will often face several opponents at once. This is the so-called boss and several of his henchmen. Small opponents can only confuse and get confused, but you have to get rid of everyone in order to win. The enemies themselves differ in appearance and behavior. Some of them actively attack you, while others try to confuse, provoke you to fall into the abyss.

Complete tasks and get bonuses

The developers of Battle Cats Quest have introduced some semblance of a role-playing component into the project. Your cat has attack and defense indicators that affect its strength and resilience, respectively. Upon reaching certain goals in the project, you will be able to pump these skills. How it works? For example, you will receive plus 1 to the attack for reaching the fifth level. Unlock two skins and get another plus two to this indicator. Reach level 15 to get protection. You can also fight for cat food needed here to open these very skins. 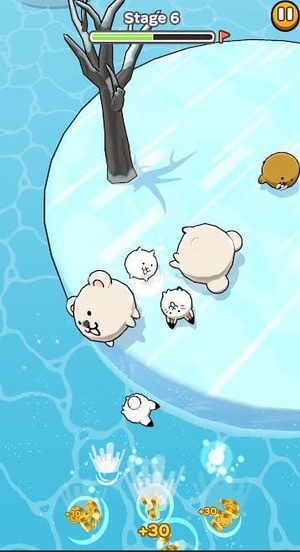 One of the main components, as mentioned above, is the graphics and general drawing of all the characters. If you have previously played projects from this developer, then you will easily recognize their corporate identity.

Battle Cats Quest has a large number of skins that many users will love. However, it will take a very long time and patiently to open them. If you do not want to wait, then download the mod with all the skins already unlocked. You just have to choose the one you like. In addition, we removed all ads from the application.

Battle Cats Quest is a very interesting casual game that will delight fans of cute cats. As part of the gameplay, you have to take control of a team of brave cats and create universal fighters from them in order to crush your enemies. 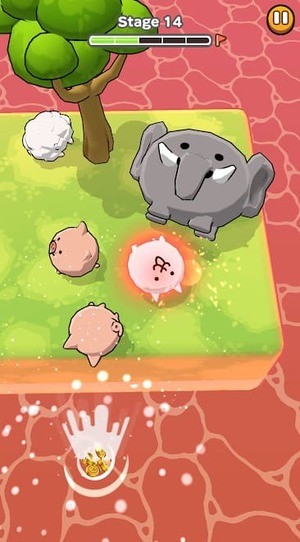 During the battle, the user will practically do nothing. Players only need to pick up speed and push their opponents well in order to push them out of the territory. Each successful completion of the match brings a high reward in the form of various bonuses. The most important in-game currency is gold coins. You can afford to buy skins on them. Move from level to level and get bonuses for your successful performance. Remember that this project requires not only accuracy, but also ingenuity, because it is very easy to fly out of the location. In this case, you will have to start all over again, which is extremely inconvenient and time-consuming.

Battle Cats Quest is a very interesting game with almost no age restrictions. You can spend many hours here with a large number of levels, friendly graphics and simple but addictive gameplay.