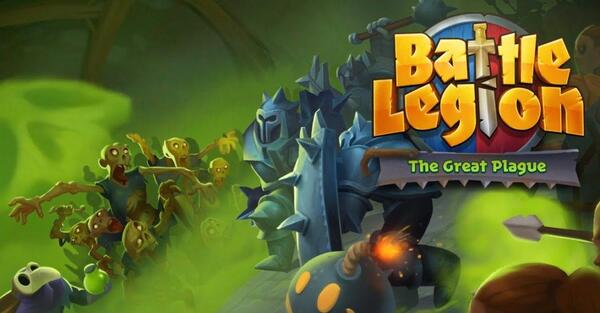 Battle Legion – Mass Battler is a combat game with massive 100v100 battles that take place in automatic mode. The management strategy requires from you to lead a small army of barbarians and lead them to victory. The project departs from the already familiar MMOs and seeks to offer its users a completely different experience of a single player game. Face complex artificial intelligence or take part in RPR arena battles against players. The mechanics of the game are very interesting: you need to form an army for battles with battalions of enemies, choosing a competent position and pumping the functions of heroes to the maximum. With each victory, you receive gold that you can spend on buying additional soldiers or improving those that you already have. If you are interested in the battles of brave units, then download also Northgard and Star Trek Fleet Command.

The application has more than one million downloads and its average rating is 4.6 points.

Battle Legion – Mass Battler has such a name for a reason: unlike many competitors, it uses squads, not single units. Thus, a combat unit here represents several units of the same type at once. At the same time, you can place several identical units on the battlefield – for example, archers, which are good for cover. New squads are unlocked as you progress, and you can choose your own squad for each battle. 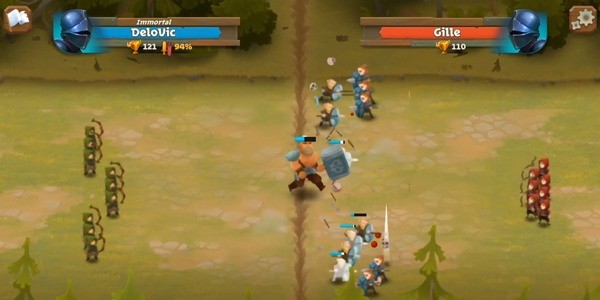 Thanks to this approach, the game differs from the background of many arcades with automatic battles. They use units and here they use squads. This gives the illusion of some kind of tactics, especially since you can line up units on the field using the space available to you. However, you will not have to make many tactical decisions in reality.

Battle Legion – Mass Battler allows you to use the services of an archer, knight or formidable wizard. The main thing here is to defeat powerful enemies, often leaders, by choosing the right tactics for battle. Win, upgrade your rating and face stronger opponents. Therefore, you can increase your army and improve your skill.

Also Battle Legion – Mass Battler features the ability to create different squads, each with its own strengths and weaknesses. Start with the standard swordsmen, who have swords and shields at their disposal. In addition, you can summon great magicians, war machines and even mythical creatures like griffins for help. The main thing is to think over the strategy for the battle correctly, taking into account the units available. After that, you can safely watch what is happening on the screen without interfering with the gameplay.

For those interested in multiplayer, Battle Legion – Mass Battler offers this opportunity. Challenge your friends and play with them or against each other. Fight in duel or group battle mode. Of course, you need powerful units, armor and weapons to be successful. Therefore, it is worth preparing carefully before going into battle. There is a wide selection in the application. Everyone can choose a hero to their liking, but making the right choice is not enough – you need to skillfully defend and attack. The app is quite simple to learn, so soon you will surely be successful in multiplayer and maybe even atop the leaderboard. 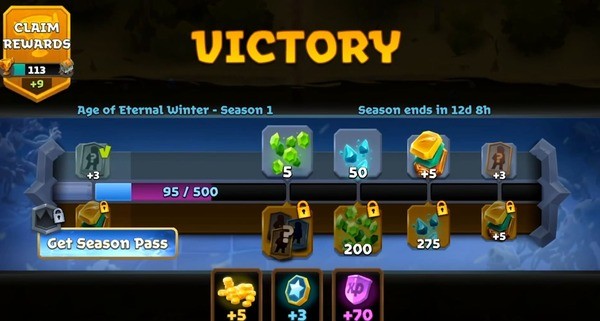 Winning battles is not easy, because there is always a lack of damage or defense. To solve this problem, we suggest using a mod with a special menu, in which you can increase these indicators to an acceptable level for you.

After starting Battle Legion – Mass Battler, you need to open a special mod menu. There you will see two indicators – damage and defense. Enter the level you are comfortable with and enjoy the unlocked gameplay.

Initially, you have to go through nine training battles. Whatever you do there, everything will go according to the script of the developers. Nothing depends in the main game on you except for the formation of the roster. Therefore, in most battles with bots at the training stage, you win anyway, but you lose one. Just learn how to strengthen the units and there will be no more defeats! At least until the main game starts. 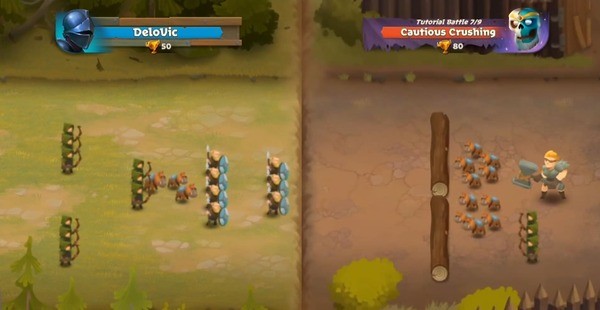 At the beginning of the adventure, you have infantry and a couple of squads of archers on the field. The infantry goes forward and attacks closely and the archers cover the opponent from afar. This tactic is obvious, because soon you will find other units to diversify the gameplay of Battle Legion – Mass Battler. To open units, you need to find their fragments. They appear from chests given for the accumulation of experience. The system is not obvious. However, in reality everything is simple: you play – you get chests – you open them – you find fragments.

Having fragments, you can hire one or another type of squad for coins. In addition, you can spend fragments on upgrading existing units, which is more reasonable, because the battlefield is not rubber. You can have at least a thousand archers, but you can put, for example, no more than four units. The number of available slots for units depends on your level. In addition, the game has an interesting system for launching matches – you have to swipe up or down. The roulette will scroll and a battlefield will appear in front of your army, where rivals have already lined up!

Battle Legion – Mass Battler is without a doubt a mobile game that you should try to play, as it is a breath of fresh air for all strategy and battle simulator lovers.