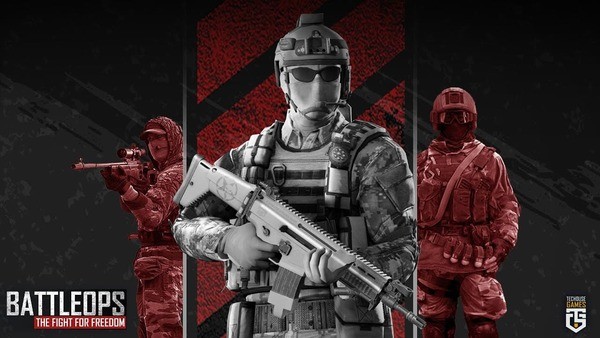 BattleOps is a first-person shooter with several game modes, a rich selection of weapons and interesting missions. Take on the role of commando who deals with various kinds of militants and other bad guys. The missions here are not entirely diverse: you need to go from one point to another, stopping for a shootout with waves of opponents. It can be both conventional armed groups and a helicopter, which you can destroy from a machine gun. The project does not have multiplayer and other online elements, so you can play where you want. In addition, the developers have introduced sniper missions in the latest updates. If you are interested in shooters, then also download Truck Driver City Crush and Deer Hunting 2: Hunting Season.

BattleOps is a shareware project with in-app purchases. If you are interested in more, then download and see its quality yourself.

Now, the project has several modes, including single and team battle. Fans of shooters do not even need to explain the rules of each of the modes. Four huge maps are waiting for you. Find there shelters, sniper positions and even vehicles. Here you have to choose character classes, which adds some RPG elements to the gameplay. Each class has a number of unique abilities, each of which will bring you closer to victory. In addition, there is everyone’s favorite zombie mode in the game!

Unfortunately, the project does not have a full-fledged multiplayer, but you can fight other players in offline mode. PVP modes include Frontline, Deathmatch and more.

In addition to different modes, there is also a variety of pumping. You can pick up your ammunition from several types of weapons. Get several sets by collecting them in slots. You can change kits even in battle at the respawn point. In addition, upgrade weapons with modules. Earn them for completing tasks and leveling up. Different modules add different new properties to your weapon.

In addition, each fighter can have own skill, that you can charge during the battle. For example, you can take a flamethrower and start burning your opponents with it, having scored the required number of points and filling the scale. When the ammo runs out, the weapon disappears, but later loads again.

In addition to ammunition, fighters can also change cosmetic elements. Visit a separate tab in the game store, where you can pick up a bandana, body armor, pants and gloves for your soldier. These elements do not affect the characteristics in any way, but make it unique and recognizable on the battlefield.

The issue of weapons in BattleOps deserves special attention. There are a lot of them here. We are talking about a hundred names. Improve, modify, disassemble and twist almost every weapon. Enjoy hundreds of modules to choose from, which can surely find their place on your guns. These can be sights, laser pointers, grenade launchers, handles, extended magazines and other delights of military affairs.

The visual component of BattleOps has three-dimensional shell that can please players with high-quality picture and abundance of rich colors. Graphics will delight users every time they launch the game.

BattleOps is a free project, but you can achieve great success in the game by downloading a mod for unlimited money.

BattleOps developers offer everyone to become a Special Forces soldier and go on dangerous missions. Shootouts in hot spots, high-quality graphics, various missions and hundreds of enemies are waiting for you.

You have to start with the campaign mode, which in turn consists of chapters, which also have levels. Each time you have a specific task related to the destruction of marked targets, protecting the perimeter or finding valuable items. Once at the location, you need to move around the building or street, using all kinds of shelters in form of boxes, columns and other barriers. Enemies will be waiting for you literally on every corner, so try to aim accurately at the head and pull the trigger in time. To move, you can use a multi-position joystick. Swipe allows you to aim. Set of buttons on the right side of the screen is responsible for shooting, throwing grenades and other actions.

The offline multiplayer mode divides players into two teams and offers to take part in a match where you need to score more points than the opponent’s team. The choice of firearms is quite large, in addition to pistols, you will find assault rifles, shot guns, machine guns and even grenade launchers. Between battles, you can go to the workshop to improve performance of the main weapon, buy grenade or new body armor. Do not forget about a couple of first-aid kits.

If you like dynamic games and various shooters, then BattleOps is exactly what you need.