Be The Judge is an intellectual game from the Matchingham Games studio. You have to take on the role of a judge and decide the fate of other people. The essence of the game is as follows: each level features a certain situation with an offense. First, you need to find out what was the reason for the crime and then make a sentence. As a rule, there are three options for solving the problem. When you make your choice, you will find out how other people voted as a percentage. If your opinion coincides with the results of the majority, then you will get more points. Investigate the crime, figure out who is right and who is wrong, and make the right decision. If you do not know what to do, use the hint. Download also Case Hunter and DOP: Draw One Part.

For all the details about the game, read our review carefully.

Developers presented more than a hundred levels in Be the Judge a completely random life situation in each of them. The essence is always the same – one person, for some reason known only to him, commits a crime. You need to figure out why he did this. To do this, you will see a small video where the offense takes place. Then, armed with a magnifying glass, you need to examine the entire location carefully in search of a clue. 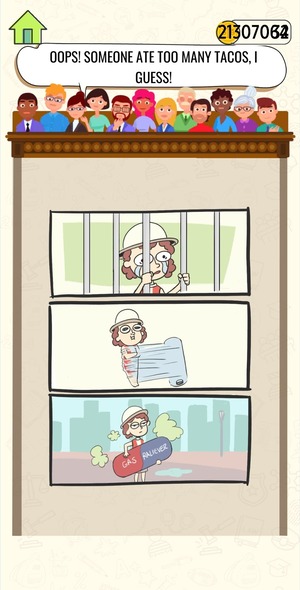 For example, a girl in a restaurant was extremely unhappy with an order and splashed soup in the face of a waiter. It would seem like a typical hooliganism, but it turns out that she had a cockroach in the dish. What to do in such a situation is up to you, but the girl’s motives become clear. Another situation, a man stands next to a flight attendant at the airport. Suddenly, she pushes him into the blades of the plane, which causes him to die. Brutal murder? However, having examined the location more closely, you can see the bag of this person with a bomb. Such contradictory situations happen all the time. To go to court, you need to establish the cause of the crime, or at least its motive.

Get a fair verdict

It will be time to make a decision after clarifying the circumstances of the criminal case. Be the Judge has a jury, but you decide everything for it. Often there are three options for the development of events: harsh (imprisonment), neutral and acquittal for the suspect. It also happens that he gets monetary compensation or the defendant sent to correctional labor. When you make your choice, you will see the results of other respondents. If your choice matches the majority, get more coins. If not, then less. In general, the options for the defendants are always different, so with each level the task may become more complicated.

If you are at a dead end, then the developers of Be the Judge have provided a system of hints that can help you in any given situation. Let us say the user cannot find evidence and understand why the main character of the episode went to the crime. In this case, you can take a hint, and then the magnifying glass will aim at the right place by itself. You just have to make a decision about the future of the defendant. If you absolutely do not like the level, then you can just skip it. Any clue is worth gold coins. Obtain them for the correct choice, as well as in the roulette wheel, which is available once every few minutes.

Be The Judge has high quality beautiful modern graphics, intuitive and incredibly convenient controls that help even beginners not to get confused by the interface. The developers have specially added beautiful and understandable game mechanics that help you quickly cope with all the difficulties that arise. So that you are not bored, pleasant music sounds during the gameplay.

To receive hints, players need gold coins, which are extremely difficult to earn. So that you don’t have any problems with this, we suggest downloading our mod unlimited amount of money. In addition, we removed all ads from the application.

Be The Judge requires to bring the ability to think outside the box to the maximum level. It takes a long time to break your brains, trying to achieve the right result. Constantly help different characters, trying to find even small and insignificant details that can bring everything together. Try not to overlook all the details, because even small particles sometimes turn out to be decisive. Get creative, take your logical thinking to the next level and just have a good time. Be sure to have a lot of fun while you learn the gameplay.

Each level in Be The Judge differs in goals and mechanics used. You will constantly find differences between them, trying to achieve impressive results. Do not forget to look for the main evidence, because this is the main condition for passing. It is quite a fascinating and interesting process, so it a lot of fun awaits you. Riddles differ in complexity, so it will be interesting to watch the actions, because the brain will not always be ready to increase the complexity. Sometimes it seems that the accused has no excuses, but later he may not be such a bad person.

Playing Be the Judge is very fun and interesting, you will not notice how you spend several hours here. During the gameplay study, it is possible to get to know many characters better, live a fascinating story, learn to think outside the box and pump your logical abilities. Don’t worry about making a mistake, just start over. This exciting process will keep you engaged for a long time. If something does not work out for you, then just use the tips specially added for this.

Be The Judge is a popular project with a fascinating storyline. You will observe different life scenes and then arrest the violators and pass a sentence on them.