Beggar Life is a funny clicker where you need to beg, collect partners in a team of beggars and buy entire planets. You will not envy the main character, but we must give him his due, because he firmly decided to get rid of his disadvantageous position in society at any cost. Your difficult path in the game starts from the bottom. During the first launch, your character has an unsightly appearance and torn clothes, as he has to beg for money from passers-by. However, as soon as you collect the first funds, a world of different perspectives and opportunities open before you.

Spend the money received in yourself and your appearance or take the first steps of investment in order to earn much more tangible amounts of money in the future. With sufficient capital, our character will be able to acquire real estate, various exhibits, art objects, companies and even entire cities. Beggar Life is a very original clicker with a curious approach, where you decide what to do with money you received by collecting alms. We also recommend downloading Champions of Avan and Zen Idle: Gravity Meditation.

The project has many fans all over the world, and for good reason. Now we will tell you everything.

Beggar Life is a classic clicker, but with an original performance. You begin your adventure by sitting alone against a wall. You have no money at all and all that remains is to beg on the street. Tap the screen and earn your first money. Tap as often as possible to earn money. Level up your character and increase income per click. Over time, you will receive money not only for tapping on the screen, but also every second. The higher the level of the hero, the greater the profit. Now, the project provides for about a thousand levels for the character. 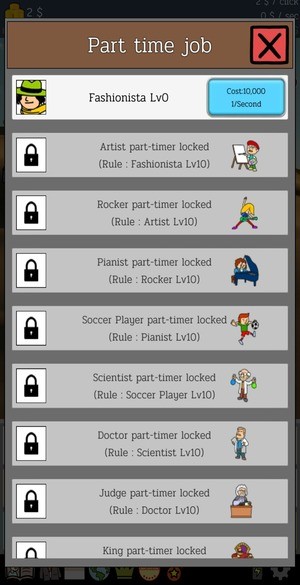 Begging alone is boring and not so effective, so the main character of Beggar Life must gather a whole team of like-minded people and put on a real show on the street. Invite an artist, soccer player, scientist, doctor, judge, or even a king and aliens to beg for alms! You will not be able to involve all of them at once. For example, to call a football player, you need to pump up to the tenth level of the previous companion – a pianist. Pumping costs money, but believe us, it will pay off in the very near future.

Buy your first home to avoid being homeless

After assembling the team, it is time to think about a roof over your head. For this, the developers have implemented several structures in Beggar Life that the player can buy. Each house costs a lot of money, so you have to save long enough for your first home. Start with a one-room apartment and subsequently purchase five, ten, or even fifty-story houses. By the way, your property will bring constant profit, and you can sell it at any time by increasing your budget. Therefore, you will have ab opportunity to stop wandering, but first it is necessary to ask for alms properly. 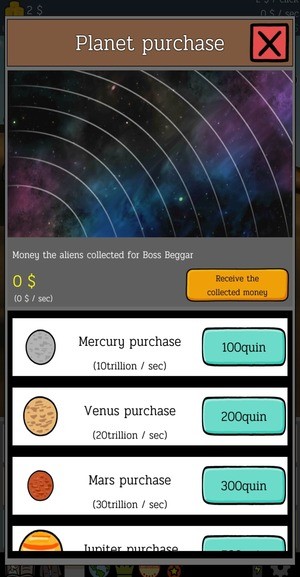 Buy companies, cities and even planets

When your character gets rich, the moment comes to develop your business empire. No, you will not have to give up begging, since it will bring fabulous money. However, players will be able to get possession of various companies known around the world. For example BMW, Mercedes, Netflix or Toyota. There is also an opportunity to purchase art objects – paintings by famous artists for a lot of money and even entire cities. Where else could you become the master of Paris, London, Sydney or Seoul? It is possible in Beggar Life. If this is not enough for the player, then buy a whole planet at once, for example Mars! The cost of the planets is estimated in trillions, but for a real beggar this should not be an obstacle.

The application features two-dimensional graphics and it has a unique style and drawing that stands out sharply from the background of other projects. Also worth noting is amusing soundtrack, which is quite consistent with the spirit of the game.

To increase the price of income per click on the screen or income per second, Beggar Life uses special elixirs. It is easy to guess that such potions are quite rare during the game, so upgrading will be extremely slow without them. In order to become the ruler of this world faster, having billions of dollars, we suggest you download a mod for unlimited number of elixirs.

Beggar Life allows you to become a billionaire by earning fortune from begging. To make the game even more interesting, the application has a system of achievements and bonuses. When you complete a certain task, you get money and potions. There are about a hundred such tasks in the application. The application also provides for a change of places and there is an opportunity to buy clothes for your hero and have a pet. 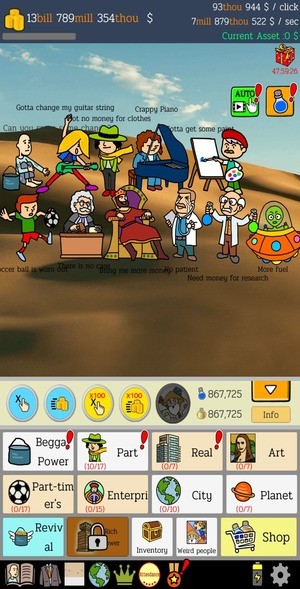 By the way, each of your craft companions has own unique history that you can learn after this person reaches a certain level. In this case, you will see a story in the form of comics, which will tell you why he began to earn his living in this way. In addition, each of the beggars has own unique passive bonus that will be unlocked at a certain level.

Start your career as a beggar all alone, sitting against a bare wall. Recruit a funny team and earn much more. Buy real estate, works of art, the world’s leading companies, cities and even entire planets! In the end, compete with the richest people, going all the way from poverty to luxury.

Beggar Life is a slightly non-standard clicker, where every player has almost unlimited possibilities. The application is suitable for both children and adults, so we recommend you to familiarize yourself with it.