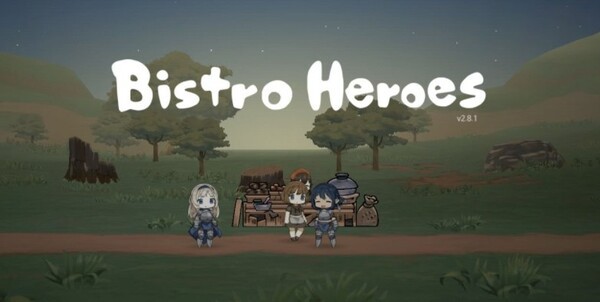 Bistro Heroes is an addicting role-playing game from the developers of Team Tapas. Become the head of a squad of warlike girls, cleanse the world of monsters and develop your own restaurant. A fascinating crafting process, an interesting combat system and a pretty setting will clearly delight any connoisseur of the genre. You need to not only fight and trade, but also develop your heroes and the institution itself. If you are an RPG fan, then we can also offer you My Hero Academia: The Strongest Hero and Call Me Emperor: Alternate World.

More than a million downloads worldwide can already confirm the quality of the proposed project. Considering the previous development of the Team Tapas studio, there is no doubt about the fun of this game. Let’s see why Bistro Heroes are so attractive.

The gameplay begins with a short tutorial, during which the game explains that fighting is straightforward. The heroes fight on their own, and all the player has to do is observe and use special abilities that simplify the battle. In addition, when strong opponents appear, you can also focus the attention of the heroes on them for the fastest possible destruction. Use the above abilities after a certain time, as they need a few seconds to recover. In the later stages of the game, we recommend using them wisely and choosing specific skills for different types of monsters.

The plot of Bistro Heroes tells about two female warriors who wander through unknown lands in search of food and water. Almost on the brink of death, they find a kind of oasis – a small restaurant, which owner of actually saves their lives. However, as always happens in such stories, owner of the cafe immediately notices the vein of entrepreneurship in the girls and gives management furrows into their hands. From this moment, the active phase of the game begins. You will have to expand your influence on neighboring lands, help passers-by and rid the world of universal evil.

Despite the fact that from the very beginning of Bistro Heroes two heroes will be immediately available to you, over time you will be able to get hold of a dozen more warriors. Moreover, depending on the income of your bistro, you will be able to develop not only the general characteristics of the heroes, but also individual skills. Each protagonist has his own ability, be it massive arrow fire or temporary invulnerability. In addition, you can also improve general stats, allowing you to improve the number of health and heroes, attack damage, defense level and much more. One way or another, all improvements cost gold coins and gems and you can earn them by completing tasks and improving the restaurant.

Dozens of ways to grow your cafe

After completing the very first task, you can get access to the recipe book and the bistro improvements tab. The point of any improvement or new recipe in Bistro Heroes comes down to making more profit. Complex meat dishes cost more, while two ovens cook faster than one and so on. Unfortunately, you won’t be able to improve everything right away, since pumping a bistro is closely related to pumping heroes. Therefore, you need to upgrade heroes, complete tasks, add new recipes and accessories and earn money in order to improve the warriors again. Vicious circle. 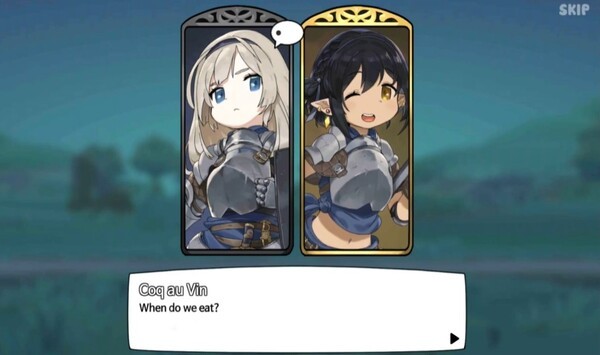 In fact, quests are the starting point for any improvement. At the same time, they can vary in their significance and order of action. First, you need to kill several monsters and conquer nearby territories, and then you need to feed 20 people and collect 15 stars from the sky. In fact, you will not be bored, especially since you can replay the already completed quests many times for additional profit. It is very convenient, especially when your heroes do not have enough fighting skills to defeat a strong monster. You can always return to the levels you have already passed and earn more coins there to improve your warriors.

Bistro Heroes features in the traditional JRPG style, which includes hand-drawn characters and unusual animation. In fact, all events in the game take place from a side view and there are no 3D elements here. Light and unobtrusive music plays in the main menu, which only helps to tune in the desired mood. During fights with monsters, the melody changes to a more belligerent one. Therefore, players can easily adjust to the rhythm they want.

To simplify the process of passing Bistro Heroes, we suggest you download a mod with a special built-in menu. Use it to upgrade your bistro and main characters in a matter of minutes. Moreover, pumping ability itself disappears in some cases. The menu includes the ability to enhance the attack of the main characters from 1 to 1000, as well as accelerate the attack speed from 1 to 10. There is also a god mode function, after which your warriors will not take damage from monsters. In addition, resources, as gold coins, stars and wood will be available in unlimited quantities. Turned on or off all functions of the mod menu at any time during the game.

We cannot call playing Bistro Heroes difficult, especially since at first training in all the main areas awaits you. Once familiar with the combat system and key aspects of management, players can begin to operate the bistro. Complete main and side quests, while improving the skills of the main characters and accessories in the bistro.

Do not forget to take part in the so-called events during which you need to complete the simplest tasks to receive bonuses. For example, you may be required to collect about 20 stars that have fallen from the sky in order to receive several bonuses in the form of gems.

Bistro Heroes is a shining representative of light RPGs, which are more like clickers in their component. The game focuses on point management, and not on combat or pumping heroes. In general, even if you have problems passing some stage of the game, you can always use the built-in menu functionality. Its functions will help you with any problems with ease.