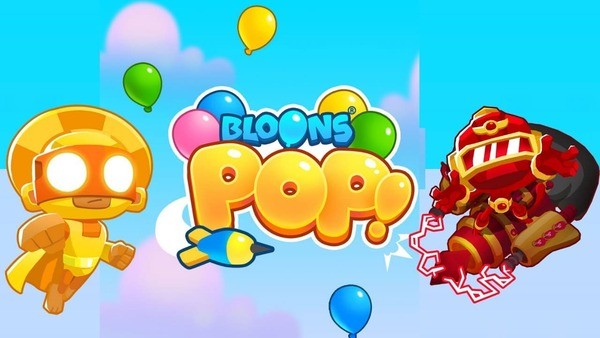 Bloons Pop! is an addicting strategy where players have to blow up balloons using a variety of weapons and fighting monkeys. It is also necessary for the player to rebuild the city of monkeys in a timely manner in order to make it prosperous again. Colored balls are very beautiful, but also insanely dangerous. Try to destroy them all before the level of the balls reaches the critical level, otherwise you will lose. Use a variety of weapons and monkeys and enlist the support of brave heroes who are capable of destroying whole rows of objects with help of superpowers. Over 120 animated objects and eight huge worlds to rebuild are waiting for you. This project is suitable for both children and adults, as it can give everyone many positive emotions. We also recommend downloading The Ants: Underground Kingdom and Trench Warfare 1917.

Bloons Pop! has over a hundred thousand downloads in a week. Game’s score is a decent 4.2 points, which speaks of great future of the project.

Thousands of levels with colored balls

The main enemy in Bloons Pop! are balloons. They exist of several types and differ in color with properties. The simplest are red balls, they are the easiest to destroy, but do not relax, because there are dozens of varieties of these balls. The more expensive the ball is, the more difficult it is to burst. At each level, you need to shoot all the balls before they reach the top of the screen. If you do not have time to do this, you will lose.

In addition, each location requires a certain number of shots to destroy enemies. The shot direction can be set using the arrows. If you suddenly saw that at least one ball is in close proximity to your hero, then first it is worth shooting at him. It is also important to take into account the fact that the balls will be gradually improved and modernized. Sometimes armored ones appear, making it difficult to stop them just like that. There are also balls with spikes and exploding parts. All this is important to consider when defending your structures.

Passing the levels brings the main character of Bloons Pop! money. Use them to rebuild the monkey town hall. Build a figured facade, put a brick roof and put a flag on the building. Decorate the area with fruit trees and fountain. In total, 15 improvements are available at the first location. However, do not think that this is all. When the town hall is finished, you can go to another location. The city market, banana farm, park path and much more are available to players. In total, it is necessary to revive eight districts of the once beautiful monkey city. All objects that you build are beautiful and create a unique atmosphere of a cozy city.

Use different weapons and heroes

Every monkey in Bloons Pop! has a number of its unique features and uses various techniques to destroy the enemy. Upgrade each individual hero in his own way, making him a unique character. As in other similar games, developers added monkeys, alchemists, archers, melee masters, druids, simple magicians and more. It is possible to upgrade one of primates to the level of legendary hero. Players will be able to choose his specialty and pump the skills of a super character.

Use available heroes as you progress through the levels. First, there is only Quincy – he releases volleys of powerful arrows. Then Gwendoline appears, conducting ranged attacks in different directions. Obin the Greenlegs appears at 12th level, unleashing Hellhounds at the balls. Over time, you will be able to unlock many characters and combine them at your discretion.

Bloons Pop! features several dozen locations that are constantly changing. The picture has a pleasant visual component, and tips from assistants will accompany each step at the beginning of the game. Each weapon has its own unique sound, so we can say that the developers have worked hard on their project.

Game currency is required to develop the city in Bloons Pop! and there two types of game money. You can save it for a long time in battles and receive it in chests, or you can simply download the mod for unlimited amount of money to make your pastime in the project much more pleasant.

At every level of Bloons Pop! main hero has a certain number of moves, as well as different monkeys and weapons to use in turn. It is also possible to launch a huge bomb into a cluster of balls, which will destroy a hundred enemies at once. Already at the initial levels, you have to destroy 800 balls, while there are about thirty moves for this. However, not everything is as difficult as it seems, because your bullets, darts, arrows and bombs ricochet. Due to this, they inflict maximum damage to the balls.

Don’t forget about boosters to use during battles. For example, the Maelstrom releases a strong vortex of sharpened, spinning blades. A thunderstorm shoots an electric arc between two balls, while a phoenix summons a huge firebird. A ballistic missile fires a burst of homing missiles.

As for the monkeys, they are divided into ordinary and mega-monkeys. All their types become unlocked during the gameplay. Mega-monkeys are more dangerous, because they can hit balls with acid, ice, darts, boomerangs, fire, water, and more. However, ordinary animals can also be very useful, since there are snipers, ninjas, bombers among them. Opportunities can amaze. Use your troops correctly, shoot accurately and do not forget to improve the local city.

Downloading Bloons Pop! means becoming a part of the world of monkeys, which is facing a new disaster. You have to constantly fight, swing the heroes and learn new skills in order, in the end, to win.

How to Install Bloons Pop Mod?