Bloons TD Battles 2 is a strategy from the developers of ninja kiwi in which you need to defend towers from enemies. Fight in duels with your opponent in the one who can outwit the opponent earlier and will win these battles. To do this, you need to put the most effective number of tower structures and try to crush your opponent’s defenses. Everything comes down to the correct use of skills. Try different tactics to inflict a crushing defeat on the enemy. There are about ten arenas that differ from each other, more than 2 dozen towers and numerous options for improving them, which guarantees the possibility of creating a unique configuration. In addition, the game has a selection of skins, a variety of animations and expressions of emotion to stand out from the rest of the players. Win countless battles to find yourself in the hall of honor and compete for the leading position in the overall rating list. Also, download Isle Builder: Click To Survive. 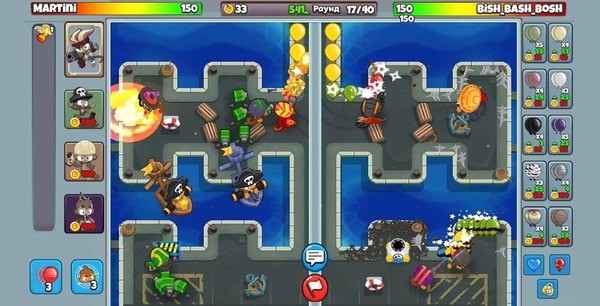 Bloons TD Battles 2 is an addictive strategy game in which the player will become the defender of the monkey city. Fight and blow up enemy balloons. Are you interested in this kind of gameplay? Read our review.

Think over your strategy

The main enemy in Bloons TD Battles 2 is balloons. They exist of several types and differ in color and properties. The simplest are red balls, they are the easiest to destroy, but do not relax, because there are dozens of varieties of these balls. The more expensive the ball is, the more difficult it is to burst. You have to buy balls in order to harm your opponent. They appear on the enemy field and can turn the tide of the game. Each of the opponents has a health bar. It decreases if the ball goes all its way from start to finish. It is also worth noting that different balls fly at different speeds. As you can imagine, this kind of gameplay will require ingenuity and strategic thinking from users, so make the right decision.

On your field in Bloons TD Battles 2, you need to place units that will destroy the balls. Do it wisely, because the balls come from different directions, and your task is to keep your health. Improve all of your subordinates in various ways. For example, in the simplest monkeys, improvement occurs in two parameters: firing range and attack power. Before the start of the battle, you must choose which means of protection you will use, so choose them randomly.

Each monkey has a number of its unique characteristics and uses different techniques to destroy the enemy. Pump each individual hero in his own way, making him a unique character in the game. As in other similar toys, monkeys, alchemists, archers, melee masters, druids, simple magicians, etc. are available here. Despite the fact that the player will place monkeys, it will be possible to build towers. However, brave monkeys will mainly lead the load and battles. Over time, one of the primates can become a legendary hero. The gamer himself will be able to choose his specialty and pump the skills of the super character. 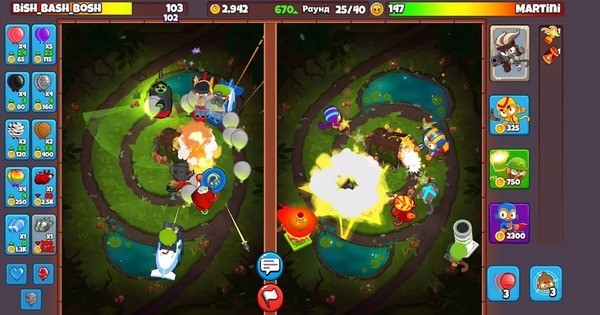 All battles in Bloons TD Battles 2 take place online. In a quick game for “medals you make a contribution to enter one of the arenas. The steeper the arena, the more expensive the entry, but accordingly, the winnings will be greater. If you lose, then they take away your currency. If you win, they give away your medals and the medals of your opponent. The battle itself takes place in rounds, which, in principle, can last indefinitely, but it is unlikely that anyone has succeeded. Each round, balls move towards you, and the enemy can add even more of them for money! The number and class of balls grows with the number of rounds. The task becomes more difficult and it becomes more and more interesting to play.

There are tournaments in the game, winning in which is very useful. The possibility of playing with friends is very convenient. You can very quickly get together and play a couple of games.

We suggest you download Bloons TD Battles 2 mod, which will give you a large number of medals.

This strategy has a PvP mode in which you will fight other gamers. If you have played past versions of this lineup, there is no need to explain anything. Defend a monkey base with an intricate road that leads to it. Balls of various destructive forces move along it. Upon reaching the base, they inflict varying degrees of damage to it. It is also important to take into account the fact that the balls will be gradually improved and modernized. Sometimes armored ones will appear. It will be difficult to stop just like that. There are also balls with spikes and exploding parts. All this is important to consider when defending a fortress. 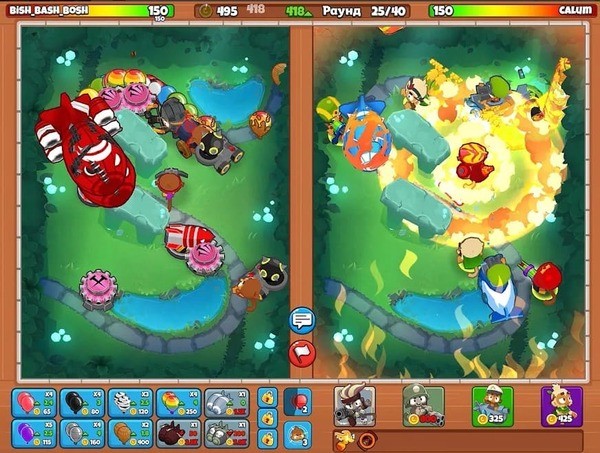 The main task is to protect the city from the balls rolling on it. For its implementation, it is necessary to think over each action. If you like games where you need to use logic and imaginative thinking, then look at this app. Unlike other versions of this franchise, Bloons TD Battles 2 does not offer the option of teaming up with other players in an alliance. Each player conducts all actions independently. The developers managed to create a world full of surprises and surprises.

Bloons TD Battles 2 is a rather addictive online strategy that will appeal not only to fans of the series, but also to all fans of active PvP games. Here you need to defend your fortress, simultaneously strengthening the attack on the enemy city.