Bob’s World – Super Adventure is a dynamic platformer in which you have to run across locations and perform jumps and stunts, collecting bonuses and coins. Help the main character Bob, who intends to save the princess. Immerse yourself in a fascinating world and avoid traps, because your adventure begins right now! The game interface and controls are very similar to the Super Mario. You won’t encounter too many enemies in the first levels of this platforming game. Nevertheless, they gradually become more difficult level by level. As the levels get more difficult, you have to use your skills and overcome each of the obstacles as quickly as you can if you want to win as there is a time limit and you have to complete the stage before the timer runs out. With convenient controls and well-designed graphics, this game will give you hours of entertainment! Download also Geometry Dash World and SpongeBob SquarePants: Battle for Bikini Bottom.

During its existence, Bob’s World has managed to interest more than hundreds of millions of gamers. Almost five hundred thousand user reviews pleased the project with a high rating, which currently stands at 4.3 points.

Bob’s World – Super Adventure will surprise you with its dynamism and variety. Although the main character can only run and jump, variety of levels and amazing work of designers will give you a sense of gameplay depth. As mentioned above, the main mode here is the story campaign. It forces Bob to travel to different worlds. During the campaign, you can collect coins and various rewards. 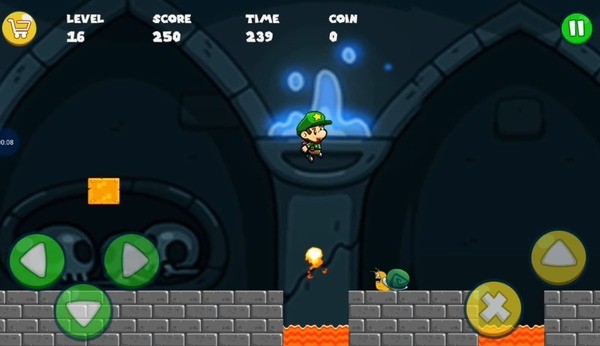 There is a certain amount of time to complete the level. If the timer shows zero, then will have to start the stage from the very beginning. Unfortunately, the levels here are not as long as we would like, so each of them offers about two minutes or even for completion. Knock out enemies and dodge various traps. Please note that you have to go through it several times to collect all the coins on the level.

As for the game itself, you will find a standard side view in Bob’s World. The locations are as similar as possible to the classic ones. Your opponents are mushroom men, turtles, carnivorous plants and the main boss – a huge dinosaur. To destroy enemies, it is enough to jump on them. You can also eat a mushroom that gives invulnerability and just run through a crowd of opponents. In addition, you may come across various traps and dangerous mechanisms. Use special cubes, stepping on which, you can slow down or, on the contrary, jump on certain parts of the map to collect bonus coins.

The controls in Bob’s World are as simple as possible so that everyone, regardless of skill level, can play. That is why the developers focus on the fact that the game is suitable for users of all ages. It is enough to press a certain button for a character to make a jump or a certain trick. There will be magic boxes in locations. Some of them can drop various amplifiers, like mushrooms, while others give strength or slow you down. To activate them, just click on the boxes themselves when Bob is in the immediate vicinity. In general, player has only three buttons to control – forward, backward and jump. You can also pause the game at any time.

Bob’s World – Super Adventure will delight fans of the series with excellent graphics and soundtrack. Revive the memories of the classic games about the adventures of the plumber Mario. The projects are very similar to each other.

The game has a store where you can purchase new characters, as well as various skills for them. Some of the features require only real money. Just for this, we propose to download a mod that allows you to purchase paid items free. Please note that you can only purchase items and characters sold for dollars. You cannot buy things for coins free.

Bob’s World will please you with the fact that it uses the mechanics of the simplest runners diluted with original ideas of the developer. You have to run through several unique worlds, each of which offers you its own unique theme and design of locations. It will also please you that set of enemies remained the same when compared with the famous series about Mario. Success in passing each of the levels lies not only in crossing the finish line, but also in collecting coins, which are also recorded in high score table. The most valuable deposits of coins here are often hidden from prying eyes, which is a good incentive for you to replay the same level repeatedly. 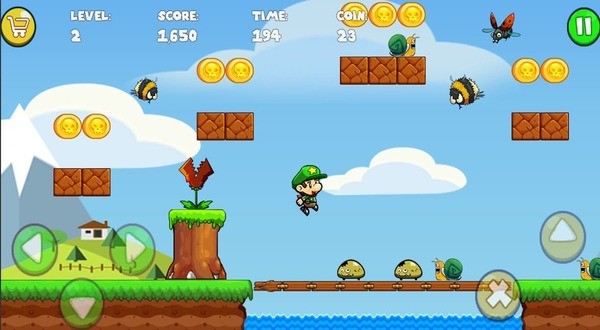 The main currency in the game is gold, which you collect during the campaign. Use it to buy various items and new characters. Get three lives for completing each level. If you fell into the clutches of mobs or fell into a pit, then you lose them. In this case, your hero gets to a random point on the map closer to the start. This complicates the process of passing, because each stage requires a certain amount of time for completing.

The developers of Bob’s World – Super Adventure have kept the spirit of the games about the legendary Mario, adding many interesting elements and modes. The game came out colorful and exciting. We recommend downloading the app to start an exciting race across different locations for fans of plumber series.