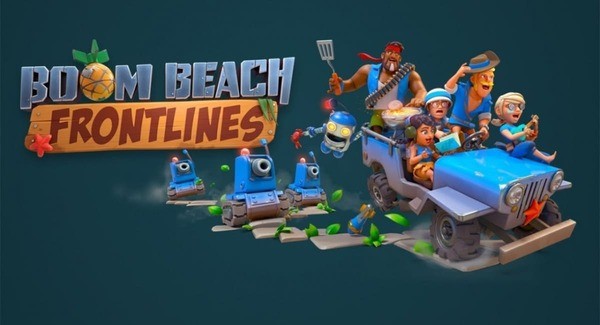 Boom Beach: Frontlines is an isometric team shooter. A key feature of the project is 9v9 battles with dividing into teams. The task is to destroy the enemy base. In the event of a player’s death, he can choose another fighter from his roster when respawning. Upgrade fighters between battles. This game is developed by Space Ape, which is a subsidiary of Supercell, the developer of the acclaimed Boom Beach. In total, Space Ape has released four games during its existence, three of which are clones of Clash of Clans. Today over 55 million people have played in them. The new studio project is not a clone, but offers users new gameplay features, as well as many interesting and fun hours.

Boom Beach: Frontlines will require a good reaction, logic and correct strategy from the player. Are you interested? Then we advise you to read our review of the new project.

Collect all the cards and pump them

Boom Beach: Frontlines currently has eight levels, each with new maps to unlock. Each card is a separate fighter, a structure to protect your tower, a vehicle to move, or a spell (ability). If we talk about skills, then it can be a treatment, a shield, an air strike, as well as many others. Each of the cards has its own rarity: common, rare, or epic. You need to pump cards, and subsequently they will become more powerful. Any card has its own characteristics that will be useful in a given situation. There are both melee units and snipers with good damage, but also a small amount of life. In general, there is a selection of fighters best suited to a given situation as with most strategies. The same applies to the weapons to protect your point and to the abilities. Use them at the right time and you will win.

Before the start of the battle in Boom Beach: Frontlines, you choose five heroes who can participate in the current battle. As soon as you die, you can re-select a fighter from the five previously trained. You cannot use other characters during the battle.

Boom Beach: Frontlines menu has a Rumble Bay tab. It contains information about the current operation and shows which card is currently in the game. The operation, like the card, changes every 4 hours. The main task is to capture two points with the help of your team and hold them for 10 seconds. In this case, you can get a victory. Battles take place in 9v9 mode. When loading a match, you will see which vehicles, upgrades and defenses are available in a particular battle. It is distributed randomly.

When you start a match in Boom Beach: Frontlines, you choose one of your pre-selected five fighters. Get to one of the points and stand in its center. Moreover, if there is one fighter at the point, the capture is slower than if there are two or three characters. More than three does not make sense, since in this case the speed does not increase anymore. Once the capture occurs, build a defensive structure to defend the point. If you hold two points for 10 seconds, then you win. Match time – 4 minutes 30 seconds. However, if the forces of the teams are equal and each has captured one point, then overtime begins until someone wins. Each player plays for his character, so 18 users meet at the same time on the location.

Choose the best tactics for the battle

A lot in Boom Beach: Frontlines depends on the choice of strategy. You can pick up a huge number of them here and each of them will be good in its own way. For example, teamwork is very important. If we talk about doctors, then they can be near you and heal you. Alternatively, they can run somewhere alone without much sense. There is a lot to do with the team and this is definitely a plus worth noting.

When you have captured one point, you can move to the second and beat it off. This is not so easy to do, since there are many rivals. At this stage, it makes sense to take ranged units using snipers or units with a bazooka. The bazooka shoots powerfully, but it only has one shot before reloading. The sniper has two shots, but it is very easy to kill him due to his low health.

To live longer, you need to not only constantly move around, but also use the yellow walls whenever possible. Some kind of obstacles can reduce the damage inflicted on you – you seem to be shooting from behind a wall. At the same time, reduce damage for the character you are attacking.

After the first launch of the game, its brightness and brilliance are striking. The developers have focused on bright colors that can catch the majority of users.

To upgrade your cards, you will need in-game currency. Earn it during battles, but to speed up the process, download Boom Beach: Frontlines mod APK for unlimited amount of money.

Important! At the time of this review, Boom Beach: Frontlines is in Early Access and available only to residents of Canada. If you live in another country, then you need to register with Canada VPN. By the way, for this purpose, you can use Betternet Hotspot VPN.

Please note that the mod may terminate its work, as the game is in the early access stage and is subject to constant updates. If for some reason the mod does not work for you, do not forget to follow our updates. We will update the game as soon as possible.

Every second of the battle, the hero earns five points to spend on the purchase of primary boosts. TDo it even after death, when you are revived at the base. Spend them on purchase of defense structures at the point. The main thing is to use the boost to death. If you do not do this, then the boost will drop out of your corpse and both allies and enemies can pick it up.

The variability of Boom Beach: Frontlines also lies in the fact that you can also choose improvements in addition to choosing characters. However, here everything is related to the points that you earn. Some upgrades, such as Tank, cost 900 points, which is a lot. It is effective, since the tank has great health and powerful damage. At the same time, the treatment costs 600 points, but the effect from it is less. Therefore, it is very important to calculate in advance how many points you will accumulate at the right time. Based on this, there is no point in using the tank skill at the beginning of the battle and you simply do not have enough points for it. It will be as effective as possible in the middle of the battle, when it is necessary to defend or capture points.

Boom Beach: Frontlines is an interesting and dynamic game designed for multiplayer. We recommend you to familiarize yourself with this project.