Botworld Adventure is an RPG in which you have to take control of brave bots and fight in exciting arena battles. Start your adventure in a new amazing world that hides many secrets, meet a variety of characters and get opportunity to find rare treasures. There are no restrictions on movement. Go anywhere, be it green forests, hot desert sands and other places. It is important to have a powerful enough squad of robots, because it is unknown in advance, how strong the enemy may be on the way. In turn, battles are based on tactics, your charges can jump, stun the enemy, make explosions and other actions with help of advanced artificial intelligence. You only need to plan a strategy to deal with enemy forces. Each of the robots has specific skills, so combine them with the talents of the main character to achieve maximum effect. Don’t forget to also download Tap Titans 2 and Ni no Kuni: Cross Worlds.

Botworld Adventure is in Early Access, but thousands of people have already reviewed the game, making up their first opinion about the game.

Botworld Adventure cannot boast of any interesting plot, although it is still present here. The main idea of ​​the project is the constant interaction of the gamer and his bots with enemies, as well as the exploration of the world. This concept allows users to write their own history and do whatever they want. Yes, most competitors can offer you some kind of storyline, but it often breaks off after you go through the training.

The developers of the application offer their fans an open and full of content world. All actions on the world map, as well as in battle, take place in real time, so you need to be constantly attentive. Explore picturesque forests and endless deserts in search of adventure. Find treasures and reveal many secrets. Be careful, try to assemble a powerful team of bots, because danger can await at every turn.

A distinctive feature of Botworld Adventure is a combat system, which has few analogues on Android application market, if any. As the adventure progresses, you recruit a squad of robots and control bots in short-term arena battles. Your players can jump, run fast, shoot and make explosions. The effectiveness of their techniques depends on the players. Each robot has its own unique abilities and skills. However, only you can choose the time to use these skills, as well as the area of ​​impact. In addition, each bot has a very powerful – the ultimate skill, which can be used once per battle.

It is worth noting that creating every robot in Botworld Adventure is a real art. To do this, players need special recipes, as well as parts. If you collect enough of them, you can create and improve heroes. Choose the abilities that robots need in the first place and improve them. Increase the damage, speed or life energy of the bot so that it can hold out in the arena for as long as possible and bring you victory. The fight can start at any moment, so always be ready to defend yourself.

Botworld Adventure features top view camera and all models of characters and robots look rather sketchy from a distance. Nevertheless, players will appreciate the use of many skills and abilities during battles. They are very colorful and varied. It is also worth noting the interesting sound design, which only adds positive emotions when playing through the game.

We suggest you use proposed version of the game by downloading a mod for free shopping. It allows you to purchase game goods, which in the original version of the project are available only for real money.

We checked the work of Botworld Adventure on several devices to check the nod convenience. Our experts confirm that everything works correctly without any problems. You can get access to paid purchases free with no additional actions. Don’t worry, the app in general and the mod in particular are absolutely safe for your android gadget. 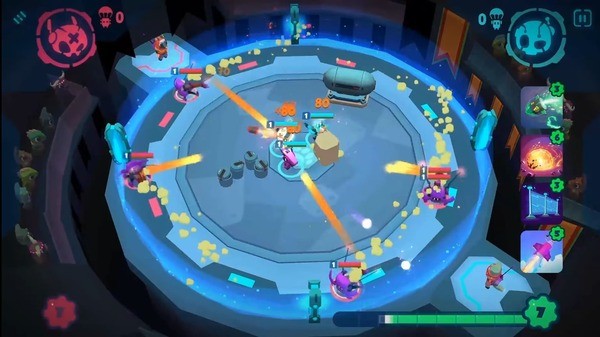 The battles take place in the best traditions of RPG projects. For the battle, you need to choose the members of your team and your main character. The fight takes place in a turn-based manner. Each character has a time for a move, during which he can make a blow or use a superpower. All of the above actions are available to the enemy. Naturally, you need to defeat your opponent to complete the level. If you cannot defeat the enemy, then you need to start pumping your team. As the level rises, the characteristics of fighters also grow, which has a positive effect on combat power.

Technically speaking, Botworld Adventure is a tactical strategy game where you have to fight in turn-based battles. At the same time, you control the squad, directing each bot in turn. Collecting a definite, ultimatum hand will not work here, because all opponents have different properties. It is necessary to choose the most versatile composition. The complexity growth with the fact that player receives recipes and parts for robots at random. You cannot influence this aspect of the gameplay in any way. However, if you choose the right tactics, then everything will work out. The game has English localization. It is not difficult to understand the project’s functionality, as the menu here is intuitive.

Botworld Adventure is an interesting role-playing game with strategy elements where you need to think over the right tactics and assemble the best team of robots.