Bully: Anniversary Edition is a third-person action adventure from Rockstar Games. This game is somewhat reminiscent of the most famous developer’s creation – the Grand Theft Auto series. However, it brings many new things at the same time. Play as bully Jimmy Hopkins, who changes schools not the first time in his life. As in other games from Rockstar, you have almost complete freedom of action. Complete missions, use weapons and vehicles, study various school disciplines and bully. However, be careful! Don’t get caught by headmen, teachers or police during pranks. You can check out other iconic game from Rockstar Games by downloading GTA: Vice City or GTA: San Andreas.

Bully: Anniversary Edition is another quality game from Rockstar Games. Find out more in our review.

Plunge into an interesting plot

Bully: Anniversary Edition is open to exploration and divided into missions, just like GTA. However, there is a difference between projects. Instead of car and rocket launcher, the hero has a skateboard and slingshot. Consequently, your actions take on a different scale. If in GTA, you could even summon the National Guard, then in Bully: Anniversary Edition three alarmed wardens are enough for you. There are no drugs and contract killings in missions, as everything is much simpler. You need to deal with hooligans, run away from the teacher, put a stink bomb on an unpleasant character and even work for a physical education teacher. In general, everything is somewhat simpler and more naive, which gives the game a certain charm. 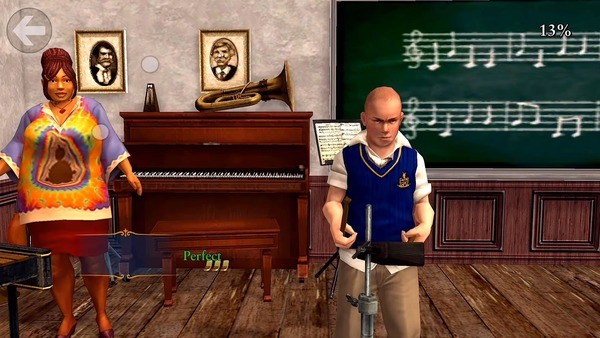 Bully: Anniversary Edition’s daily game loops keep you attending classes and create the most realistic school desk experience. This means that even in the middle of a mission, you have to drop everything and run to class in order to stay out of suspicion. Attending classes includes several mini-games. For example, you need to press the buttons in a given order to conduct an experiment during chemistry lesson. In addition, you need to make up as many words as possible from the given letters during English lesson. On top of that, the character needs sleep every day. All of these requirements add to the game a familiar sense of urgency. There are ten disciplines in the game, including physical education, mathematics, chemistry, music and photography.

In addition to everything, the contingent of students is very close to reality, as in a real school. There are six of them: Bullies, Nerds, Preppies, Greasers, Jocks and Townies. Depending on the actions of a specific mission, not only your reputation changes, but also the students’ attitude towards you. Everything is like in real school life. However, the attitude towards still comes down to the main plot. It changes regarding your actions in the game when the hero completes missions. 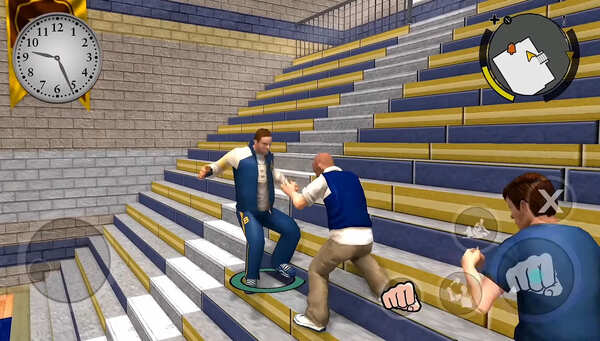 Challenge your friends in multiplayer mode

The main feature of Bully: Anniversary Edition is the asynchronous mode for several players. Here you can participate in exciting school competitions for two people. Call a friend and see who of you can dissect a frog, solve a rebus or a math problem faster. Take advantage of the new feature in a special edition for android gadgets.

Bully: Anniversary Edition takes all the best from past versions and adds many nice improvements. The graphic component has really become a few steps higher and the game no longer seems “old-console”. The app is quite demanding on technical characteristics of Android device, but still you can experiment with settings in main menu. Like other Rockstar games, Bully allows you to save game scores in Rockstar Social Club cloud. 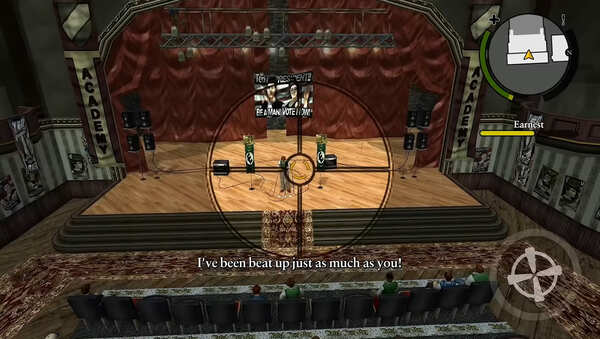 To begin with, Bully: Anniversary Edition is a paid game on Google Play. However, you can download the game free using our mod. In addition, it provides you with unlimited money for all your needs.

Our team checked the functionality of Bully: Anniversary Edition and its unlimited money feature. Firstly, the game is now free for you. Secondly, you can take advantage of endless resources and buy almost anything you want for your hero. However, you can buy in-game items only if you unlocked them after completing some missions. We also checked the game for malwares. It is safe for your device. Download our mod along with cache by reading our tips below to take all advantages.

The story in the game develops gradually. Initially, the game world is rather tiny. It starts with five sites with all sorts of additional missions, but expands later. An easy crafting system is available in the project where you can create various items such as stink bombs and so on. The possibility of romance with other playable characters is also available. At the same time, you are deeply involved in the main storyline, which makes you the king of the school. Each line of the game dialogue is important. Moving through the conversations, jokes and arguments of other characters you can learn more about story plot of Bully: Anniversary Edition. 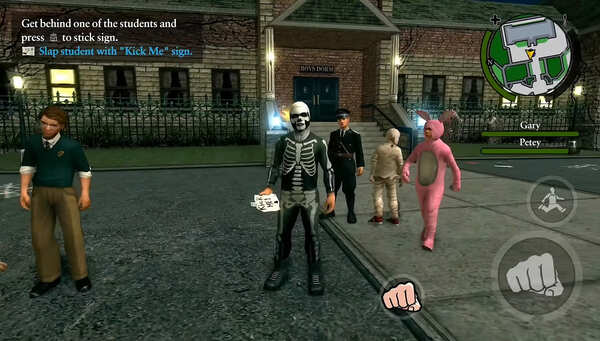 As in GTA, the combat system is simple. Most of the brawls take place in hand-to-hand mode, while you can learn a ton of new techniques from side missions. The developers replaced shotguns with slingshots or other items that you can find in secluded areas. System of automatic guidance to an enemy target is also familiar, be it a fistfight or a battle with the use of ranged weapons. Bully borrowed the combat system from GTA, but added a few additional features, such as throws, jerks and grabs.

In fact, Bully: Anniversary Edition is a slightly smaller version of GTA in a school setting without bloodshed and corpses. If you are a fan of Rockstar Games, then be sure to check out this project.

Don’t forget to delete the original version of Bully: Anniversary Edition before installing our modified version to prevent errors during installation process.