Car Eats Car 3 is a mobile racing game developed by SMOKOKO LTD. Play an arcade game with elements of a linear platformer, made using two-dimensional graphics, as well as extremely simple control mechanics. The main characters are predatory cars, which in the last part were chasing the protagonist. Each of these cars wants to take revenge on the law enforcement officers who put them behind bars. Get behind the wheel of a monstrous harvester, pickup truck or bus. Activate rockets, machine guns and rams, and forward towards new tracks, car modifications and higher records. In addition to changing the setting, developers redesigned vehicle fleet. Now you can even play as an airship or a helicopter. If you are passionate about racing, then download F1 Mobile Racing and Tuning Club Online. 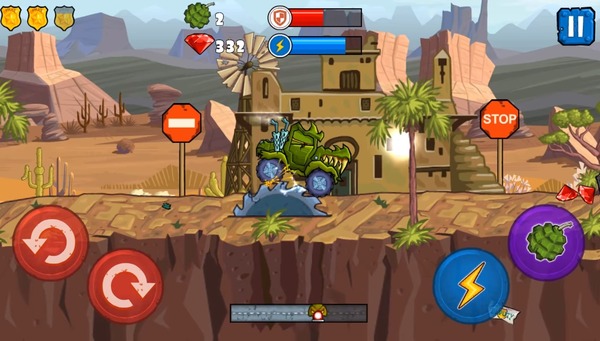 Unlike first two parts of the series, here you have to play not for a good man, but for a real predator. If you are interested, please read our review.

It is worth starting right away about the characters used in this project. Funny cars that have eyes and a huge toothy mouth represent all the characters. In addition to the mouth, cars have an impressive arsenal of gadgets and weapons to destroy police and civilians. The variety of cars available here is great. If you are a big fan of the series, then you will immediately recognize some of the characters from the past parts.

Each car has a number of parameters to improve:

In addition to the above characteristics, each character in Car Eats Car 3 has a number of gadgets: rocket launcher, magnet, regenerator and EMP. Each of the devices, although it costs an impressive amount of in-game currency, guarantees you the complete destruction of all the targets around you. There are also bombs thrown by the hero. Note the following varieties: regular, fragmentation, incendiary and reducing bombs. Just imagine all the chaos to create with such an arsenal. Big races are waiting for you

Campaign of Car Eats Car 3 consists of several chapters, each of which contains dozens of unique stages. Each stage requires you to reach a conditional finish. During such a trip, you need to collect crystals, which is the main currency here. Find a lot of jumps, obstacles, barrels, boxes and a lot of other stuff.

You can encounter bonuses to restore your armor and turbo level on the track. This is important, as the police cars will ram you all the time. We must not forget that the police also have access to the above-described arsenal of weapons. You need to destroy both police cars and civilians to get three stars.

You will find short and fast-paced survival races made in an arcade style in Car Eats Car 3. The gameplay assumes that here you will play for bad drivers who want to get out of prison with all their might. The whole process features eye-pleasing graphics that creates right atmosphere for everything that happens.

Crystals can help you improve car and become the fastest racer in this game. If you want to get even more, then download Car Eats Car 3 mod for unlimited number of crystals.

According to the plot of Car Eats Car 3, you find yourself in a cartoon world with living cars, police and criminals. Your comrades got in prison, but you manage to elude the tenacious clutches of justice. Now your main task is to save your comrades. Various devices, driving skills and turbo mode will help you with this. Players have to go from own cell to the very last boss, which is huge police car. At each new round, the developers have prepared new traps and obstacles. Moreover, other police officers will constantly chase after you. Will you be able to survive this dangerous test and help your friends? Only driving skill can help you in this matter. 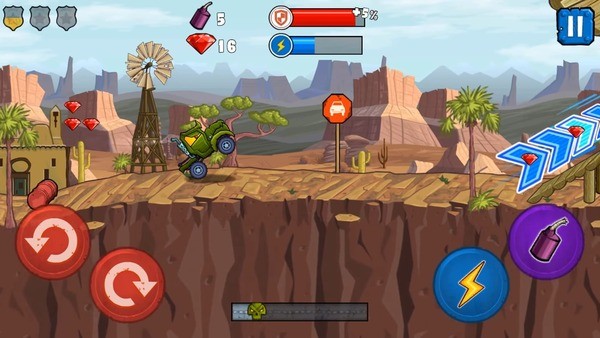 Dozens of different tracks and locations are available in the Car Eats Car 3. Each of them requires an individual approach and performing different tricks. To get the maximum reward for each stage, you will not only have to drive in a straight line, but also drive into various branches. Climb steep scenery and perform tricks. Win any challenge with convenient auto upgrade system. In addition to the fact that you can get new and more powerful copies, it is possible to improve them. To do this, you have to earn many crystals. When a sufficient number of them are collected, you will be able to pump defense, speed, damage and acceleration.

Completing levels and completing tasks in Car Eats Car 3 brings rating points, as well as crystals. This is not the only reward that the developers have prepared. Here you will find a section with titles and achievements. Additional reward will be available to you after you reach the next rank. It can be anything from game currency to a new car.

Download Car Eats Car 3 to immerse yourself in the fun process of crashing toy cars. Use completely non-childish guns to break through to your opponents, and then arrange a total apocalypse together.