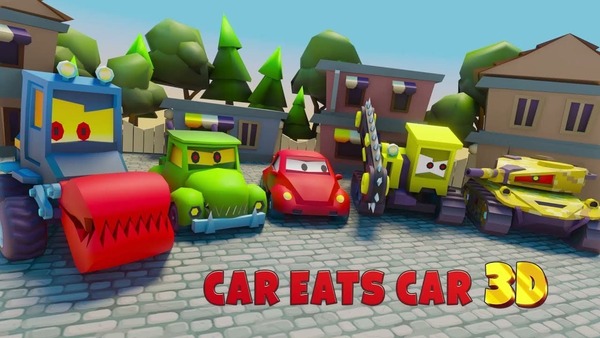 Car Eats Car 3D – Race Survive is the continuation of a series of exciting races from the SMOKOKO LTD studio. As you might guess from the name, the game now features three-dimensional mode. The rest of the gameplay remained about the same. Players will have to drive to the finish line through bumpy terrain and need to get there with minimal losses and damage. Of course, you need to not only reach the end, but also free friends imprisoned along the way. To do this, you have to properly gain speed and crush everything in its path. Save the entire planet from the threat! And if you love racing, then download also They Are Coming – kill stickmen and Real Car Parking 2.

Car Eats Car 3D – Race Survive is a fun arcade racing game where the player has to not only cross the finish line, but also literally eat other cars. All the details are in our review.

Try to escape from the police

Main task is simple – destroy all the policemen, get to the next location and inflict damage on the aliens who are attacking the planet. After that, access to a new car will open in the garage. Improve each of them, as this will require crystals and quite a few, so collect as many red pebbles as possible along the way. The police will relentlessly chase the player throughout the level. They are slow, so it will be much easier to break away by pumping speed. However, do not flatter yourself. There will be obstacles ahead that prevent you from passing, sometimes these are other cars, Just gobble them up, so you will not only remove the obstacle from the road, but also get valuable materials.

Over a dozen cars

There are 16 cars in Car Eats Car 3D – Race Survive. Most of them become availble for completing certain missions, dungeons, defeating the boss or in the arena. Some are only available for real money. In any case, there are plenty to choose from, who will become your favorite hero? Will it be a berserker armed with a huge chainsaw? Maybe a tank minatory with its giant cannon? Open them all to choose your favorite. Beatley, Gator and other legendary cars will be available for selection. You just need to go through a few levels to use them.

The main indicators of the car at the level are Turbo and Defense scales. Protection is the life of the car, while turbo is the amount of acceleration. Players can upgrade all these parameters in the garage. In general, four parameters are available for pumping: armor, turbo, speed and damage. In addition, put individual improvements on the car – gadgets. This group includes Rocket Launcher, Magnet, Freeze, Regenerator and a mysterious EMF device. You can also get stronger with your pet. One of them – Bombastic – is given on the fifth day of the game, subject to daily entry into the game. In general, it is possible to buy them for real money.

The main difference is three-dimensional graphics, which developers implemented in this project for the first time. In addition, you will find fun and perky music during the gameplay.

We recommend you to download Car Eats Car 3D – Race Survive mod APK, which allows you to get cars even if you do not have enough game currency. Turn on the Internet for the mod to work, as well as log in to Google Play Services.

Car Eats Car 3D – Race Survive is a fun arcade game where players have to go on a long and difficult journey. Drive a living car and move constantly forward, overcoming all the obstacles in your path and fighting with the same animated cars that want to set you aside. The main goal is to get to your master and not die during the passage of the next level. The gameplay is quite monotonous, but at the same time interesting. Speed ​​up, jump over obstacles and avoid encounters with enemies. During all trips, do not forget to collect crystals, for which you can improve your car.