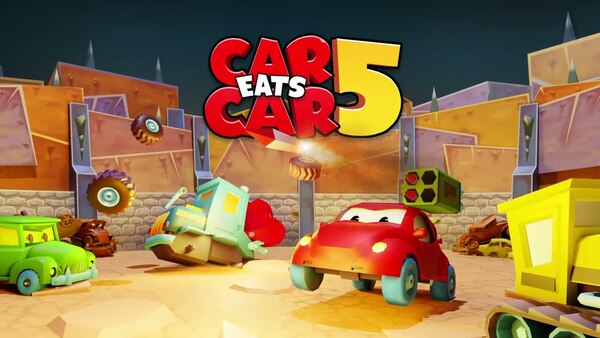 Car Eats Car 5 – Battle Arena is a crazy mobile racing simulator from SMOKOKO GAMES. Welcome to a fresh continuation of the legendary series of games where cars will again eat each other in order to satisfy their hunger. Increase power and not turn into scrap metal. This time the application takes place in the arena. Players have to drive to the finish line through bumpy terrain and need to get there with minimal losses and damage. You need to not only reach the end, but also free your friends who are imprisoned along the way. To do this, you have to properly gain speed and crush everything in its path. If you are interested in racing projects, then download also Wheelie King 5 – Mx bikes 2023 and Real Driver Pro: Car Parking.

If you are interested in details about Car Eats Car 5 – Battle Arena, read our detailed review.

As in the first parts, you are waiting for survival races in Car Eats Car 5 – Battle Arena, where the most important thing is to cross the finish line, collect diamonds and destroy enemies along the way. You will come across completely different opponents in the form of cars and none of them is set to welcome. Pick up explosives and knock out your opponents.

The game consists of dozens of levels and you will have a nice reward at the end of each. The car will move forward on its own, and you only need to control its slopes, use acceleration and do not forget about weapons. As the latter, both conventional explosives and machine guns can act, which power will grow from level to level.

At the time of arrival, you need to drive the car, not allowing it to roll over onto the roof and not lingering in one place. Enemies will attack from all sides, watch the frame strength level and don’t let them destroy you. The game has received excellent design, new locations, cooler cars, hundreds of levels and nice improvements that will help in boss battles. You will be able to improve the armor of your car, its weapons, appearance, as well as maneuverability and mobility.

Among the additional equipment, you can find a freezer that can slow down the movement speed of opponents, and a generator that can restore strength lost during the race. There is an obligation to use old and inefficient cars in some missions of Car Eats Car 5. They look decrepit and outdated, and their goal is to take revenge on brand new sports cars. Although they are not as powerful, their anger will allow them to move mountains and punish the younger generation of vehicles properly.

Fascinating gameplay and excellent art have become the hallmark of each game in the series. However, it has always had one drawback: the lack of an online mode. Here everything focuses on the multiplayer. You can compete with other players, earn a rating and upgrade your cars. All this looks very interesting and exciting. Based on the results of the races, you can see a rating of players in form of asterisks. There is also a general rating table where you can see your place among all players.

In addition, Car Eats Car 5 – Battle Arena has a rank system. The higher your rank, the greater the reward for winning. By the way, to participate you need to pay a fee in the races. If you come last, you will simply lose everything. The races take place at different levels of difficulty. The higher the difficulty, the higher the fee – but the reward also increases. It is important to assess your strengths in order to be in the black. However, it is better to understand this already in the course of the game.

If you want to enjoy the gameplay to the fullest, download Car Eats Car 5 mod APK for unlimited money and diamonds.

Take part in exciting arena battles and fight against players online. Perform various maneuvers that can defy gravity itself. Use the unique look and structure of your car to overtake your rivals. Crazy curves, burnt tires, hill climbs, crazy loops and much more await their drivers. In real time, players will have to fight each other on the racetrack.

Racing tournaments appear in the game every day, if you participate and win them and then there is a chance to get a good reward. In the course of Car Eats Car 5 – Battle Arena, you can choose any of several cars.

Car Eats Car 5 – Battle Arena – multiplayer battle will prove who deserves to be a champion and who better to gain experience. Three-dimensional graphics and vibrant colors will make you get more fun from the gameplay, which is addictive for a long time.