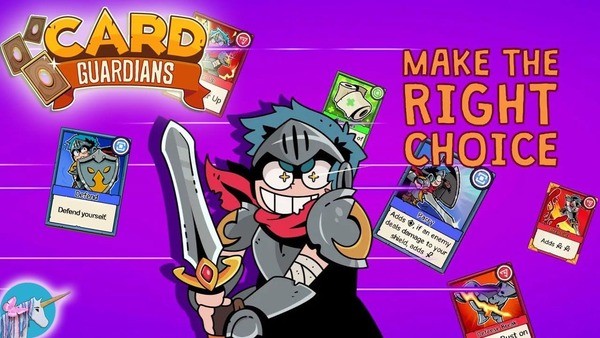 Card Guardians is a card game from the developers of Tapps Games – PT. Your main task in this application is to correctly combine cards and defeat enemies with help of various skills. Attack enemies, add armor to yourself, use buffs and debuffs. Crush enemy with a deadly super skill and equip the hero with several epic items to increase his properties. Upgrade things to become even more dangerous. Use different tactics and combinations to achieve the best results. Remember that everything depends only on your ingenuity and prudence and a little more on luck. Complete all levels and become the king of Valentia. Each turn can decide the outcome of the battle, so try to make the right choice! Also, download Shadow Knights: Idle RPG and Looney Tunes World of Mayhem.

Check out our review for a closer look at the game.

The essence of Card Guardians is extremely simple and at the same time rather confusing. You have a brave hero and a deck of cards with different abilities and skills at your disposal. There are three types of cards: red, green and blue. Use three cards in one turn. Red cards are attackers. Using one of these inflicts a certain amount of damage on the enemy, which depends on initial indicators and armor. Green cards are defensive. You can install armor on your character with their help. Blue is responsible for various buffs and improvements. For example, you can weaken an opponent with such a card, which later allows you to deal more damage to him. Initially, you don’t have a lot of cards at your disposal, but they will be added as you progress. Each successful battle provides you with opportunity to choose one of three cards, but you can take only one to your deck.

The developers of Card Guardians have shown a lot of imagination and created various funny and terrifying monsters. Here you can meet rotten zombies, at first glance cute slugs and even some kind of Cthulhu. Sometimes two opponents may be waiting for you at once – in this case, they will make their move in turn. One of the enemies may have a bonus to the attack and the other – to the defense. Now, about a hundred levels are available in the application with completely different enemies. Accumulate enough armor and attacks to defeat them. Try to improve your hero in time, because your lives and armor will not replenish when you go to the next level!

Many tactics to win

Since Card Guardians is a card game, don’t forget about luck. First, the correctly chosen strategy for the duel plays a role. To begin with, you must make the right decision when choosing one card for the deck. Already during the battle, it will be possible to choose from three cards. Take out one of them, be it attack, defense or buff.  Moreover, players can combine some of them. For example, it makes sense to first weaken the enemy with a blue card and then carry out an attack, which becomes stronger or even doubles in presence of this debuff. If there are several enemies, you need to calculate where to throw forces in the first place. Correct tactics save your hero’s life and help him save as much vitality as possible before the next fights.

Card Guardians have beautiful three-dimensional graphics, but it is worth noting separately a variety of creatures that act as your enemies. They all look very original and funny. We can see that the creators have tried seriously. The game also has quite annoying music and other sound effects. You can turn them off if you want. The app has translations into six languages.

Upgrading any hero in Card Guardians requires gold coins. Earn them in victories in battles, but its revenue is extremely small. The project has the opportunity to buy coins for donation. However, we offer you a mod that allows you to make free shopping initially available only for real money. Therefore, you can get an almost infinite amount of game currency and spend it on your hero.

Among other interesting mechanics of Card Guardians, the equipment system is also worth noting. Things will come across to you after passing some levels. They increase the characteristics of the hero – attack, defense, as well as the number of lives. It is worth noting that your hero doesn’t put new items automatically, as you have to personally monitor this process. Inventory allows you to improve the level of items. Each such improvement gives an additional bonus to the character.

Another feature of the battles in the application is your hero’s super cleverness. It works if you used a card of the same color three times in a row during your turn. This is not so easy to do, because sometimes such cards do not fall out, and even if they do, it is risky to attack three times in a row. You can get a lot of damage in return. At the same time, your hero’s skill is very powerful and worth using. The character deals damage to the opponent several times and takes away a large amount of HP.

Card Guardians lets you think and have fun. The mechanics of the project are somewhat reminiscent of the well-known Hearthstone, but with own zest and differences. We strongly recommend all fans of card games to try this project.