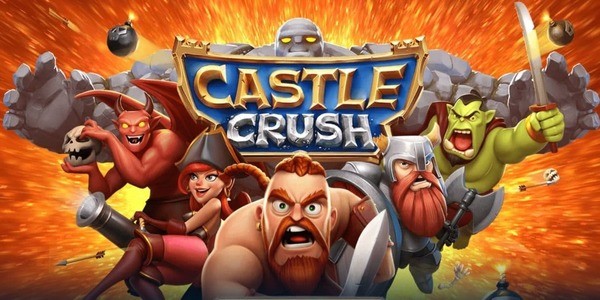 Castle Crush from Fun Games for Free is a linear real-time strategy game where the player’s task is to destroy an opponent’s castle. The battles within the project take place in 1v1 mode. Each gamer has a deck with the creatures that he can use on battlefield. Players take turns calling them to one of the three lines, trying to destroy the opponent’s defense. It is extremely difficult to come up with a strategy that can work in every battle. You have to literally adjust to each enemy and choose different tactics, as well as combinations of heroes. In addition, Castle Crush creators managed to combine card and tower defense genre. It looks very advantageous against the background of competitors. If you are interested in this kind of gameplay, then we also recommend you Arknights. Among other strategies, our team can offer Grow Empire: Rome.

The app has more than 10 million downloads only from official sources, while its average rating is 4.4/5.

Choose from various types of units

Castle Crush gameplay is very varied because there are several types of units. We can roughly divide troops into four categories. Let us consider them in a little more detail: 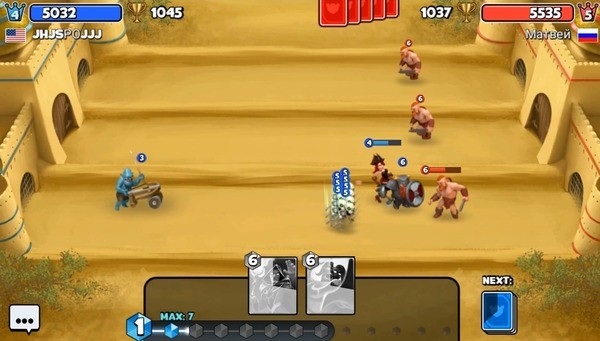 The battles in Castle Crush look epic. There are two players on the map, one on the left and one on the right. There are three paths between them that serve as a battlefield. User’s task is to select a warrior, magician or siege weapon on the panel with characters and move him to one of the three tracks. Your troops fight automatically. Player can only use abilities, as well as drop various bombs or freezes on enemies. In order to be able to send a character into battle, you first need to accumulate a certain amount of mana. Play on your own or team up with friends. Win battles against real opponents who, unlike bots, can always come up with a non-standard move.

Think and strategize to win

Castle Crush allows you to fight other gamers on a small playing field. You can get a win in two ways: with a strong army and strategic thinking. However, the army strength does not play a key role, as you can face players with the same rating as you. This means that power of thinking comes to fore. Play standard fights or participate in tournaments. Each victory adds points to the rating table, while a loss can deduct several points from it. Players need to constantly work with deck, change cards and come up with new tactics to win more. Any underestimation of opponents leads to immediate defeat. 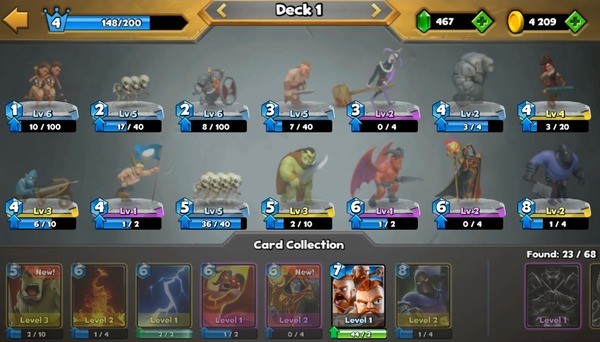 Castle Crush uses 2D graphics with many additional visual effects and animations. In addition, the heroes themselves look just amazing. They differ not only in the available characteristics, but also in appearance, size. Moreover, during the gameplay you can freely upgrade them to make them look in a new way. The game also features a very varied soundtrack.

Our team offers you to download Castle Crush with mod for no mana cost. With its help, you can use game skills without spending mana on them. 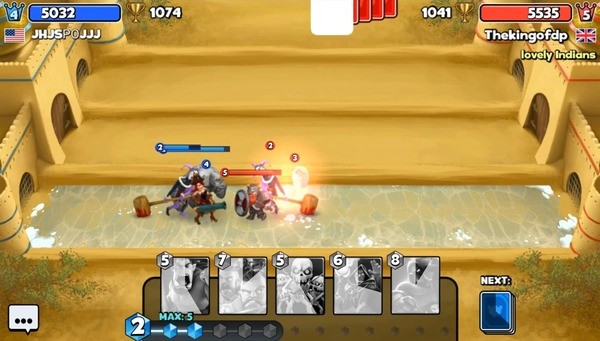 After installing the game, you can use a special menu in the upper left corner. Click on it and move No Mana Cost slider to active position. At any time during the gameplay, you can turn it off and play without cheats. Please note that the mod doesn’t work online.

The battlefield in Castle Crush has three lines for both your creatures and opponent’s warriors. At the beginning of the battle, each of participants has two units of mana, as well as a hand of three cards. Use the deck to call the first fighter or just save it up. Manna appears with each subsequent card, but the drop of certain creatures has random order. Therefore, it is very important to complete the deck as balanced as possible. 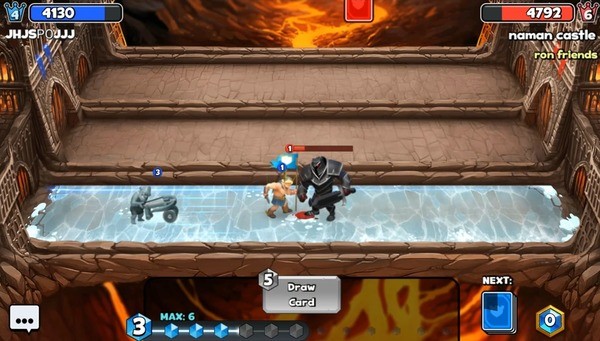 If you have more than five cards in your hand, the sixth simply burns out. All creatures and spells in Castle Crush have categories according to their rarity. Raising the level increases characteristics, as well as strength of unique fighter characteristics, if he has any. The controls in the game are as simple as possible. Touch and drag the creature you want to call onto the battlefield. If we are talking about a card with an instant effect, for example, a bomb, then you just need to indicate the area where you want to direct the explosion.

Castle Crush is one of the best linear strategy games. There is no need to donate for a quick start. In total, its gameplay is intuitive, simple and can bring you a lot of fun.

How to install Castle Crush Mod?

Don’t forget to delete the original version of Castle Crush before installing our modified version to prevent errors during installation process.