CATS: Crash Arena Turbo Stars is an incredible action toy from the developers of Zeptolab studio, which allows you to engage in robotics and fight with your inventions. A lot of unique equipment, cool weapons and interesting modes allow you to have fun in your free time. Events of the game take place in arenas where evil cats fight on their powerful machines. Initially, attach wooden reinforcements to a wooden base, but gradually the material, quality and effectiveness of weapons will grow. The stronger your opponent, the better you have to try to surpass him in technical terms. Enemies are constantly changing, which is why you need to think over weapons every time, using effective tactics. By the way, you can also download Truck Wars, which has similar gameplay. 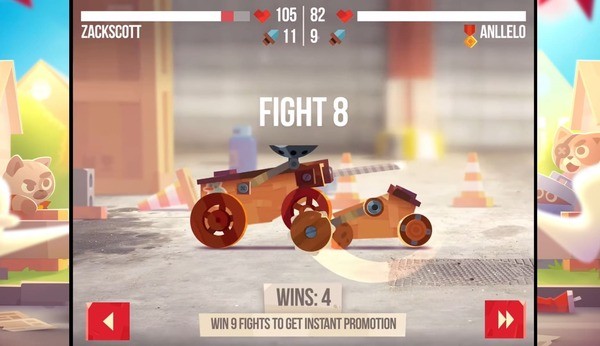 After you have installed and launched the game for the first time, you will have to select your tanker. Cute kittens act as drivers of combat vehicles. You can choose the suit, and later the insignia, for example, stickers on the tank. After that, you will receive a starter set of parts. The design of any tank in this game provides for the following components: body, main and secondary guns, chassis. At the very beginning, you have the simplest case with one seat for a weapon. For example, a drill or a saw. Later, you will receive advanced parts that allow you to create efficient designs. Some weapon options have bonuses only after installing on a specific type of hull and so on.

The entire gameplay takes place in multiplayer mode. Even in a single battle, your opponent will be a real person, not a virtual warrior cat. Please note – you will not be able to choose opponents. You cannot assess power of the opponent’s car before the start of the battle. His car appears only in the arena.

Use energy to install new elements in the car. Find it on the screen with a lightning bolt icon. If you spend it completely, then you will not be able to install something new. Wait for it to recover, or replenish the scale for the currency. 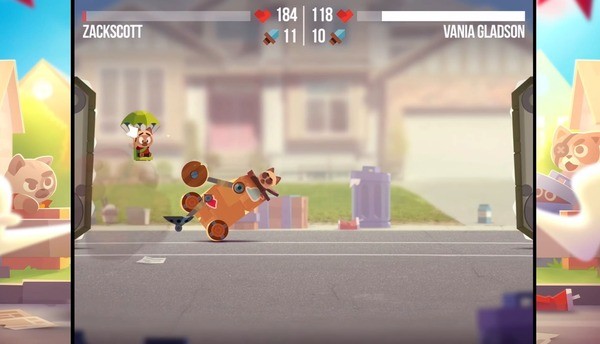 It is important to understand that each combination of parts in CATS: Crash Arena Turbo Stars has strengths and weaknesses, so creating the perfect fighter will take time and effort. It is worth paying attention to the hull to increase stability and prevent the enemy from knocking you over. The wheels can also be used to an advantage, greatly improving stability. The number of parts for installation is limited, but it grows with the level of pumping. Of course, all kinds of devices aimed at destroying your opponent deserve special attention. It can be rocket launchers, drills, guns, chainsaws and much more. Different weapons have different damage.

Project showcases great graphics. The design, animation and special effects are superior to many other games in this genre. Here you will find cute cat characters with charisma and charm, beautiful surroundings, as well as beautiful engineering structures. Particular pleasure can be obtained in battles where rockets explode, ramming and shelling occur.

We suggest you download CATS: Crash Arena Turbo Stars mod, which allows you not to take damage from weapons. To do this, you need to push your opponent under the shredder.

All the action focuses on independent creation of new car designs. Earn details – receive them for winning on the sweepstakes. Exchange them for others. These are cases and gadgets, wheels of various sizes. For details, the participant is offered devices for drills, a chainsaw and rocket or laser installations. All this helps in creating a small but effective deadly robot. 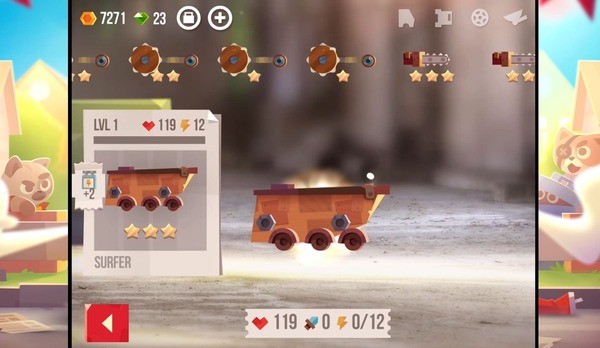 When building a killer machine, there are energy limits. CATS: Crash Arena Turbo Stars allows you to fight indefinitely, but to spend the money received for the victory. It is better to open the package with new design elements immediately. Otherwise, you will have to wait several hours. Therefore, regardless of whether you paid or not, you lose only in time. New details and bonus prizes will be yours in any case.

To fight while playing in such a game is a direct mileage. Unexpected fights and organized tournaments are at your disposal. Participating in stages of the tournament, you need to hold out for several battles. At the same time, either hold on to the end or win the required number of victories in a row. Ensure a transition to a higher league, followed by the receipt of fancy details and cash receipts.

CATS: Crash Arena Turbo Stars allow you to put together an incredible battle using your best engineering skills. You will make something indestructible and destructive from a nondescript machine. Funny characters cats will entertain you throughout the passage.