Arcade puzzles have become a real hit, so now you can find a variety of games in Casual section on the Play Store. One such game is Cats & Dogs 3D from Lion Studios. Main character in this unique puzzle is a magical creature, which is the prototype of the famous cat-dog. In particular, it is a kind of worm with heads of two animals. The main goal is to overcome a variety of obstacles, but controlling the main hero is quite a difficult task. Only with the joint efforts of the two halves, you will be able to go through a variety of tests: from cleaning up mud to helping other animals. Download also Brain Go 2 and Erase Her: Puzzle Story.

Cats & Dogs 3D has become a real godsend for those who are already bored with conventional 2D puzzles. Now, the game has more than 1 million Play Store users, 3 thousand of them rated the game at 4.4 points. Moreover, 3D puzzle is ranked second in the top free casual games and is very popular with both adults and children.

Players have never seen such a puzzle before – it is necessary to manage two parts of the cat-dog at once. Each of these parts must perform its function, sometimes even simultaneously. Therefore, we can rightfully consider the puzzle as one of the best. Indeed, in addition to unique controls, you have to be responsible for actions of the main hero, because some levels require special attention and logical thinking. 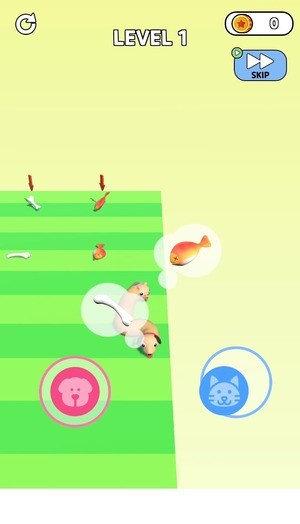 At the very beginning of Cats & Dogs 3D, the gamer will be able to play as a completely simple-looking cat dog: beige body, ordinary collars of different colors and muzzles. However, you can change appearance of the main character in Skins section. There are more than ten different skins to choose from regular black to themed costumes such as prison inmates, cooks, artists and even doctors. In addition to skins, it is possible to try on hat, collar, crown and glasses. You can change your appearance for a certain amount of gold coins, which are the main currency in the game.

Each new level of Cats & Dogs 3D prepares a series of difficult challenges for player in form of solving problems on the site. At the very beginning of the game, you have to control the cat to get goodies. The next levels prepare challenges that are more difficult: kick the ball into the goal, put out the fire, help the chicken find its mother, knock down all the bowling pins or water the pumpkin. Many obstacles take more time to reason, but the cat-dog gives clues: each of the animal heads thinks about the object with which it should interact.

Project features 3D graphics, which is the main advantage of Cats & Dogs 3D. After all, the main character has a form of a voluminous sausage,  with two animals on different ends. Playing field may remind a bright green lawn, while main obstacle objects are noticeable buildings and objects that have own color palette. 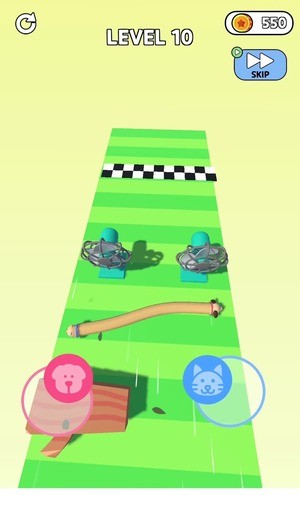 There is no musical accompaniment in the game, because developers paid all attention directly to individual sounds: meowing or harbor, rolling or moving certain objects, as well as interacting with them. The lack of musical effects creates a certain atmosphere that helps to concentrate on the gameplay process.

The game is available in the Play Store free of charge, but the main problem of Cats & Dogs 3D is game currency. Often, gold coins are simply not enough for a new skin or decoration for protagonist. However, you have the opportunity to download the game with a built-in mod for unlimited money. Use it to buy the best skin for playing the puzzle.

Our testers have checked the game and its mod to confirm overall functionality. At the same time, the mod may malfunction, as the developers try to constantly update their application and fight foul play. If you have any problems using the mod, then do not forget to follow our updates.

The very first levels of Cats & Dogs 3D come down to getting treats for each side of the character. However, the higher the level, the more difficult the obstacles on the way to solving. Already on the tenth level, you will have to grow plants, help other characters and even participate in unique sports games. Ride hot air balloon, extinguish the fire and drive nasty birds from the garden. 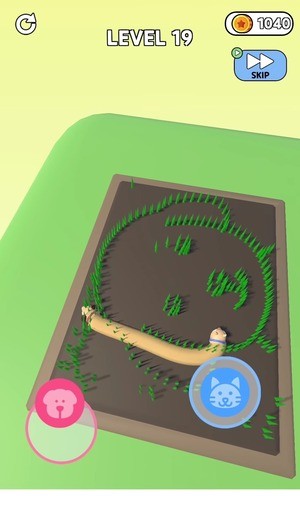 Unique Cats & Dogs 3D puzzle has become popular due to its unique gameplay and controls. Main character is the cat dog and each side of the moving sausage must cope with its specific task to solve difficult puzzles.