Caves Roguelike – explore caves and get resources in an exciting roguelike from 36dev. There are caves in which the player digs a path with a pickaxe. Dungeons hide huge riches and a whole army of monsters. The main character is constantly fighting opponents in changing game locations. To complete the game, you can choose a companion – a soldier, a sniper or a character without abilities, very strong in endeavors. After death, the character goes all the way again and studies the dark confusion of underground caves. However, the experience gained helps him in successfully overcoming obstacles and resisting numerous enemies. Levels change every time you enter the game. A variety of weapons, elixirs, ingredients and armor provide complete unpredictability of the route. In this case, the main task is to collect weapons and fight enemies. If you are fan of this kind of gameplay, then download also Rage of Destiny and Mystic Gunner.

The project in question has more than a million downloads. The average rating of is 4.5 points and the comments are full of positive reviews.

All fans of the genre will definitely delight Caves Roguelike, as it features all the canons of the concept. It is a classic roguelike with randomly generated levels and irreversible death of the character. In case of his death, the player cannot load the game and must start again. These seemingly simple features provide a high replayability of genre representatives, making you want to return repeatedly. Caves is a representative of the roguelike genre with a turn-based system. In this game, you are a war miner. You go down into a mine filled with a variety of opponents in order to get as much resources and money as possible. There are many enemies, so it will be difficult to describe all of them. 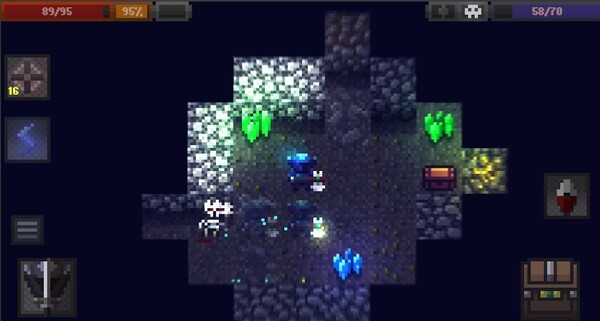 You can change the surrounding landscape in Caves Roguelike. There are different locations on the levels. Runic altars that give temporary improvements. To activate you need to step on each part of the rune, which is impossible in battle. Rooms with transit portals leading to the hub from which you start the race, rooms with loot, descents to sublevels, portals and machines.

The hub is a network of rooms in which different machines are located. Vending machines with the ability to buy loot or an upgrade (temporary or permanent) before the race, a workshop, a recycler (recycle things in exchange for coins) and a portal.

Caves Roguelike is a real virtual sandbox where you are free to do whatever your heart desires. You will not find a storyline or a dialogue system here, but these components are useless here. Immerse in an abundance of crafting recipes, extraction of different types of materials and search for food. The developer did not forget to add here a rather curious battle system. Although open world looks friendly, but you are very likely to face bloodthirsty enemies who will immediately want to kill you in mysterious caves at night.

The elements of survival are paramount here. You need to look for food, spending a lot of time hunting, get water and equip your home, which becomes a fortress for you. Shelter is extremely important here, as at night your house can attract intruders who want to feast on your character. All of the above features by unique pixel graphics that set own trend. 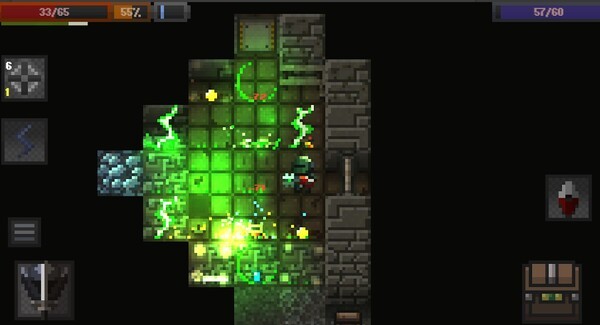 The application features pixel graphics. This solution has several advantages, the main one being high performance. However, there is also a disadvantage – not everyone likes this design. The soundtrack in the game is excellent. Enjoy sounds of dripping water echoing, rumble of the wind and sounds of digging or footsteps. You can really enjoy playing Caves Roguelike with headphones on.

Correct development of the hero requires money and gems. To make it easier for you, we suggest downloading Caves Roguelike Mod APK. After entering the game, load the save available there and get a thousand coins and diamonds to your account. In addition, we removed banner ads from the game so that nothing could distract you from the gameplay.

There are many types of weapons in the Caves Roguelike. Cold (knives, forks, swords), as well as shooting and throwing. All weapons are subdivided into elemental and simple. Elemental is a weapon that imposes negative indicators on the enemy. For example, arson or poisoning. Rifle does physical damage. The stronger it is the better for you. 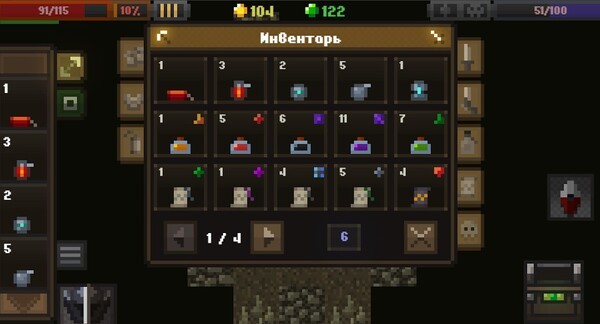 Players can also use super powers:

Loot drops from enemies and chests (you can find loot using a random teleport potion). Loot includes potions that you can use on yourself or an opponent. Its effect is unknown until first used in a race. The same goes for scrolls. There are also various artifacts that change characteristics, such as bombs, slug bait, armor, firearms, supplies for them and materials for crafting.

Caves Roguelike is a fun game with many possibilities. Each game session brings something new, so the project has been a success for a long time.