Chicken Gun is a fast-paced and fun action game centered on a showdown between roosters in a chicken coop. Plunge into the dynamic process of shootouts between warlike birds and do everything to preserve their existence and at the same time destroy as many rival roosters as possible. Start playing in “every man for himself” or 5v5 mode. Try to master the simple controls with the joystick and get used to the mechanics and dynamics. Grab the weapons lying on the map in the form of rifles, grenade launchers, bazookas, machine guns and pistols. Shoot at enemy birds and quickly hide behind obstacles so that enemy shells do not hit your ward. Run and grab coins, ammo and armor modifiers, damage boosters, first aid kits and other useful boosters. For shooter lovers, we also recommend Crossy Road and Pocket Build.

Chicken Gun has been popular with users for several years and here are the main features of the project.

Perhaps the main feature of Chicken Gun is the ability to play in multiplayer mode. Get into 5v5 battles and learn local combat mechanics. Improve your abilities and develop them in team battles, acting well-coordinated and united. Each victory in battles brings a certain reward in form of game currency that helps buying anything you want. 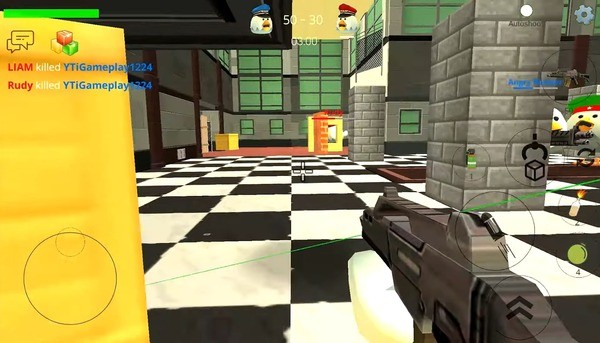 If you do not want to play in a team, then try the “One against all” mode, where you can set records for eliminating opponents. In this project, you must become an invincible player and subsequently get many positive emotions from this. Having fun with the characters in the form of chickens and roosters will cheer you up for a long time. Well-coordinated teamwork or methodically killing enemies in single-player mode will make the game even more interesting.

Use an extensive arsenal of weapons

Chicken Gun has many modes and maps for you to fight. The game has a huge amount of different weapons that you can use against your opponents. You can improve your character by buying new weapons and increasing his abilities. You can throw explosive eggs at the enemy, shoot from a machine gun and a bazooka and even use a laser machine gun or a smoke grenade. Everything for the victory! These coop wars are just endless. Pump your character, improving his characteristics. Do not forget to also change his uniform and get the best quality weapons.

In addition, Chicken Gun allows you to improve the cosmetic component of your character by changing his appearance. You can use tons of items in the game to make your character stand out from the rest. Here are some unusual graphics that you will definitely like. In addition, the game has very simple controls, which will not be difficult to figure out. Regular updates add a lot of new content. Make your character the unique and funniest, or, on the contrary, become a frightening warrior using a well-thought-out and high-quality customization system. 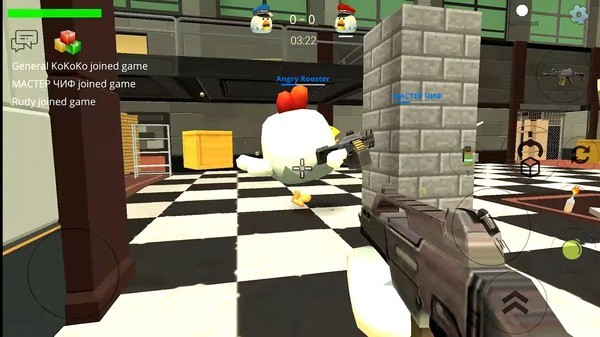 Chicken Gun uses high-quality 3D graphics in terms of the game’s locations. As for the characters themselves, they have a rather in a playful form and fancy costumes only add charm to them. The game has excellent sound, needed to detect enemies on the map and gives an additional atmosphere to the gameplay.

The game requires resources, which are often not enough. However, do not worry, because you can download Chicken Gun Mod APK, which offers a lot of money to solve all the user’s problems. In addition, we removed all ads from the application, allowing you to enjoy the gameplay of the project to the fullest.

Our team checked mod operation. Indeed, the mod works great on any type of device. All that is required from the user is only to download and install the presented version of the project on smartphone. Otherwise, there are no complaints about the utility, including in terms of security – the game does not contain viruses or any other malware. 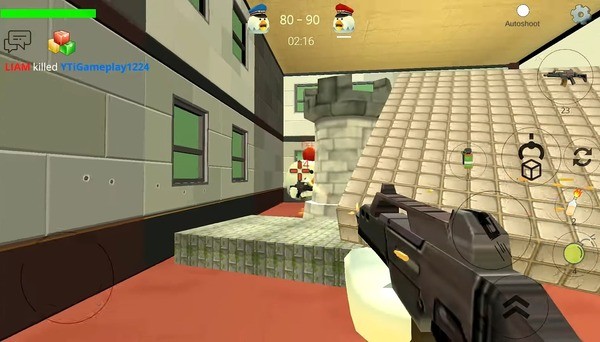 Earn coins for destroying enemy units in Chicken Gun and for successful encounters and victories. Spend the money you earn on strengthening your rooster, which is also a great help for unlimited money mod, which gives a large supply of coins. Try to enhance the striking power of different weapons, give the rooster funny costumes and hang on protective vests, put on helmets, boots and aprons. Fight on small, medium and huge maps and use all your power and dexterity. Take part in online battles and create a team of warlike birds controlled by professionals. Unlock previously inaccessible species of birds, unlock an arsenal of technological weapons and look for new tactical ways to eliminate the enemy. Update the game regularly and take part in online events with valuable prizes.

Chicken Gun is a fun shooter in which interaction with other team members plays a huge role. Despite the seeming simplicity at first glance, this is a deeply developed game where strategy comes to the fore. Interesting characters and the possibility of a joint adventure with friends will make you spend many hours here.