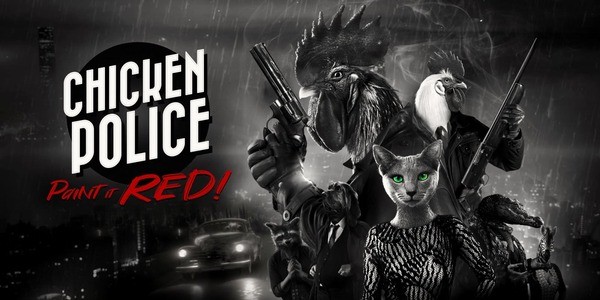 Chicken Police: Paint It Red is a point-and-click visual novel featuring anthropomorphic animals. Time did not spare the once best detectives Sonny Featherland and Marty McChicken, who served at the Cloville police station. For more than 10 years, department haven’t given them complicated and intricate cases, considering them worthless old people. However, the day came when the entire city police were powerless to unravel the mysterious and strange crime and had to turn to experienced comrades.

The feathered police officers are back in business and have to find hundreds of clues, interrogate dozens of characters, explore the city and meet with the shady tycoons, collecting confidential information and using it against them to achieve a result. The project has more than 30 locations to visit. Here is the cynical humor of the 40s combined with the atmosphere of the time, ruthless detectives, unexpected plot twists, search and collection of evidence and much more. Download other interesting projects such as Criminal Case and My Billionaire: Love Stories.

The game release on PC was at the end of 2020 and the next summer it reached the android platform.

Chicken Police: Paint It Red allows you to play as the feathered detective Sonny, who is about to retire. As usual, everything starts from the office, where a fragile girl, if you can call her that, is waiting for you. Since the world in which you are is unusual, all inhabitants appear in the form of a human body, while the head is from an animal. 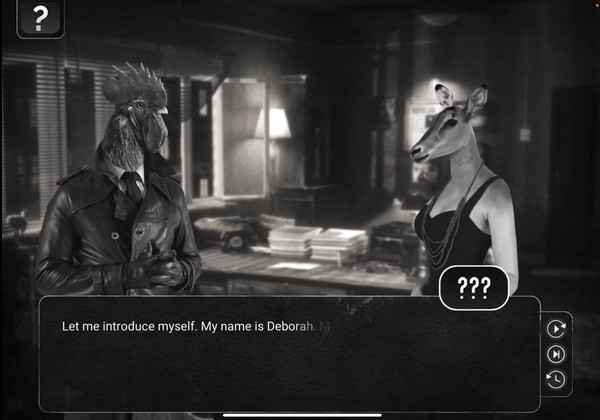 After we had to get down to business, you gradually begin to immerse yourself in this strange world of “Wildlife” and a city called Cloville. The creators of the game took the entourage of the 40s, added noir and jazz music. It turned out great. Especially when you hear how charismatic the characters are voiced. The voice of the protagonist simply amazes with its timbre, you can close your eyes and listen to how the characters communicate, just having fun.

Since Chicken Police: Paint It Red focuses on characters, it takes many dialogues to get to the end. When you click on the hero, you can use “look”, “speak” and “ask” functions. In special cases, a “question” is available (which is actually “interrogation”). Sometimes, conversation with a character is not available until Sonny examines him. If everything is obvious with the option “speak”, then when you select “ask”, a list of topics appears. There are both important plot and abstract ones. During the first playthrough, the function of skipping the dialogue is available, as well as its automatic reading and repetition.

In addition to scripted and not so much conversations, you can look into Featherland’s diary. He tirelessly writes notes about the case, information about the characters, explanations of the world and statistics.

Returning to the mechanics of Chicken Police: Paint It Red interrogations, we must say that this is the only kind of dialogue where you can feel the weight of the words spoken. Every careless phrase brings the police officer closer to failure. To avoid this, you need to monitor the key impression made by the interviewee and use the data about the characters from the notes. It is possible to understand whether the interrogation is progressing successfully by “detective measure” – a scale divided into negative and positive poles.

The scheme is roughly the same in the investigation mechanics. You need to match someone’s personality, subject, and clue to arrive at the conclusion necessary to advance further. However, if the match is incorrect, the game immediately indicates an error. When, finally, the scheme in front of the detective is ready, Santino will offer a list of conclusions, where only one is correct. 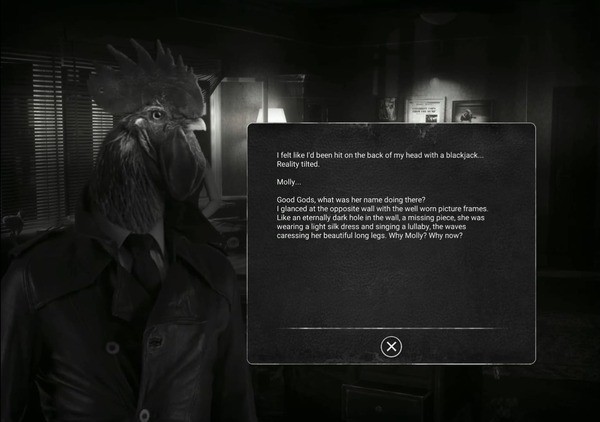 The characters are perfectly combined with the selected species of animals. Two partners, always running into trouble and striving to get into a fight are typical roosters. Cunning gangster, skillfully manipulating the state of affairs – a mean rat. Fatal beauty who keeps secrets and acts in her own interests is a wayward cat. Always busy secretary who works until night and helps in any situation – a tireless hummingbird and so on. Each is unique and charismatic in its own way, so you won’t be able to confuse one with the other.

Humanoid animals inhabit the world of Chicken Police: Paint it Red. The way the creators portray them causes both delight and bewilderment at the same time. The characters are even more interesting to look at than the locations. They change posture and make movements depending on the context of speech. It is worth warning the players in advance that some of the female characters sometimes appear before us in a half-naked form.

As noted above, Chicken Police: Paint It Red is a very atmospheric game. Creating a cinematic noir, the development team was not afraid to take a rather risky step, depleting the palette as much as possible. At the same time, there is a bright color spot in many scenes. For example, scarlet blood or malachite eyes of the main character, enriching the scene. 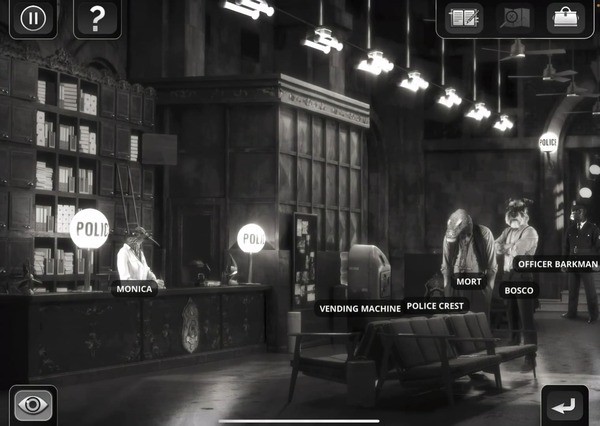 There is a soundtrack of 20 songs with a separate one for the most important scenes of the game. The developers from The Wild Gentlemen once again demonstrate how sound design and music create the lion’s share of the atmosphere and mood.

Chicken Police: Paint It Red costs almost $10on Play Market. To avoid such expenses, you can download the game free. We also offer you to download the game in one file without a separate installation of the cache. Such an approach allows you to avoid any problems with installing.

Chicken Police: Paint it Red is a quest with minimal interaction and surrounding static scenery. It features huge amount of interaction with characters inhabiting the world. While investigating the case, you have to move around the locations, conduct dialogues with characters, build logical chains, solve riddles and arrange interrogations. A complete set of aspiring detectives! 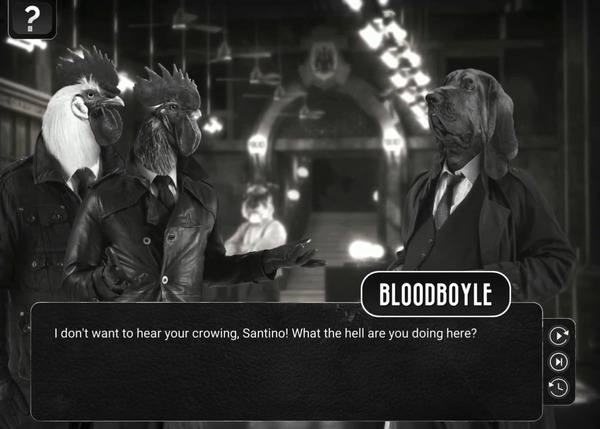 There are not many interrogations, but each of them is a difficult test for the detective, since each character has a unique character. Use special approach in order not to fail the interrogation (and this is very easy to do).

By asking the right and not so good questions, you have the interrogated towards yourself or, conversely, repulse, as indicated by attitude scale in detective’s notebook. Interrogation is interesting activity, which is a feature of the game. The gameplay does not get boring and charges for repeated passage to open all the achievements.

Chicken Police: Paint it Red is a unique project in its own way, made by true fans of the noir genre, so all its connoisseurs will like it. If you value games for the atmosphere, as well as fascinating stories, then be sure to pay attention to this project.

How to install Chicken Police: Paint it Red Mod?