City Island 5 is a city building simulation game in which you have to rebuild and develop your own city while solving various problems along the way. The developers have given you the opportunity to feel like the mayor of a small town located on an island. Face with the difficult task of building an entire metropolis out of a small settlement. At the same time, City Island 5 presents a non-standard model with an ever-expanding city. Here you can explore nearby islands and join them to your own territory. Among other simulators, our team recommends paying attention to My Restaurant Empire and Dragon City.

Embark on an exciting expedition

The developers have worked hard to make City Island 5 stand out from other city-building simulators. Unlike other similar games, here you have a clear limit to expand your own territories on one island. However, you can also send your own airships on expeditions. The success of your territorial expansion depends on the outcome of these exploration missions. During your expeditions, you can find other islands that can become the backbone of your metropolis. You can build new cities on these islands. At the same time, having built communications between cities, it is possible combine them all into one huge metropolis on several islands. The world has never seen such cities – build the first one! 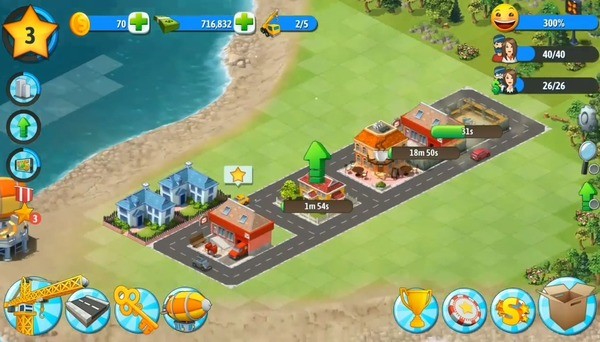 Enjoy a wide variety of island

The territories that you have to inhabit are quite different from each other. City Island 5 features sandy islands with lowlands, long and comfortable coves and beautiful sea views. Such islands are best suited for creating tourist centers with an emphasis on beach holidays. The game has islands with a plateau in the center surrounded by sheer cliffs. Local waterfall can amaze anyone with its height and beauty. Here you can clearly arrange farms and provide residents with a cozy and wonderful place to live. An island with an active volcano is also present – invite huge crowds of tourists to see the lava pouring out of the vent. There are both regular mountain islands with a climate similar to the savannah. You can even open snowy and evergreen islands and many other combinations of climate and landscape.

Create the city of your dreams

City Island 5 developers have done a great job trying to provide players with as diverse a set of buildings as possible to build. There are several hundred buildings available in the game, which open as you develop as mayor. You start with a small village, gradually developing it more and more. Over time, you can construct new buildings and grow your settlement in size, capturing more and more islands. At the same time, the game has a lot of other diverse content, as well as tasks that can drag you in for hours. You can also visit the cities of your neighbors and your friends to see who has achieved what. 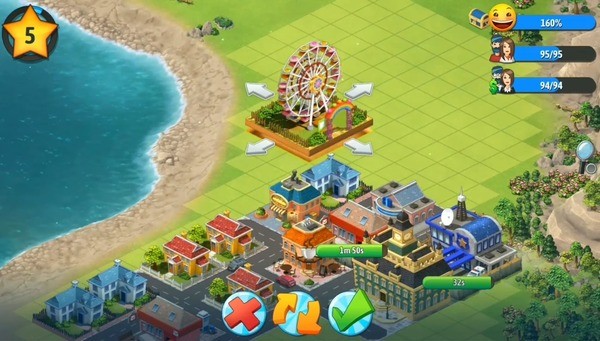 The graphical part of City Island 5 pleasantly surprises with the amount of attention that the developers paid to the elaboration and detailing. Here you can find beautiful surface textures, detailed painted buildings and beautifully animated characters and objects. The music is also top notch – it helps you immerse yourself in the gameplay without unnecessary irritations. A pleasant and user-friendly interface cannot cause any negative emotions. In-game sounds help you focus your attention on what is happening on the screen without getting too annoying or crawling into the foreground.

City Island 5 has a huge amount of content available to all players without exception. However, you have to spend a huge amount of time developing buildings and objects to unlock it. At the same time, some content is available only to people who have paid real money to the game and bought special currency. Not everyone is ready to spend real money or a lot of time for the game progress. However, we can help you with this problem by providing the opportunity to download unlimited money mod for City Island 5.

We confirm the functionality of unlimited money features. When you want to build or improve something, you need a certain amount of coins for this action. Our mod allows you to construct everything you want without decreasing your money balance. You can buy whatever you want for free. Simply install it on your device in a few simple steps to take advantage of all mod features. 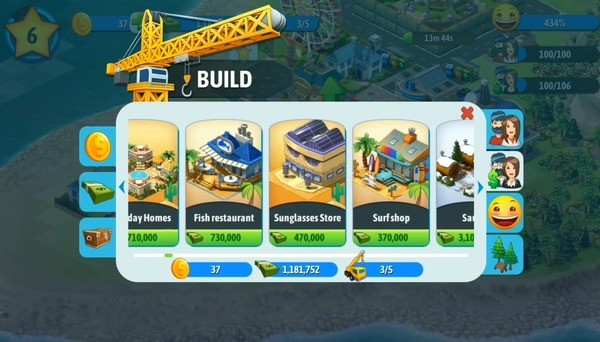 City Island 5 gameplay reminds a standard city-building simulator with some varied mechanics like discovering and building islands. Otherwise, you still have to discover, build and improve buildings, keeping an eye on the moods and needs of your residents, as well as their constant growth.

City Island 5 is a great example of a stable and enjoyable city-building simulator that most users can appreciate. At the same time, the game has various innovations to delight both old players and newcomers of the genre with its novelty.

How to install City Island 5 Mod?

Don’t forget to delete the original version of City Island 5 before installing our modified version to prevent errors during installation process.