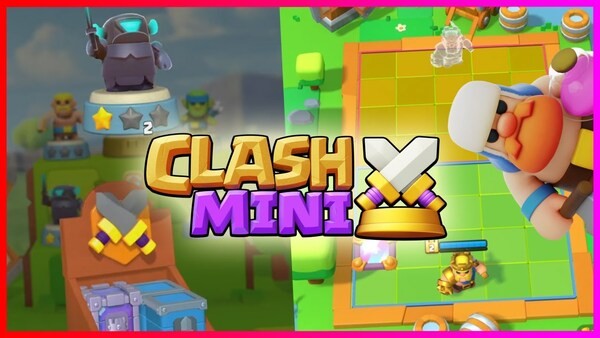 Create armies and place them on the battlefields in Clash Mini, watching as you destroy enemy units because of competent tactics of alternating strikes, using the unique skills of each fighter and anticipating the actions of the opponent. Castling, swapping warriors right during the battle, stumping the enemy with your original, strategic moves. Improve abilities of various heroes in the middle of an exciting and colorful battle, introducing unexpected combinations and confusing the opponent. The queen of archers, the king of barbarians, the maiden of the shield – these are only a small part of the available characters who are ready to engage in mortal combat for you and cast powerful skills to destroy the enemy. Several game modes, such as 1v1 or against seven other players, will give you a lot of fun, showing your experience of collective battles. Also, rotate the camera, looking at special attacks from different angles and enjoying the traced 30 movements, throwing another character into the attack. Download other strategies as well, such as Modern Age 2 and Realm Defense.

Clash Mini is a game from renowned developers Supercell. Let’s find out what this team created this time.

Lots of combinations and endless possibilities

Try to predict the actions of the enemy by placing your army in advantageous positions. You can come up with your own battle strategy using tank characters, archers, melee warriors and more. Do not forget to improve the mini-warriors during the battle, activating powerful abilities.

Each Clash Mini battle will be extremely intense, but short-lived – one game session lasts up to 5 minutes. In addition, you can rotate the camera during the battle, looking at the volumetric elaborated characters from different angles. This will be useful if you want to progress through the leagues, making your way to the Top 1000 in the world rankings.

In addition to famous heroes from the Clash universe, you can recruit completely different characters into your army. Complete tasks, open chests, get interesting heroes and improve them, unlocking new characteristics and abilities. So that the enemies understand that you are an experienced fighter, you can customize miniature fighters with unique skins. They transform the character, making him stand out more.

Clash Mini features three-dimensional graphics. Developers created the project in the setting of the middle Ages, but with the addition of various mechanics. You will also be able to meet familiar characters in this cult game universe and cheerful music will send the player into a festive atmosphere.

Battles with other users are always interesting and exciting, but winning them without donation can be extremely difficult. To ensure that all players are in approximately equal conditions, we offer you to download Clash Mini mod. It will transfer the player to a private server, and the user will receive an unlimited amount of in-game currency.

Clash Mini – endless battles now in not only villages and arenas, but also on tables in the format of the Clash board game. Players have to surpass each other in cunning and tactics using miniatures. Thanks to them, the game got its name. Here players need to arrange miniatures at the same time. When the deployment is complete, the miniatures will start fighting automatically. It’s an affordable and light-hearted strategy.

Collect, summon and upgrade your mini-army for future thrilling real-time automatic battles. Predict your opponent’s moves, make a winning strategy and win! Do everything so that your mini-warriors remain the last survivors on the map. The brave heroes of the Clash universe – the Barbarian King and more – can join your fighting and very pretty squad. Combine wizards, archers, heavyweights and other soldiers to change the course of the battle and outplay your opponent. Swap the places of your mini-warriors on the board, swap characters and come up with strategies and win one-on-one combat or in a competition with seven other players. This game is easy to understand, but hard to master – get ready for ordeals on the road to glory!

Clash Mini is a new promising project from the creators of cult games. If you love this game universe, then you have no right to skip this application by yourself.