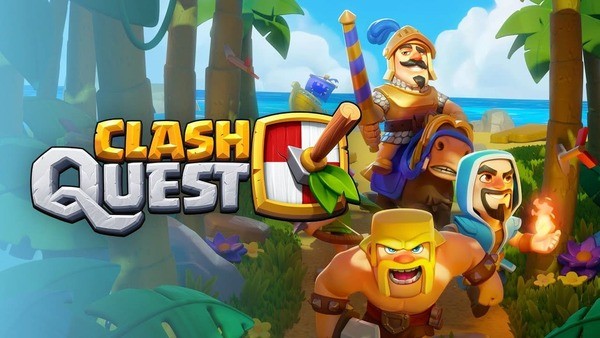 Clash Quest is a turn-based strategy game with match-3 elements from Supercell. Several years ago, developers made a big splash with the release of legendary Clash of Clans, Clash Royale, Brawl Stars and Boom Beach. The studio’s new project promises to be no less successful. Its goal is to attack fortified structures without losing all the soldiers below. Otherwise, you will lose. As in any other similar game, it is necessary to collect the same heroes in a row in order to inflict as much damage on the opponent as possible. Therefore, effect of their impact can be much more significant than if you used them one at a time. Go to conquer the islands, moving forward. You have to consider tactics carefully, because you need to fight not only with various opponents, but also with huge bosses.

Clash Quest saw the world at the end of March 2021. Literally in a week, the project collected 50 thousand downloads and gained 4.6 rating on Play Market.

You can unlock new warriors by moving through the archipelago. This can make your army stronger. It is enough just to explore the archipelago, where you will receive new troops as a reward for conducting battles. Developers also added various items for your army. For example, Prince has an item that allows him to deal area damage. Initially, the game may show very simple in terms of gameplay, but all its features will arise as you progress. In addition to basic techniques, characters also have passive abilities. There are many units from Clash of Clans, but this time all of them are qualitatively redrawn. In addition, creators added new characters. 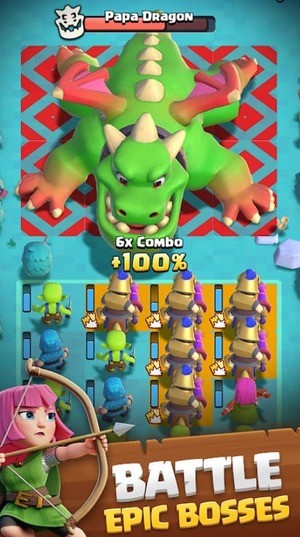 Clash Quest has a feature in form of boss’s variety. Only one boss resides in the Lair of Dragons in legendary Clash of Clans. The developers decided to fix this moment, so here you can fight the Goblin King, the Lava Golem and many others. Remember that each leader has its own strengths and weaknesses, so be wary of strengths and look for weaknesses. Strike with precision and receive epic rewards for defeating the boss.

Correct tactics is the key to victory

Combine identical troops to increase their level and make them even stronger. Increase damage by correctly collecting the same types of troops in a row. Do not forget that it is better to place ranged units behind melee infantry, because they are very vulnerable. Think ahead of time to defeat dangerous enemies on the battlefield, as they are all different. Each of these requires own strategy, so think carefully about the placement of troops for maximum damage. Try to avoid enemy shots from ranged weapons, direct your army to destroy them first, while your knight restrains the onslaught of enemy army.

Equip and upgrade your heroes

In addition to special skills, units have slots for weapons and armor. Now you can equip your favorite heroes by giving them powerful items. You can add weapons or clothing to increase abilities and improve maximum damage. In general, you can do without this, but the game becomes even easier with help of additional improvement. 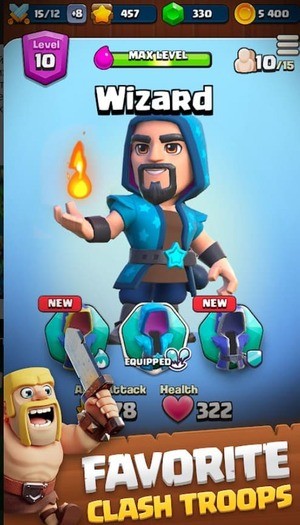 The graphics in Clash Quest have corporate, somewhat caricatured style, easily recognizable by fans of Supercell creations. Although the game has many units from previous studio projects, developers thoroughly reworked all of them to make them look completely different, although recognizable. In addition, the application has extremely simple controls.

In order to practice your skills in this new game, take advantage of Clash Quest mod, which allows you to play on a private server. Get unlimited gems and energy with lots of fun.

Our team can confirm the functionality of Clash Quest mod. By installing the proposed version of the game, you can get access to a private server with unlimited number of diamonds and energy. Note that while the game is in the beta test, you may observe serious problems while operating our solution. Nevertheless, we promise to fix all difficulties after the official release. One of the important components is energy. If there is no energy, you will not be able to participate in battles. Energy restores for a long time – one unit in one hour. 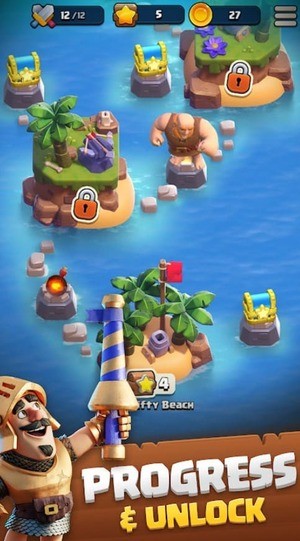 Unlock various characters and make an invincible squad. The higher the level of your fighter, the stronger his special abilities or other skills. The legendary character has special effects, which are very difficult to resist. However, if you get used to and learn all the abilities of the heroes, you can interrupt a powerful legendary attack with ordinary cards.

The controls in Clash Quest are extremely simple. Drag and drop units from the list of available ones right on the battlefield. Controlling your army is very simple, just with ordinary swipes. Choose any place on the map and transfer characters to it. Some heroes have special abilities before entering the arena or directly already in battle. Use them, competently sending to the enemy or a pre-selected location for the most successful attack or defense. Scroll through the menu in the application itself and navigate the store’s tabs and other options.

Clash Quest has tremendous potential and may well repeat the success of its predecessors. The game has very simple but addicting gameplay, many bosses, logic tasks and characters familiar from the studio’s past projects. Familiarize yourself with the application in question by downloading it with private server mod.