Conquer the Tower: Takeover is an entertaining simulator with strategy elements where players can plunge into the world of conquest. The battles here take place in a completely different way, as you can imagine. Get your own army, but you will not be able to see your weapons and even military equipment. You have to fight for every building in the city, but you will not hear any shots during the duel. The fact is that everything in this game comes down to strategy and logic. Visualization of battles is in the background. Direct army on schematic layouts of locations with numerous that you need to capture. Take the first object and make it your starting point. Choose the next building and send your forces to it. Remember that the enemy can also choose the same building. Then you have to join the fight to take it. We also recommend downloading Stick Army: World War Strategy and Smashing Four. Conquer the Tower: Takeover will make users think and use their brains. If you like it, then we recommend you to familiarize yourself with the application more thoroughly.

Conquer as many towers as possible

Manage your army in Conquer the Tower: Takeover with swipes. Swipe your finger across the screen from one building to another and watch how the path to the object paints over with your color. Moreover, models of little men representing the user’s soldiers will run along the filled path. Try to understand all the rules of this project as soon as possible and start coming up with a variety of tactics. It should will allow you to gain an advantage and win back as many buildings as possible. The victory depends on the number of buildings that will be at your disposal. The one who can win more objects will become the winner at the end of the duel!

Upgrade your army to crush your opponents

Each time you level up, Conquer the Tower: Takeover offers to upgrade your tower. The best pumping option is a balanced improvement of all the parameters of the object. That is, you need to get ahead of the enemy in the matter of pumping your towers, because the enemy also does not intend to sit out. If you do not keep the balance and leveling speed, then your warriors will still not be able to defend a completely unfortified structure. The same applies to strengthening the tower itself. It will be even more difficult for weak warriors to keep it from capture.

Tactics and strategy are the key to success

As you progress through the stages, your opponents’ strength increases. It will be much more difficult to defeat them. Soon you will have to consider various factors seriously before each battle in order to win. Sometimes you to throw all your strength immediately into capturing a certain tower. If the situation is initially not in your favor, then it is better to save up your strength first, and only then go on the attack. 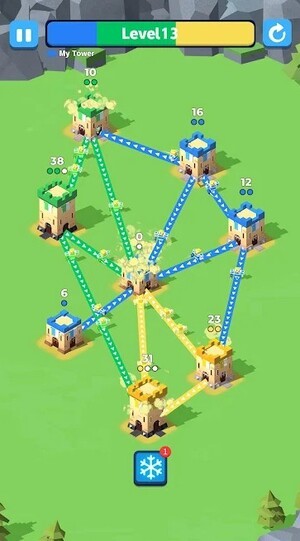 The entire gameplay of Conquer the Tower: Takeover consists of different levels. Each level has its own division into the number of battles. You need to go through all the battles of the level in order to move to a new one and so on until the end of the gameplay. The end will not be soon thanks to the constant updates of game content. Find all completed levels on a special map and if you want to replay any of the stages, you can simply open the map and start the old level.

Graphics in Conquer the Tower: Takeover is of secondary importance, as main thing here is the fights and battles. An undemanding picture allows you to run this game on any device.

We recommend you to download a mod that will give you unlimited money. Install the cache along with APK file to make the mod work well.

You will find more than five hundred levels in Conquer the Tower: Takeover. However, even the first levels are not as easy as it might seem. It is also worth thinking about them, so as not to be mistaken with arrangement of towers and direction of main character. The period for reflection is very short, as enemies arrive at this time from all possible paths. You are obliged to make very quick, but competent decisions to keep the victory over the opponent. 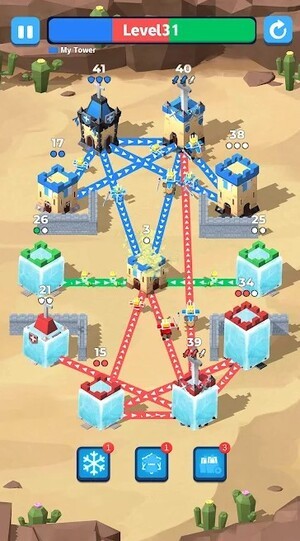 The developers have worked hard to balance the power of the gamer with the enemies. At times, strong opponents will come to the battlefield, not taking your damage for the first few seconds. Spend this time upgrading your own towers so that you can attack the enemy when possible.

Conquer the Tower: Takeover is a great option for fans of strategies, arcades and tower defense. The game allows you to have a pleasant and fun free time defending your towers and capturing strangers.