Counter Attack is an online game from the Bulgarian developers Seven Bulls Games. The game offers battles on the streets of different climatic regions of the planet. Terrorists and law enforcement are fighting in multiplayer mode. The whole gameplay is battles on certain maps selected by the player. Every battle contains certain tasks, which completion can bring player a reward. You can practice and hone the skills of character control, firing in battle against characters controlled by game artificial intelligence. The maximum number of players in one location: ten people. If you have played Counter Strike before, then this project will remind you of it a lot. If you love shooters, you can download 1v1.LOL and Thetan Arena.

Counter Attack gameplay has attracted an incredible number of people. Many speculate that this project could be a great field for esports. The game now has more than 10 million downloads.

Be prepared for the fact that you will constantly need to participate in competitions. It does not matter, anyone can come under fire with a friend or an enemy. Now, the game has three modes: defusing a bomb, playing with weapons, fighting to the death. One team will have to defend the points, the other – to plant bombs on them in first Counter Attack mode. The winner will be the one with the most defeated rounds. In the second mode, you need to fight with other players who appear in different places on the map. The winner is the one with the most kills. Each kill will bring you a new weapon in the latter mode. It will be much more difficult to kill each time. As a result, you have to defend yourself with a knife. Each Counter Attack mode is interesting in its own way and unique. There you can try various types of weapons and think over battle tactics in practice.

Complete tasks and get colorful skins

You can also complete certain tasks in Counter Attack, which are available in the main menu. Every day you can complete certain missions. Every successful completion brings you keys, cases and experience. Usually these tasks consist of a certain number of kills, defusing bombs, taking a place in battle and more. The donation system is quite well developed here. The game will ask you to say goodbye to your money constantly. Here you can find great chests that contain skins for weapons.

Skins are a kind of outer shell for an item. Each has a certain degree of rarity. The higher this value, the more expensive the skin itself. The most interesting and at the same time funny thing is that the weapon will not become stronger from presence. It will only be a very nice addition to it.

Choose among the most advanced weapons

Counter Attack user can equip and arm their hero in different ways. The shooter has cold, firearms. Note that different types of firearms have different external parameters, penetrating power, recoil force, different ammunition volume and reload time. There are more than 90 skins for personalizing weapons. 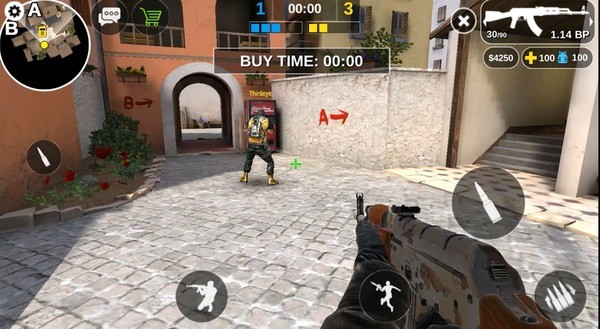 The player needs to be able to navigate the range of weapons. This makes the game much more effective. You can equip your hero with a knife (Bayonette, Butterfly, etc.), a pistol (Desert Eagle, Glock, Tec-9, etc.), a shotgun, a submachine gun (P90, Mac 10, etc.), a sniper rifle, an assault rifle ( SG556, AK47, others). In addition, the ammunition supply includes explosives and grenades.

Counter Attack, offers magnificent high-quality 3D graphics and realistic sounds. In general, there is everything for high-quality immersion in the gameplay.

Our mod allows you to get more money when killing opponents. Note! This mod does not work in multiplayer!

The gameplay in this application is practically no different from the standard one. You have to decide on the regime, assemble a team and then go to war.

Various types of rewards accompany leveling up characters in Counter Attack. There are daily login rewards, missions and milestones. Today, players have access to several different maps for battles. Further, they plan to increase their number where can you fight battles: 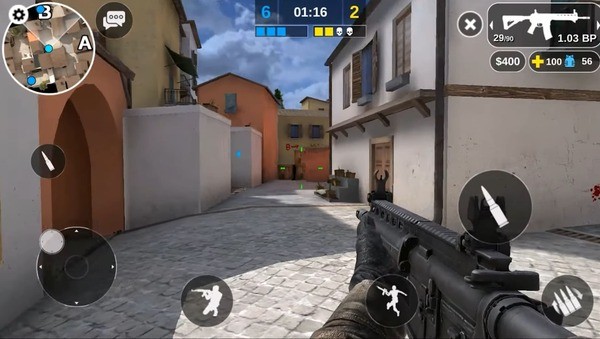 The first-person gameplay comes down to individual battles in the modes selected by the player. During the battles, the main goal is to kill as many opponents as possible. In parallel, the player performs the received tasks of a local nature. Single playthrough is perfect for beginners. You can acquire useful skills to control the hero in a battle with characters led by game artificial intelligence. Master the mechanics and combat tactics. Two teams of five people each can play on one map.

Equip and dress the character in different ways. Firearms are different in external parameters, like penetrating power, recoil force, ammunition volume and reload time. There is a collection of skins in almost a hundred models to change the appearance.

Counter Attack is a quality shooter on a mobile display. The mechanics and style are similar to the classic Counter-Strike. The graphic design is impressive, as is the elaborate soundtrack.