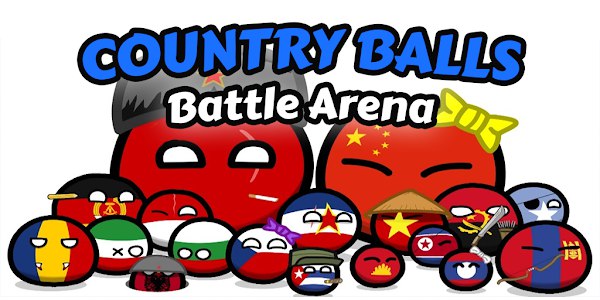 Country Balls Io: Battle Arena is a strategy from the developers of MAD PIXEL. You have to manage different countries represented on the battlefield as a circle with eyes, painted in the national flag of a certain state. Choose your country and go on the attack. Participate in various historical events such as wars and various other conflicts between countries. Try to overwhelm the enemy with numbers. Upgrade your countries and become only stronger to make it easier for yourself in military matters and achieve victory much faster. However, remember that your opponents will also become stronger each time. Try not to lose this arms race in order to remain the power. If you like this idea, then download Dictators: No Peace.

Read our review if you want to know the details about the game.

The essence of Country Balls Io: Battle Arena is quite simple. You and your opponent spawn on the map with one territory and several soldiers under control. There are also many neutral pieces of land around you. The size of army slowly increases and you need to state your claims to neutral territories by capturing them. The opponent will do the same. Eventually you will run into each other. Here, the participant who has more soldiers in stock will win. It is important to correctly distribute your troops, because you can send excessively large forces to one of the lands and thus completely expose the rear. Subsequently, there will be locations with two or more enemies. Here it is necessary to show even more tactical training, because every soldier counts.

Playing Country Balls Io: Battle Arena would be boring if the app did not have a leveling system. Therefore, the developers decided to implement it. Use coins to improve some aspects of the state, making it more powerful. Therefore, you can increase the starting number of your army, as well as the growth of troops per second. These are very important values, because in battle it is very important to start your campaign successfully, since half of the success of the entire campaign depends on it. All upgrades will require gold coins from you. Mine them directly on the battlefield. The difficulty of the levels increases gradually, so use your money wisely and invest it wisely.

To start with, Country Balls Io: Battle Arena has quite a few countries that you can play. These are large states, like the USA, Germany, China, France, as well as military blocs (NATO) and fictitious formations. For example, you can perform under the flag of a non-existent country. It is possible to choose a headdress for each circle that symbolizes the country. This is a Santa Claus hat, a magician’s cap and much more. In addition, you can select the lower part of the character, making his circle smiling or, on the contrary, harsh. All of these skins also cost money. By the way, you can unlock those countries for money that are not initially available in the list of states.

Country Balls Io: Battle Arena has rather ordinary graphics made in bright colors. You will be able to watch the battlefield from above, so you can keep a close eye on everything that happens on the screen.

Country Balls Io: Battle Arena is an exciting arcade strategy game in which different battle balls act as soldiers and vehicles. The game takes fans of the strategic direction into fierce battles and offers to plunge into revolutionary battles between different states. Original rounded characters play the role of fighters and guns with own unique parameters and abilities.

Take part in advanced tactical phase with turn-based issuance of orders, as well as many arcade battles, horizontal tests, cool puzzles to defeat an opponent. You will be pleased with the many story missions of the campaign individual for each side of the conflict. There are tons of solo battles and challenges, many loyalty gifts, prizes of various rarities, and plenty of new content to unlock.

Control the balls in the battle against different opponents, capture territories and increase your combat power. Get new cards of balls and cannons as a reward and attack the lines of a heavily fortified computer enemy. Use various tactical tricks and deceptive maneuvers. Enjoy the fun style of decoration, different maps, units, improvements and regular updates from developers!

Country Balls Io: Battle Arena is an interesting game that allows you to show your tactical skills and strategic thinking. If you love strategy, then this app is for you.