Crab War is an action-adventure game from the creators of Appxplore (iCandy). Huge creatures came to the territory where the crabs lived and then they had to leave. After gathering strength, they are ready to give a serious rebuff to the invaders. Summon numerous crabs during the battle. In addition, make your wards evolve, for this, upgrade new features. Unlock unique mutations, use especially strong crabs in battle and fight in intense battles against bosses. Get ready for an exciting war that will break out on the screen of your android device. We also recommend downloading Slime Labs 2 and Diggy’s Adventure.

Control an army of crabs in an addictive Crab War. 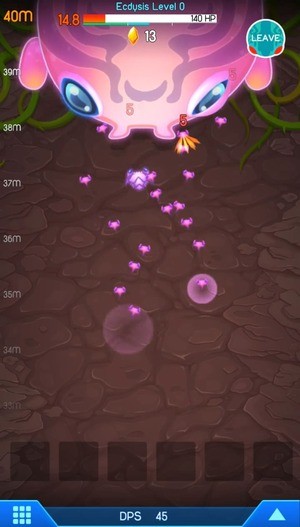 Huge reptiles, octopuses and many other water monsters decided to take over the entire area. All the crabs had to leave to live in the dungeon, but since they could not hold out there for a long time, they decided that they would go back to their homeland to destroy evil enemies. Manage crabs, do everything possible so that your opponents either die or simply leave the place of residence of real residents. Gather the energy of crystals and earn enough cash that will allow you to upgrade the genes of your crabs and become invincible! You will be able to fight not only with enemies, but also with other players for leadership and territory. Create your extraordinary style of the mighty king of crabs and conquer the world again! In terms of mechanics, the game is somewhat reminiscent of a regular clicker. Each crab can be pumped.

Crab War game screen consists of two parts: your warriors are located at the bottom with enemy at the top. As soon as your crabs reach enemy lines, they will explode, dealing damage to the enemy. To win the battle you have to defeat five dozen enemies. Appearing on the battlefield in turn, they make you sweat. Upgrade your army, create up to 33 queens to lead your charges, unlock powerful abilities and modify them by activating various talents. Shed and be reborn, acquiring new mutations and talents along with them.

Pump up the crabs

Be aware that crabs can molt and mutate. In this case, they acquire incredible strength and new abilities! Your main task is to deal with the dangerous Wild Beast. By killing him, you get shiny rewards! You also have the opportunity to improve crabs, improving their skills. Use 6 skills and 18 talents. Also, do not forget about the possibilities of the golden beam, which instantly hits opponents. If things don’t go well at the front, use the help of a killer crab. Help the crabs restore justice and return to their native territories! 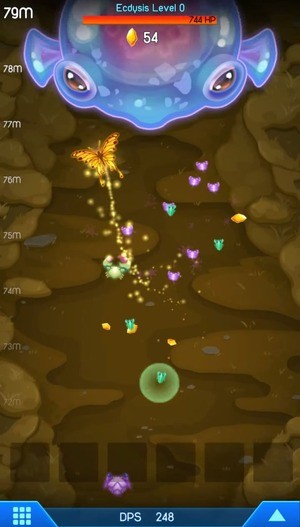 The graphics in Crab War are very attractive and please the eyes of each of the players. You will be pleased with the bright style of characters and colorful environment around. Such an approach makes the gameplay many times cooler! The special effects are at a good level and deliver emotions for a long time.

Money in Crab War are extremely important. They will help your army develop and achieve success on the battlefields. To make it easier for you, download a mod that allows you to increase the number of coins when spending.

Crab War is an arcade strategy that allows gamers to take part in a large-scale war. Battle adventures of varying degrees of complexity and dynamism are available in the collection of each user. Experience gained in other military stories will definitely come in handy. Although one can hardly hope for ease of victory in the new game dedicated to the war of crabs. 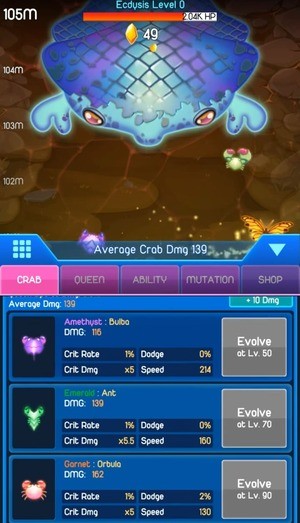 Participants have to go through many difficult levels that require unsurpassed abilities of a strategist and tactician. An unusual army, which includes more than eighty different types of crabs, also requires a special approach. It will be interesting to command such an army. The game is a fascinating story, implemented in bright graphics, which sends the gamer into a fantasy world. It is full of dangers and various evil spirits. There are fifty species of reptiles in this game alone, not to mention octopuses, dinosaurs and other creepy inhabitants of dark caves.

Lead the army to join the fight with these opponents in order to return the unfairly taken territories to the crabs. Having mastered the power of magic crystals, having undergone mutations, crabs will fight to free the Earth from terrible reptiles. This heroic story combined with a variety of locations will help fans of military adventures to get new impressions. Crab War provides the opportunity to increase army by obtaining additional resources that provide a lot of money.

Fighting Wild Beasts, mutations that turn unremarkable individuals into strong and invulnerable warriors, fierce battles and help of allies – the game is designed for leaders hungry for glory.