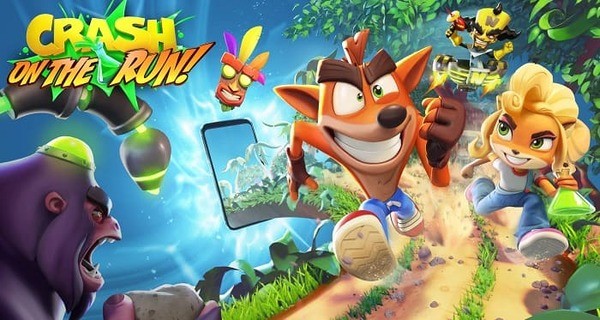 Crash Bandicoot: On the Run! is an exciting new runner featuring Crash Bandicoot, a legendary hero from the 90s. You are going to take part in a race with dangerous obstacles and traps. Move the character between three tracks, jump and perform special movements to overcome obstacles. Along the way, you must destroy various henchmen of the villain. The received rewards help to purchase improvements and increase defense of the hero’s team. Crash runs forward and destroys crates while collecting apples – just like in the good old days! Download other cool runners, for example, Tomb of the Mask and Imposter Fight 3D.

The adventures of the bandicoot Crash are known to gamers from all over the world. What made the new part of the franchise happy? Read on to find out.

Save the universe with Crash and his sister Coco

The main character is Crash Bandicoot and his main task is to fight the aliens. Enemies are constantly attacking the ground, so the character seeks to disarm them and send back to their dimension. His sister, Koko, helps him in such a difficult task. With help of computer technology, she learns about anomalies and notifies Crash. Crash Bandicoot: On the Run! filled with different levels, ability to earn points and many other highlights. 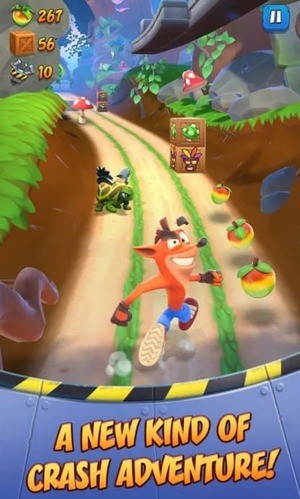 Crash and Coco Bandicoots race along the famous three-line treadmill. Now it is not an endless movement to nowhere. Heroes gather resources, dashingly break boxes, jump, dodge traps, brush off small opponents and fight villains, led by Dr. Neo Cortex and their minions. The well-designed levels have two or three tiers with own little secrets. We found self-repetitions, but there are no tracks collected from worn-out pieces. No automatic generation or constant repetitions.

The gameplay of Crash Bandicoot: On the Run! Is straightforward. You have to run forward and along the way to cope with various obstacles and tasks. Your hero can jump over obstacles. This activity allows the character to jump over large rocks, various shooting mechanisms and even boxes. Moreover, Crash break the boxes. The character has special skills and assistants that can help him make a circular turn. When you run up to the box, you can break it using your trait.

As you run, will come across two types of boxes:

Develop a bandicoot base

Having collected resources, we settle down on the base, which clever and beautiful Coco Bandicoot has deployed on Wampa Island. Build and improve laboratories, perches and much more. Owners of virtual farms will be familiar with this. Only this farm does not produce food at all. Chickens hatch nitro, frosty and ash eggs, which go to Coco’s lab. There all products transform into serums, bombs, blasters and bazookas. Crash Bandicoot: On the Run! compares favorably with its competitors. Development of your own base, creation and modernization of production allows you to diversify the gameplay. The other side of such a hike is the need to return during the day to occupy the vacated production chains. Thanks to the quality work of artists, 3D modelers, animators and designers, the game looks bright and adequate to hardware capabilities of modern low-cost smartphones. The music is monotonous, and in general, the sound design is average.

We suggest you take advantage of Crash Bandicoot: On the Run mod with fully unlocked skins. In addition, you can activate immortality and high jumps to make it easier for you to complete the levels at any time during the adventure.

We confirm that by launching the application, you can use special mod menu in the upper left corner. You can enable immortality and high jumps in it. At any time during the game, you can turn off this mod and play normally. Well, all skins are unlocked by default. Enjoy unlocked gameplay with our solution for a more comfortable adventure.

The seemingly slow pace and simplicity of Crash Bandicoot: On the Run! are deceiving. As you progress, the difficulty increases. However, increase in complexity is not due to the increase in speed. New obstacles appear at new levels, so you need to find your own approach. The first encounter with them is never easy. Daily Challenges with good prizes can raise the difficulty even higher. You always run in company with Aku Aku – a good healer, once imprisoned in a voodoo mask. As with other parts of the franchise, he is capable of blocking one or two hits. The number of blocks depends on the number of collected masks. Having lost the support of Aku Aku, Crash can survive a collision only with a box or small enemy. However, repeated failure deprives the bandicoot of life. Serious obstacles are fatal right away. It is worth avoiding collisions with nitro boxes, blowing up on TNT or falling into the abyss.

The nice thing is that you don’t have to run forever. Each task has its own level completion point. Such an approach allows you to immerse yourself in the gaming atmosphere. Main hero has to collect apples in the process of running. They will be useful in the future for buying various parts. For example, there is not always enough energy for a run, so you can use special apples to buy flasks with energy and go on a journey.

Crash Bandicoot: On the Run! is a fun runner that continues glorious tradition of original PlayStation games. The game has every chance of achieving great success, and the first data on number of downloads and reviews only confirm this.

How to install Crash Bandicoot: On the Run Mod APK?