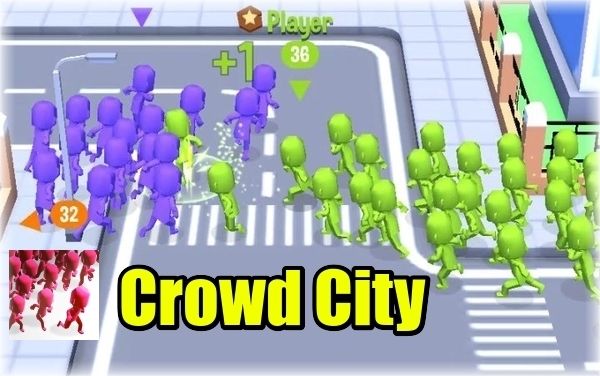 Crowd City is an online multiplayer game for the mobile platform in the “.io” genre. The essence of its gameplay is to destroy opponents. The player appears on the map of a metropolis with one character who must collect as many neutral people as possible into his crowd in a short period. There is a counter of current number of supporters for particular user in each round. The victory goes to the one who was able to collect as many neutral citizens as possible by the end of the round. However, you can always quickly “swallow” everyone else on the map, winning this way. Despite the extremely simple gameplay and uncomplicated graphics, the project is extremely exciting. Simple controls, convenient navigation and an intuitive task in each round made the gam in demand among fans of such a genre. For killing time, we also recommend Mr Ninja and Demolish!.

Compete with nine teams and defeat all

The action arena of Crowd City is a big metropolis. You start playing as one person, explore the city and recruit everyone to your team. At the same time, all the other nine players are doing the same. Your main task is to gather in your crowd as many people as possible in the allotted time. If you face another team on the narrow streets of the city, an epic battle will begin. Please, note, there can be only one winner. Paint all neutral white passers-by that meet close enough in your hero color, adding strength to the crowd. You can find other players by the corresponding colored arrows. However, you need to watch its numbers. If opponent crowd is larger, he can easily absorb you. Well, if you are stronger, start hunting.

Choose from a variety of fun skins

At the very beginning of Crowd City, there are several skins to choose. There are 15 of them in total. Standard little men simply differ from each other in different colors. Nevertheless, there are also a couple of funny ones in the form of large green snakes, in a tracksuit or Santa Claus. When one such person is running around the map, it does not really matter, but if you have a team of hundreds of people, then watching a huge crowd of snakes prowling around the city is quite funny.

Controlling a character in Crowd City is as easy as shelling pears – you just need to set the direction of movement of your hero using a swipe. After you command, the character starts happily go where you ordered and gather everyone he meets into the team. Carry out all the controls in the game with one button. This makes the game very convenient and at the same time unpretentious for gameplay.

Crowd City has the simplest graphics, but at the same time, you have a huge city at your disposal. Despite the uncomplicated design, the game can captivate almost any user. In addition, fun music will sound you during your adventures.

Each adventure in Crowd City lasts only two minutes, which is often too short to create a hilarious cataclysm. In addition, you may hesitate a little at the start of the game, and then not have time to break out into the leaders. We offer you unlimited time mod with which you can freeze the timer. Thus, you can have as much fun as you want.

We played Crowd City on our devices. Based on the test results, we can confirm the functionality of unlimited time mod. Moreover, the game has been repeatedly tested using antivirus software and is completely safe. After the game launch, find a round icon in the upper left corner and click on it to open menu. Move the slider to activate the freeze timer mode.

Crowd City does an excellent job of its key task – helping to pass the time. There is no exciting plot, thoughtful storytelling, or unique game solutions. Everything is simple and even primitive, but it works. Unpretentious graphics allow you to run the game even on weak devices. Intuitive controls make the app friendly in terms of gameplay, even for children.

Crowd City is a great solution for gamers who want to enjoy the gameplay without a complicated plot. High-quality graphics, simple controls and a multiplayer mode add special excitement to the game. This game can help you kill time and have fun at the same time.

How to install Crowd City Mod?

Don’t forget to delete the original version of Crowd City before installing our modified version to prevent errors during installation process.