Crowd Defense is a simple and fun app from the developers of Ketchapp. Your task here is to stand behind a machine gun or other powerful weapon and fire bursts of bullets at enemies who are going to storm your positions. Kill everyone from the minigun or send a huge bomb to the invaders. All means are good to defeat the enemy. The arsenal of weapons is quite extensive. You will unlock new guns as you progress through the levels. Destroy thousands of enemies defending the castle from invasion. Fight against huge bosses to prevent the enemy from seizing your territory. Unlock special weapons, such as a flamethrower or laser for more effective destruction of opponents. Also, download The Big Hit and The Superhero League.

Put your skills to the test in Crowd Defense. Check if you can reach the end and convince enemies not to even approach your domain.

Defend your base by destroying hundreds of enemies

The main character of Crowd Defense sits on the wall of the castle and holds machine gun in his hands. At this time, a crowd of little people is moving towards the castle, ready to demolish it and seize your land. You have 500 rounds at your disposal, so use them as efficiently as possible, shooting at enemies. Don’t let them reach the castle! When the bullets run out, it takes some time to reload the minigun. It is also possible to send very powerful bomb into the crowd. 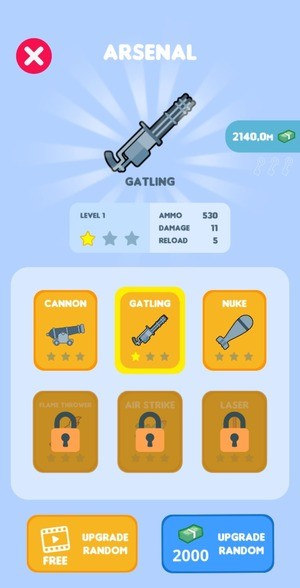 Your castle also has a certain amount of life energy. It is unlikely that it will be possible to shoot all enemies the first time, so one of them will probably get to the base and take a certain number of lives. The level is considered passed if your castle has not lost all 100% of HP. Subsequently, you can rebuild it with the help of special boosters.

To make Crowd Defense was more interesting, the developers have introduced several types of weapons into the project. At the start, you have access only to half of them: Cannon, Gatling and Nuke. Subsequently, you can open an air strike, which will allow you to call for fighters, as well as napalm and a laser. Each weapon is unique, so use it wisely. In addition, it is possible to improve the arsenal. Each upgrade costs money and each weapon has three upgrades. Thanks to them, you can increase the rate of fire and power, as well as clip size. If at first you can use only one bomb per round, then with pumping their number increases. The same situation is with other types of weapons.

Slowly walk from level in level Crowd Defense. Each of the locations provides players with different types of opponents. Sometimes, you may face cannon fodder that is easy to shoot. At later levels, cavalry will cover the army. Well, the climax of the battles will be skirmishes with bosses. Moreover, they are also of several types. First, you have to deal with the big stickman. His appearance is the same as that of the standard infantry, but he is several times larger. However, if you think that this is a dangerous enemy, then you are wrong. After all, a huge leader in metal armor awaits the player to go further. He is capable of surviving a direct bomb hit, so you have to work hard to kill him. 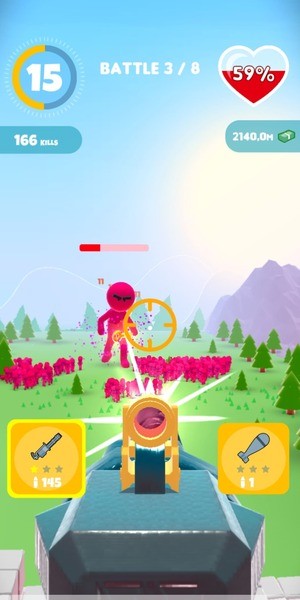 Crowd Defense meets players with the most common graphics made in two-dimensional format. You can find this picture in a large number of casual time killers, so the application from Ketchapp is not surprising in this regard. In addition, the project implements the sounds of shots from all types of weapons.

You will needs gold coins to improve weapons. It is possible to earn them for killing enemies, as well as for watching commercials. However, there is a much simpler option. It is enough just to download a mod for unlimited amount of money and immediately upgrade all available types of weapons to the maximum value.

Upgrading weapons in Crowd Defense is carried out in a somewhat non-standard way. You cannot pump a specific gun – system randomly chooses the weapon for improvement from all available. It is worth noting that you need to go through several levels to unlock all types of weapons, as money will not help to open them. 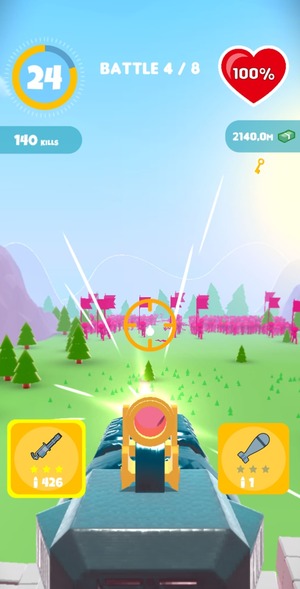 We should recall that the specialists of Ketchapp studio created this application. They are famous for delighting users with colorful and entertaining projects since 2014. To date, the studio has released over 200 arcade clickers and games in other genres that became hits in the gaming environment. As you progress through the levels, you open chests and choose one of three upgrades. For example, you can restore the vitality of castle walls if enemies have damaged it badly or you can reduce the reload time of your weapon.

Despite the fact that there are several types of weapons available in Crowd Defense, you will not be able to use all of them at once. Do not forget that the ammo has its limits and the enemies are advancing fast enough, so you don’t have too much time to think. Replenish your arsenal and meet your enemies with unprecedented firepower. Fight bosses and crush them using the most modern weapons. Complete all levels and save your castle from destruction!

Crowd Defense is a great game to kill some time. There are no exciting plot twists here, but you can enjoy simple gameplay and a lot of action.