Use your army of units in interesting challenges where you need to think of a strategy that allow you to lose as few fighters as possible and destroy the enemy in Crowd Evolution! Along the way, as the name of the project implies, do not forget to evolve and get more and more deadly weapons. You have to manage a crowd of unusual little men, whom you will always lead forward. Thus, you have to get to the finish line. You have to dodge various obstacles and increase your army many times over along the way. If you like simple and uncomplicated projects, then also download My Cruise and Epic Heroes – Dinosaur Control.

If you haven’t decided yet whether you should play Crowd Evolution! Our review should help you make the right choice. 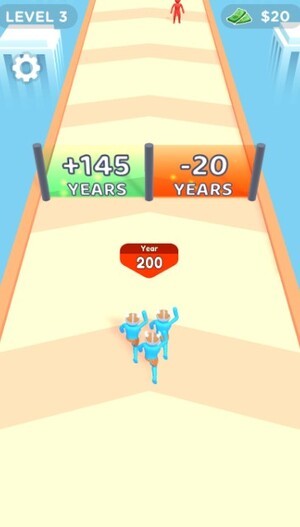 Build up your army

Feel like the strongest and wisest commander who is ready to enter the battlefield at any moment. Go through many trials of varying difficulty and defeat the army of a strong enemy. You have your own large army at the very beginning of this game. All sorts of obstacles and arches will be located on your way, which can both reduce the number of your units, and vice versa – increase. Everything depends only on you. Periodically change the position of your army in order to lose as few fighters as possible on the test field. Sometimes you have to choose between increasing the number of troops and entering a new stage of evolution. More on this in the next paragraph.

Here we come to the main feature of this project. The thing is that units become stronger in Crowd Evolution! This happens because on your way you will be able to meet arches that move you forward in time. If at first the units run just with their bare fists, then moving forward a hundred years you have clubs at your disposal. Even further and you will already have a primitive firearm such as a bow. In the end, you will be able to get a rocket launcher and destroy enemies with ease.

Reach the very finish line and a powerful enemy army will meet you there. Fight them in battle to get your well-deserved victory. If you lose this battle, then you will have to start all over again. Each next level will be more difficult than the previous one, so be prepared for difficulties in advance. You will not be able to pass the first time, as it is to better prepare for the next attempt. 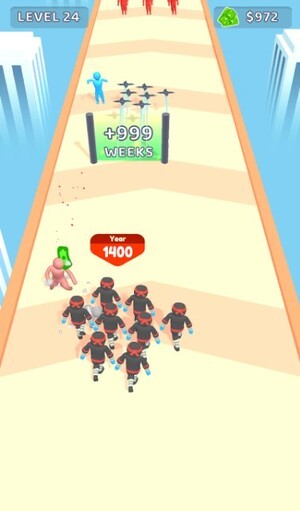 Defeat the enemy and get your well-deserved victory. You should also remember that after each level you could choose one of the improvements. You can increase either the initial size of the army or the size of the final reward. Both options are good. The choice, of course, is up to you.

The game has a very large number of ads, but there is a way to deal with it. It is enough to download the Crowd Evolution mod APK, which allows you to get free items without viewing ads. Here we are talking about various bonuses and improvements for the user.

Don’t expect that Crowd Evolution! will meet you with detailed training. To control the warriors, you have to move the screen from side to side. The first levels allow you to consolidate knowledge and skills, because they are not difficult.

You can also see the vibrating phone icon on the screen. He is responsible for turning the sound on and off in the game. Just below is an icon with a color. If you click on it, the wheel of fortune will start spinning and choose a different color for your little men. The possibility of rotation is not infinite, as you will be prompted to watch ads after a while. 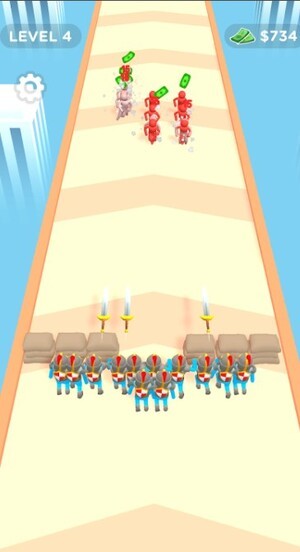 Crowd evolution! belongs to a large group of arcades with linear levels, not burdened by the plot. From the first moment, the goal is clear, the character/characters move in auto mode. Player controls the process with literally one finger. In this case, movement to the left to the right is available. In some cases, avoiding obstacles in the way is simply impossible. Another important aspect is evolution. Choose whether to increase the number of troops or evolve. This is extremely critical when fighting enemies.

Crowd evolution! is a fun and simple arcade game. During short levels, you can relax and have fun, and this game is not designed for more.