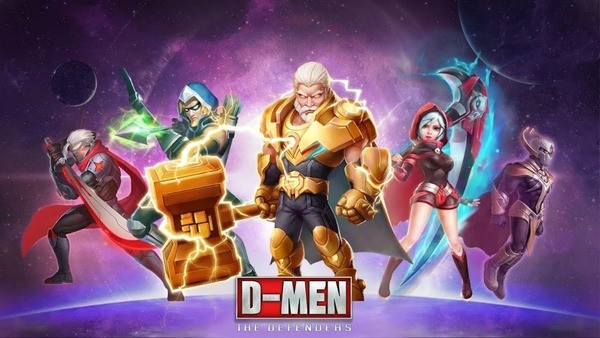 D-MEN: The Defenders is a strategy game with a diverse storyline developed in 2019. There are both tower defense and cooperative battles in various locations. In addition, the game has a large assortment of incredible superheroes, criminals and other personalities. Usually they prefer bright clothes and the use of rare talents in practice to defend or destroy something. Players need to choose a hero from an incredibly large range of options presented. It is necessary upgrade him to battle, communicate with other users and more. There are also automatic processes in D-MEN: The Defenders that make it possible not to waste time on trifles, but to move on to the most interesting. For fans of strategy and action games, we recommend to download Evermerge and Clash Royale.

Read on and find out about the main features of the game.

Many years ago, even before humans began to appear on Earth, titans and divine beings clashed with each other over the Realms oversight. In order to save the inhabitants of each Kingdom, the most powerful god closed the portal to both worlds. More than a thousand years have passed since that moment, but Hela broken seal herself! It’s time to defend not only your world, but also all the inhabitants that live in D-MEN: The Defenders.

Large assortment of weapons for battle

Develop your character’s mental and physical skills, adapt, and take to battle in D-MEN: The Defenders. Choose from legendary powerful villains from a diverse range of characters to confront the forces of evil. Your assembled team will fight and work even during your absence. You only need a couple of minutes to play daily, as your characters can non-stop defending the world and the orbs around you.

Choose and organize a strong and powerful team of legendary characters to protect our planet from armed interference. This modern new game combines the best parts of collecting your favorite characters and improving their skills and abilities. Defeat a whole mass of advancing opponents who have only one goal: to destroy your homeland!

The game has quite interesting, bewitching and curious graphics. All the heroes, their costumes and various small details of D-MEN: The Defenders have perfect rendering and don’t have very noticeable pixels. It is important to clarify that even at high settings, if the performance of the mobile device allows, the game graphics still have the highest level. The soundtrack, in turn, gives a frantic charge and adrenaline to a productive battle and the upcoming victory.

Like any modern game, D-MEN: The Defenders has own mod, which consist in inflicting powerful damage on enemies. Initially, in order to inflict strong and powerful blows on opponents, you need to invest game currency in this.

Why there are no unlimited money feature? The game currency here costs practically nothing. You can use it only in few game modes, because the game emphasizes on battles. Here it is wiser to add a modification for constant high damage to opponents in the hacked version.

We tested D-MEN: The Defenders on our Android devices. Based on the results, we can confirm the correct and high-quality operation of high damage mod. Now, you can kill all your enemies with one hit. Therefore, the story playthrough won’t cause you any problems. D-MEN: The Defenders is a vibrant and lively simulation game that combines elements of such well-known genres as tower defense, RPG and card game.

In the distant past, when divine beings still filled the planet, fierce wars broke out between them. The most powerful of the Gods saved inhabitants of the worlds, closing the entrances to the worlds with a seal. However, after a millennium, monsters destroyed the seal. Form a team of legendary heroes to protect the Earth inhabitants from opponent’s invasion. You are the commander-in-chief. Your task is to improve the skills of your characters, their development and pumping in all aspects, as well as competent defense and containment of constant enemy attacks.

D-MEN: The Defenders is an interesting and exciting multi-genre strategic project that includes both role-playing and card games, as well as constant battles and protection from attacking enemies. Thanks to high-quality graphics and stunning soundtrack, the game stands out among others. So many special effects during a battle can hardly be seen anywhere. Moreover, the most important and by no means a pleasant bonus for constantly busy people are automatic modes. The user doesn’t need an eternal online mode. His characters can fight in a non-stop offline format. Bring gold and numerous victories, paying only a few minutes a day to play the game.

How to Install D-MEN: The Defenders Mod?

Don’t forget to delete the original version of D-MEN: The Defenders before installing our modified version to prevent errors during installation process.