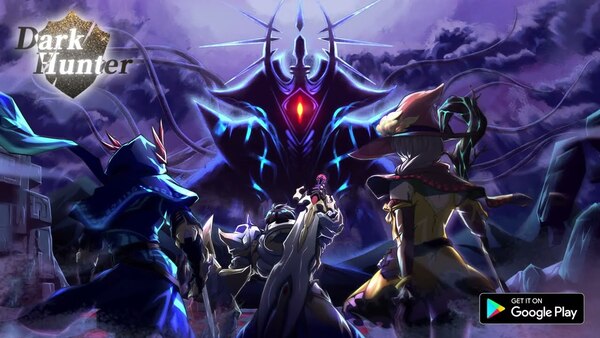 Dark Hunter: Idle RPG is an RPG from Loongcheer Game studio. As part of the gameplay, take on the role of the commander of a small detachment, which you need to pump and supply with new equipment and recruits. You have to fight the demons and drive them out of this world. The focus of the developer here is on the number of modes, an interesting combat system and close interaction with other players. Go through a long single-player campaign, which closely interacts with the mechanics of Idle. This mechanic involves the passive extraction of experience, resources and equipment. If you like role-playing projects then download also Earth Inc. and Survivor In Rainbow Monster.

The gameplay will offer you to delve into a deep role-playing system that involves both the extraction of new heroes and their multifaceted pumping.

Control a squad of great heroes

The gameplay of the project largely repeats the “foundations” that were laid down by many Idle-RPGs that came out before Dark Hunter: Idle RPG. The user controls a squad of several heroes. The battle proceeds completely automatically, the characters independently choose the moment when they need to use skills, which target to attack.

You can only prepare a squad for the next enemy by changing its composition and equipment on the fighters. Another distinctive feature of such games is the rewards that the user receives even if he is offline. All sorts of bonuses will allow you to quickly join the gameplay, upgrade the first few heroes, after which the passage will proceed much easier.

At your service in Dark Hunter: Idle RPG are six characters, as well as subclasses divided into factions, classes, and rarity levels. For example, heroes with three stars are ordinary fighters that will be useful to a beginner or to those who collect a complete collection of warriors available in the game.

There are also rare, epic and even legendary characters, presence of even one such fighter in the squad may well turn the battle around at low levels. If we talk about the main characters, then there are six of them: Warrior, Witcher, Mage, Master of Beasts, Necromancer and Knight.

Since there are a lot of characters and subclasses, you can assemble just such a squad that fully meets your ideas about the battle. Before the fight, you will be able to assemble a team of your most pumped heroes. You should also take into account which characters will oppose you, because each local fighter belongs to a certain element. Belonging to the elements implies that the character has a certain list of bonuses and debuffs. All this dramatically affects the battles.

Download mod for unlimited money and diamonds to get as many bonuses as possible in Dark Hunter: Idle RPG.

The first time you enter Dark Hunter: Idle RPG, you can get some random characters needed to start the mission. Each character has its own rank, indicated by several stars. The most powerful and desirable heroes have five stars, and it takes a lot of effort to achieve this level. Achieve such a result only by collecting many special scrolls.

Before each confrontation, it is necessary to assemble a new squad, where you need to focus not only on personal characteristics, but also on a combination of skills. It will take a long time before you can effectively combine heroes. In addition to the usual attack, you can use a special skill that activates after the energy scale is completely filled. Do not immediately use it, it is better to wait for the right moment.

Dark Hunter: Idle RPG is a very interesting role-playing game in which there are many options for developing the hero. If you have been looking for something like this for a long time, then be sure to pay attention to this project.