Dawn of Titans is a turn-based strategy game in which you become the owner of your own city and army. The main task is to constantly develop the settlement and create an invincible army to protect and seize neighboring lands. Characters are titans from the ancient epic, who will lead your troops. Each character has a set of unique characteristics, its own strengths and weaknesses. Enhance it with relics and gradually upgrade. The construction of a city is in many ways reminiscent of similar strategies: build fortifications, workshops, barracks, etc. In addition to the main buildings, you have to build a room of the Titans, where you can improve, review and dismiss the hired heroes. For strategy fans, we also recommend downloading Rome Empire War and Alien Creeps TD.

Your empire is in danger – aggressive giants threaten to destroy everything to the core! Download Dawn of Titans and create an invincible empire with powerful armies.

There are users for whom it is important to see the story in games. The storyline that develops throughout the gameplay certainly gives the game an extra exciting moment. If we talk about the strategy genre, then be sure that history was, is and will be. Dawn of Titans tells us that there were powerful Titans in the world, which power was difficult to compare with anything that existed on Earth. Perhaps with divine powers. One day they left. Nobody saw them for a long period. 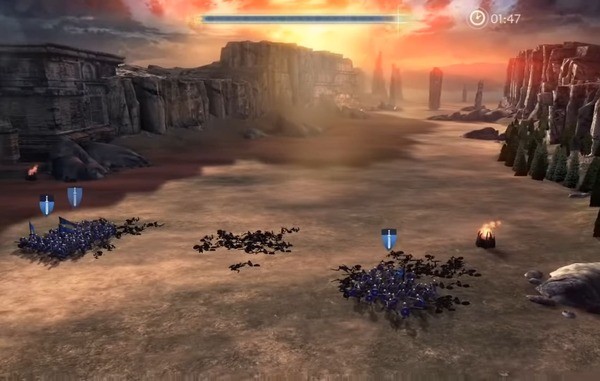 You know how unstable the times were. Wars and attacks were commonplace. The game developers offer the user to plunge into the atmosphere of those years. A whole kingdom falls at your disposal, which hopes for a ruler in calm and turbulent times. As it usually happens, an enemy lord, whose army makes you nervous, attacks you. There is nothing left but to turn to divine powers for help. Summon Titans in the Temple. A miracle happens! One of the Titans responds to your call, and your army becomes more powerful and confident on the battlefield.

The battle outcome is in your hands

We have always liked strategies that give you the ability to control your army, choose a target to attack, and so on. Get complete freedom in Dawn of Titans – you can control a titan and choose whom he will beat. Follow each of the squads, choosing an attack target or route. This makes it possible to think, create some kind of your own tactics. It is interesting and it gives you the opportunity to win not just at the expense of the army, but also at the expense of your talent as a commander. In addition, the process of the battle itself is very cool – you see how enemies and allies die, fly into the air from the blows of a titan.

The army in Dawn of Titans consist of soldiers led by a titan hero. You can hire them in the barracks and in a special hall. The battle begins with the placement of troops on the map. During the battle, you will indicate direction and target for each attack. An automatic combat mode is also available, when units attack the nearest opponents on the field. The battle process is as detailed as possible: you see the movements of each soldier. Weapons and armor are drawn in detail, and the physics of movements is close to real.

Epic buildings at your base

Separately, we would like to praise the attention of Dawn of Titans developers to the buildings. You have your own city or rather an island floating in the air, where you can construct buildings and get an increase in resources. However, if in all games the same barracks is just a house from where the soldiers come out in hundreds, then here it is really a training ground for soldiers. There is place where they sleep, get some kind of movement on the training ground. The temple is really a temple with towers and turrets and glow inside. Such little things attract the user and make the atmosphere more attractive. 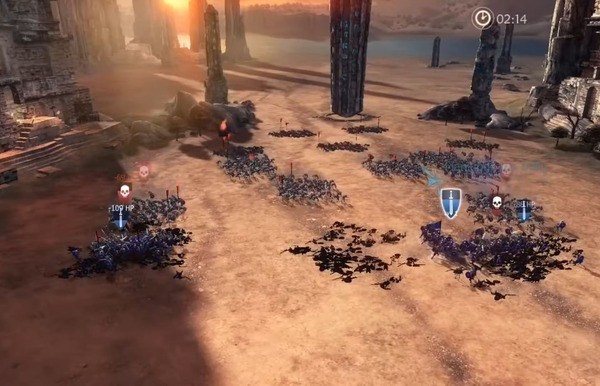 All objects in Dawn of Titans are three-dimensional, that is, no flat characters, buildings, decorations. All the buildings, and there are a lot of them here, all the warriors, all titans, trees, bushes and grass – everything looks so beautiful and realistic that sometimes you wonder what a smartphone is capable of in this regard. Add effects, all kinds of flashes, fireworks, glow and you get a project that you just do not want to break away.

It will take money to accelerate the development of your base and increase the combat power of the units. However, you can do without them by downloading the mod for free shopping. Important! You can get banned for using the mod, so use it at your own risk.

Upon entering Dawn of Titans for the first time, you will be able to complete the tutorial. Choose two paths of development, namely, to pursue own plot line or to enter into an already existing union. The second option allows a quick start (allies have won, and the level is growing for all team members). There is a chat inside the application for communication.

Get possession of the army and surroundings necessary for protection from the dark forces. However, the army will be small in number in the first minutes and the strength is minimal. The goal of Dawn of Titans is to develop warriors and territory. If the army is weak, then it will not work to protect the people. 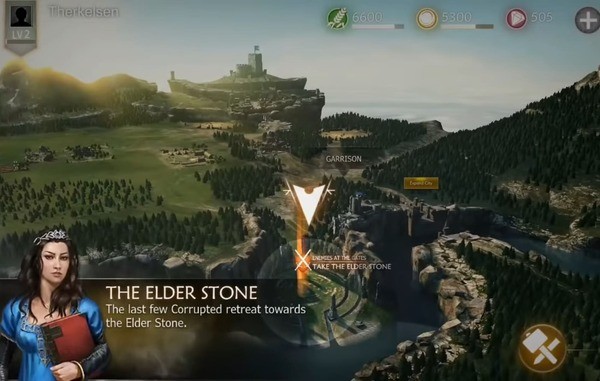 In addition, the army needs to capture neighboring lands. Use them in the event of a shortage of vital resources. Raw materials help to develop, which means that it is impossible to do without capture. It is necessary to think over the line of development in order to use the entrusted and newly seized territory efficiently. Every day the gamer receives quests that help him not to get bored. You can get bonuses, relics that will help you develop.

The main characters of Dawn of Titans are the titans, who lead the player’s army. They are very strong when properly upgraded. Each of them has its own characteristics. To clearly lead the line of defense, you need to understand how best to combine the heroes with each other. The safety of the population depends on the chosen strategy of the gamer.

There are no special differences during the construction of your citadel. Use standard controls in games of this genre. Gradually, you get access to various buildings, which, as the levels rise, need some pumpimg.

The game turned out to be gorgeous in all respects. A cool picture, many buildings, islands floating in the air and dynamic battles – all this is worth downloading Dawn of Titans.