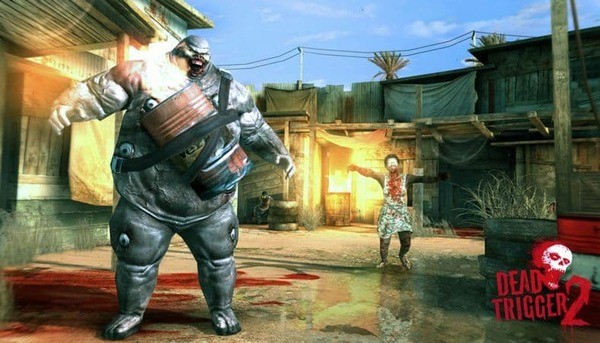 DEAD TRIGGER 2 is a classic first-person shooter, where the player needs not only to shoot at enemies, but also to carry out a mission to free the game world from the living dead. In addition, you have to rescue the gape of fellow travelers, who from time to time may ask you for escorting to the territory of a safe base. By the way, the player can get access to the base, where it possible to take a break, improve performance and acquire new weapons and ammunition. DEAD TRIGGER 2 is a dynamic and slightly dangerous world that delays from the very start! You can also practice shooting zombies in Unkilled and Zombie Gunship Survival.

Matchingham Games released DEAD TRIGGER 2 in 2013. During its existence, the game collected more than 50 million downloads, and its rating is 4.5 points. The age limit for players is 16+.

DEAD TRIGGER 2 allows players to face with extremely unattractive enemies. Although most of the zombies are stereotyped, during the walkthrough of some missions you can come across unique specimens that can seriously scare you. However, with getting new levels and strengthening nerves you may even assemble something like a collection of unique monsters. By the way, you can share your findings with other players. DEAD TRIGGER 2 has a well-developed community, both within the game itself and on other platforms as well. 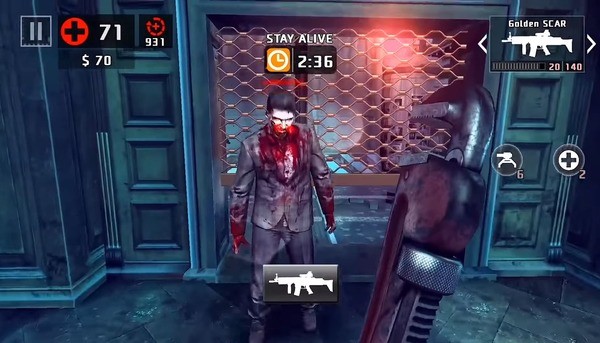 The creators have made sure that the player could feel comfortable in DEAD TRIGGER 2. That is why you can choose among different modes to play. For example, you can play a mode where you don’t have to contact zombies and just shoot them from a distance. You can try to break through the crowd of evil monsters, or you can choose a mode in which you need to shoot enemies for a while. The player can alternately choose certain modes to feel the game beauty and become a real zombie exterminator!

The player in DEAD TRIGGER 2 has a truly rich selection of everything that is only available as part of the gameplay. First, you can equip yourself with a variety of machine guns, pistols, shotguns, dynamite, sniper rifles and various weapons for close combat. In addition, according to the storyline, you can play huge variety of missions with different goals and objectives. There are also additional tasks that you don’t need to complete necessarily. The game has no punishments for ignoring such quests, but the player may lose the opportunity to earn in-game currency and rare artifacts.

The graphics in DEAD TRIGGER 2 are very impressive. Despite the project release date, graphic design remains dynamic and frightening at the same time. The creators worked out zombie movements and appearance to its best. You can also note the good detail of all game elements, including weapons, which you can not only use, but also admire. Project has good special and visual effects, which makes it attractive and addictive. The sound corresponds to main theme, emphasizes the gameplay and provides full immersion effect with light elements of horror. 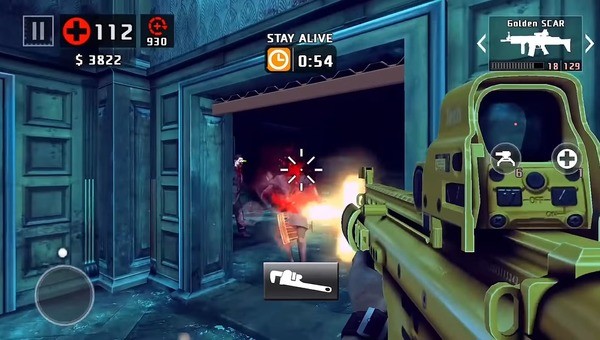 You can level up and go on the road with confidence only with the help of in-game currency. However, game money, gold and ammunition, as usual, are not enough, so it is better to install DEAD TRIGGER 2 with a mod for gold, money and ammo. It allows you to go through difficult levels faster and more confidently.

We confirm that after installing mod, you can use a special menu. After turning it on, the player can activate unlimited supplies of gold, money and unlimited ammo. However, you can disable above-mentioned functions at any time if you want to complete DEAD TRIGGER 2 on your own. There is probably no point in explaining benefits of using our solution. We can say only one thing for sure – with money, gold and unlimited bullets, your adventure can become easier. Don’t worry, installation file is safe for your gadget, as our team has checked it with antivirus software.

DEAD TRIGGER 2 is a well-done project, loved by users for its relative simplicity and variety. Player has to wander through American cities and destroy zombies, who are striving to tear off a piece of living flesh. During the walkthrough, the player can rely not only on himself, but also on help from the developers, who added many positions for improvement. You can upgrade characteristics of your hero, types of weapons and the number of ammo. 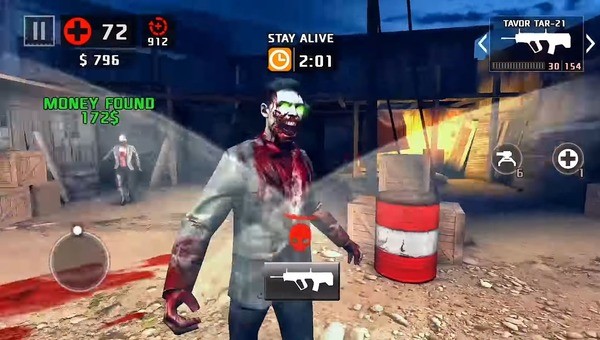 The gameplay is simple, as all controls are intuitive. Good interface helps you quickly understand even those gameplay moments, which can be difficult at the beginning of your journey. DEAD TRIGGER 2 requires a permanent internet connection. The storyline is striking in its globalism. The goals can be very different. Save survivors, reach evacuation points, break to treasured supplies while destroying formidable monsters, rebuilding barricades and much more. The developer claims that the game boasts six hundred unique scenarios. It is hard to believe, but the plot locations are different.

DEAD TRIGGER 2 also includes multiplayer mode. You have the opportunity to participate in multiplayer arenas and global tournaments. Arena allows you side to play by side with other gamers and hold back waves of enemies. This mode cannot forgive mistakes, so only a well-coordinated team can find the key to victory.

DEAD TRIGGER 2 is a frighteningly beautiful first-person shooter.  The game allows players to relax and let off steam, fighting with bloodthirsty and scary zombies!

How to install DEAD TRIGGER 2 Mod?

Don’t forget to delete the original version of DEAD TRIGGER 2 before installing our modified version to prevent errors during installation process.