Deliver It 3D is an exciting game from the famous studio VOODOO. In it, you will play the role of a deliveryman who will drive along a clearly defined route, trying to deliver the goods. Cross dangerous highways and roads and try not to crash into oncoming traffic. Sometimes customers will meet you on the way, you need to stop in front of them and give them a few boxes of cargo. Be ready to pump some parameters to improve their performance at the end of the level. Do not forget about the skins, which are a huge number in the project. If you love VOODOO studio, then download also Fashion Universe and Cooking Craft.

In a short time, Deliver It 3D has been downloaded over 5 million times. The average rating of the game is -3.2 points. Such a low rating is due to a large number of advertising. 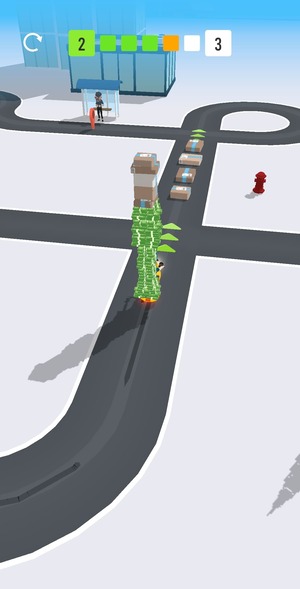 In fact, Deliver It 3D has some of the hallmarks of a racing game. You are a courier on a motorcycle who has to collect money and get from point A to point B. To start moving, just press and hold your finger on the screen. Having overcome a certain distance, the player will encounter some obstacles. It could be car traffic, a train, or pedestrians crossing the road in front of you. Here it is important to be careful and stop in time. If you crash into an obstacle, you will lose all the cargo. Otherwise, the level may even end. Move gradually from location to location. The task will become more difficult, but the reward will also be higher.

Like many applications of this kind, Deliver It 3D has a leveling system. It is not very flexible and large, but still. Therefore, you can improve some parameters of your character for dollars. This is the speed of the player on the road, the capacity of his luggage compartment of the motorcycle, as well as the level of income. Earn dollars during your missions. The fact is that the courier gives most of the fee to the authorities. However, he leaves a certain percentage for himself, which he can spend then on upgrading his skills.

Another important aspect is the presence of a large number of colorful skins. Players can choose among numerous kinds of different skins and apply them to his vehicle as well as the pilot. It is worth noting that initially all of them are locked. You will be able to buy a random skin by paying a certain amount of dollars. However, it may be better to spend them on improving the performance of the courier – it is up to you to decide. This will not have any effect on the gameplay. However, you can highlight your character in this way. 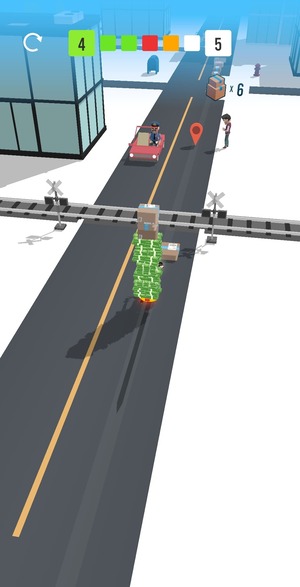 As in all other projects from VOODOO, Deliver It 3D has primitive graphics, as well as a very simple soundtrack. The main thing in the games from this developer is the gameplay, and everything is OK with it.

As already mentioned, the application has many ads, which annoys users. That is why the game has such a low rating, and there are many complaints from players. To fix this, download Deliver It 3D mod, which removes all videos from the project. By the way, it also give you unlimited money to spend on skins as well as upgrades.

Get on your motorcycle, buy goods and deliver them to the customer to make your first profit and continue delivering goods around the city. Become a real businessperson who delivers cargo to his customers and earns money for it. Therefore, you can use the motorcycle and go for your first task at the very beginning of the game. 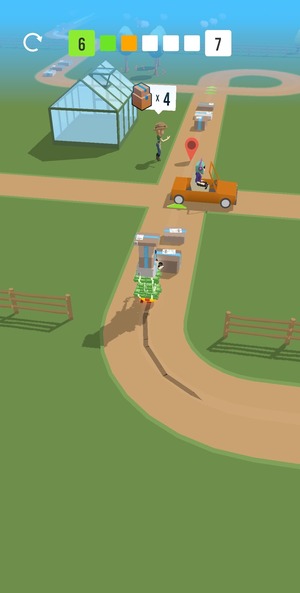 With the money you earn, you can already purchase expensive parts for your motorcycle to get even a lot more money. Constantly upgrade your vehicle so that you can drive around the city as quickly as possible. However, be extremely careful, do not get under the wheels of cars and do not knock down pedestrians themselves. Over time, you will accumulate a lot of money and become a real tycoon.

Follow the map of the city to know where to deliver food. Using the arrows on the screen, you can go straight or turn your car around. Complete levels and get nice prizes and rewards.

Deliver It 3D is an interesting game that is perfect for killing some time. It has an age limit of 7+, so almost everyone can play this application.