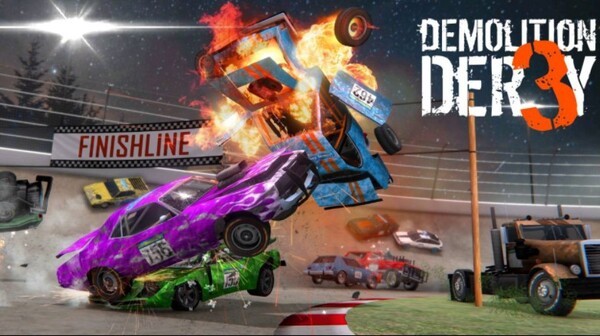 Demolition Derby 3 is a game in which, in addition to the usual racing mode, there is another one – derby. A similar scheme has already been in several games. They also did separate projects for the sake of one regime. CarX Drift Racing 2 is about drifting, like FR Legends, and Real Car Parking 2 is about drag racing. In turn, the Demolition Derby series puts the derby at the forefront. In this mode, cars fight in the arena, trying to ram and destroy each other. Fans of the Flatout game are familiar with this type of games. It is important not to be the first to reach the finish line, but to remain the last one alive on the court.

The Demolition Derby series are famous to fans of mobile hard racing. The two previous parts consistently developed their idea, and it was the second that became the most popular in the series. Demolition Derby 3 added new features: multiplayer and single player campaign. Coupled with all the familiar features of the old parts, the sequel can become even more successful than the second part – at least the game has such potential.

Each gamer is given the opportunity to choose one of more than fifteen vehicle variations in several control categories. All options are available for upgrades. For this, you need to go to your workshop and add the necessary elements. Here you can increase the performance of the machine or improve the appearance. Therefore, your car will be unique in Demolition Derby 3. 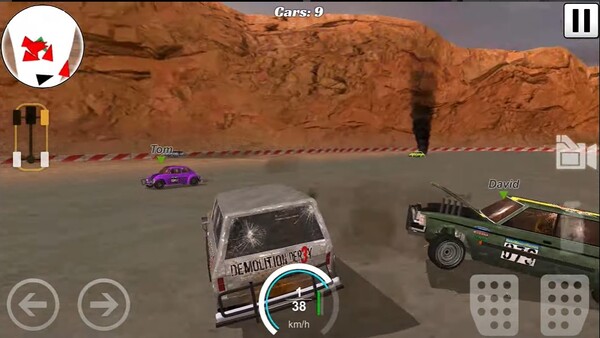 Improve performance of your vehicle

Garage allows you to customize the available car as you wish and according to your preferences. However, it is better to start with a more powerful engine or even abandon the improvement in favor of a more powerful vehicle. View vehicles in the form of a collection or click on the arrows right in the garage, viewing the characteristics.

Change tires, re-paint the surface and reinforce the body of the car. The free ride mode, available in Demolition Derby 3, is not bad at all. Any car is capable of accelerating to a prohibitive speed. In other modes, it is limited in accordance with the technical characteristics.

Take part in a crazy derby

Derby mode looks simple but exciting. Six cars simultaneously start from different points of the arena to its center in order to destroy each other. You can either drive in a straight line, ending up in the center of the mess, or skip the starting batch, acting according to your strategy. In principle, no one bothers to ride in a circle, waiting for the rivals to destroy each other. As a result, there will be only one and it will not be so difficult to cope with it.

Every day, Demolition Derby 3 offers a specific task that you need to be complete during the battle. For causing damage to opponents’ vehicles, you can receive bonuses and rewards. Spend them on improving the characteristics of your “iron horse”, because the victory in the entire race depends on it. 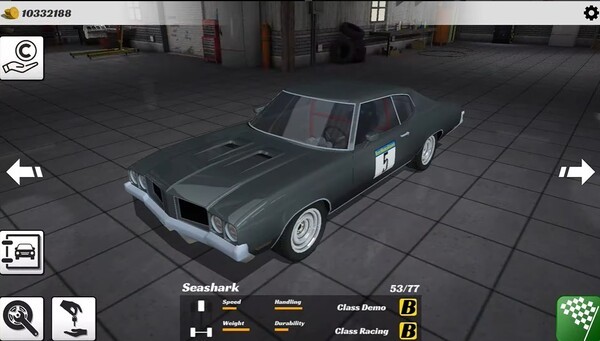 The abundance of tracks and arenas in Demolition Derby 3 is undoubtedly pleasing. Arenas can be large or small, somewhere you can interact with the environment, and some are even very funny, for example, a circus. The tracks are all unique – you have to ride in the dirtiest and most arrogant conditions and enjoy the calm city roads.

Developers implemented very cool graphics of the cars. You can easily feel the suspension, car can roll over, wheels fly off in collisions, huge dents appear and whole body begins to shake and fall off. The soundtrack in the game is the most appropriate – a very adrenaline and at the same time, a funny melody accompanies you throughout the game. Take the sounds of the motors quite seriously, as you can feel some kind of unknown power in them.

Despite the primitiveness of the gameplay, it is extremely difficult to earn in-game currency in Demolition Derby 3. On the other hand, the desire to open a new track or upgrade your car will not go anywhere. In order not to go through the same races several times, we suggest you download our mod for unlimited money. Now you can easily afford the most expensive upgrades and cars.

When you start Demolition Derby 3 for the first time, the meager design of the menu is striking. Everything looks rather poor and cheap: buttons, labels, style. However, everything changes when you enter the race. Obviously, the authors threw all their efforts into really important things. The cars run cool and look decent. With the proper imagination, you can fell every encounter almost physically. This always increases the game’s motivation and general enthusiasm for the process. 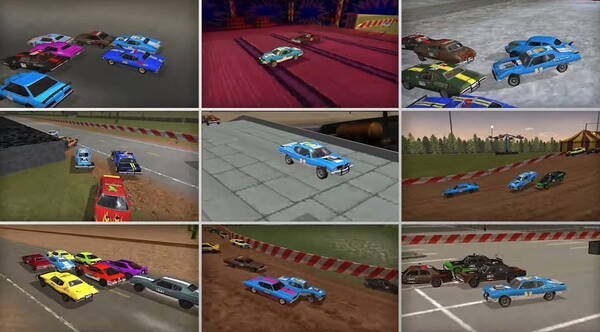 The game offers users two main modes. In addition to the derby, there are also races, which rules are known by everyone. However, the main mode, standing by default, is derby. It is not for nothing that this word is present in the game name.

Initially, there are two derby arenas and two racing tracks available. In both modes, it is possible to make minimal adjustments. Derby allows you to change the number of your opponents. By default, there are five of them. In races, you can adjust the number of laps passed in one run.

There is also a garage in Demolition Derby 3 where you can buy new cars. Initially, you get a rather weak car, which looks consistent with its characteristics. If it is still suitable for derby, then in the racing mode it is quite difficult.

In order to afford a new car, you need to accumulate a sufficient amount of gold coins. Earn them by getting into the top three in one of two modes. Derbies also bring some gold as a reward for collisions with other opponents that caused them damage. It makes no sense to sit back – fight is not only fun, but also profitable!

Survival racing has always had its connoisseurs. Indeed, you can neutralize the lack of racing talent or a fast car. Demolition Derby 3 is a great way to have fun and while away the time. Thanks to various missions, the game does not get boring for a long time. The increasing level of opponents helps to improve skills and constantly improve.