Disney Magic Kingdoms is a colorful city-building simulator that allows you to travel to the world of your favorite Disney characters and create amusement park of your dreams. Resist the evil magic of famous Maleficent, who tirelessly damages the Disney Kingdom. Act together with Mickey Mouse and his friends and use their capabilities to construct, decorate and improve the park. Plunge into the fairy-tale world of Walt Disney characters in this addictive game! Moreover, we advise you to play Dragon Mania Legends and SimpleRockets 2.

Gameloft created Disney Magic Kingdoms in 2018. The app has over 5 million downloads and has a 3.9 rating. The age limit for players is 3+.

From the very beginning of Disney Magic Kingdoms, gamer finds himself in a gloomy and overcast place with depressing sounds and colors. It turns out that this is tricks of evil sorcerer. Mickey Mouse cannot cope with the problem alone because of witchcraft. You need to help the main character and free up the territory of Disney park along with famous characters so that Disney World could work again. Your assistants can not only save the park from evil magic, but also perform small tasks to reach the main goal quickly. 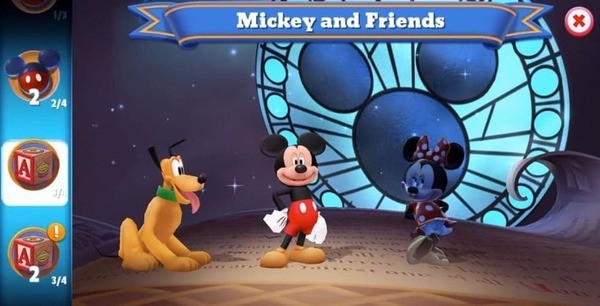 Disney Magic Kingdoms offers the player a gradual and phased development. Although the gameplay is clear and plot is almost familiar, you still need training to make the right decisions on the strategy for freeing territories from evil spells. That is why you should not ignore prompts and skip dialogues, as one of them can contain important information. With the growth of player’s level, the tasks difficulty also increase. However, you can use already freed assistants to complete difficult missions. In addition, you can ask help from your allies. The help is not very significant, but it is still help!

Any action in Disney Magic Kingdoms costs game currency, but even small wins can bring you rewards. There are several types of currencies in the game: manna, crystals, tokens, as well as items for change of seasons, for example, pumpkins. The most common type of in-game currency is manna that you need for construction of buildings. The most inaccessible are crystals that can unlock a good character. Another currency is chests, which you can obtain for achievements. The chests contain the necessary items, crystals and even manna.

The graphic design of Disney Magic Kingdoms is commendable. The general style of graphics has good quality and copies characters and cartoon characters. Developers drawn special effects with a special passion, providing colorful animation of all game processes. In general, the sound design matches the general game style. 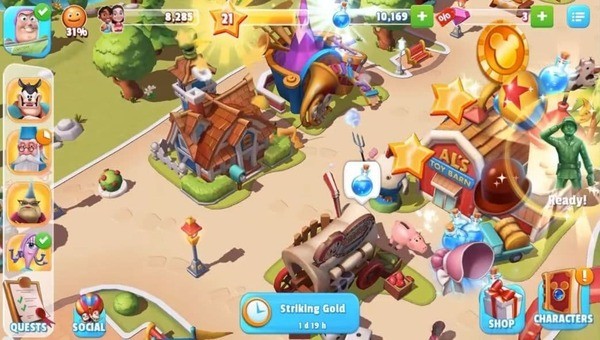 The main task in Disney Magic Kingdoms is to build an entire amusement park! Disney World can work again when the player overcomes all the obstacles created by the sorcerer. The gamer needs not only the help of game heroes, but also rewards in form of game currency and crystals. By the way, the latter allow you to open strong characters who can help in the arrangement of Disney Kingdom. Crystals, however, are not easy to obtain, therefore creating a challenge for players. Download Disney Magic Kingdoms with a mod for crystals that allows you to assemble a complete collection of game characters and quickly cope with the witchcraft.

Our team has checked Disney Magic Kingdoms and its mod. Indeed, after installing the game on your device, you can use an unlimited number of crystals for a more convenient and enjoyable game. How you spend them is only your business, although due to this features you can acquire many familiar characters, as well as a variety of interesting items that can come in handy during the walkthrough. Install the app following our recommendations below and go on an adventure.

The tasks in the game are extremely simple. For example, the first thing Mickey Mouse should do is to look for clues to figure out what to do. The player is only required to select task and start it. Completing tasks adds magic points to the player’s account. You can use it to drive out the dark forces from the park. Having collected the required number of magic points, the player can sequentially clear each part of magic kingdom. Such actions won’t please the main game villain. However, he is powerless against our heroes – other Disney characters can join Mickey after completing few levels! 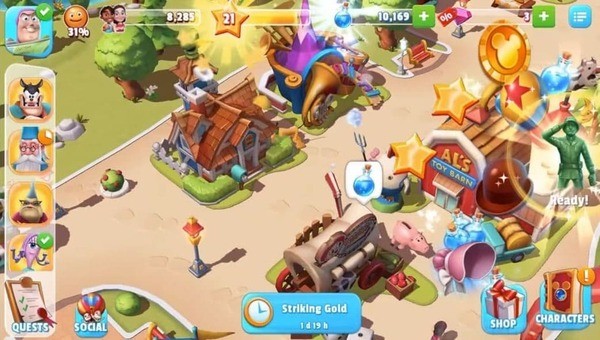 The park should also have attractions. Having accumulated enough money, you can go to the store and choose the desired attraction. The Ferris wheel becomes the first available for purchasing. After clearing the area of ​​darkness, you can install a Wheel on it and attract a few visitors – a small but important step! Thus, collecting friends, completing simple missions and rebuilding the park, the player can fight the villain and his magical powers in Disney Magic Kingdoms.

Disney Magic Kingdoms is a kind game about magic that allows you not only to conjure, but also to build an amazing, bright amusement park! Welcome to an exciting game that can return you to a happy childhood with Disney characters, even for a few minutes!

Don’t forget to delete the original version of Disney Magic Kingdoms before installing our modified version to prevent errors during installation process.